You are at:Home»Car Show»Goodwood: Revival by Name, Revival by Nature
By Ronan O'Dornan on September 26, 2022
Tweet

September typically draws the summer to a close, with the kids back at school and the evening light waning just that little bit earlier. Sometimes we are treated to a few sunny days as the summer waves us off and slips into the distance, like that car you had no business trying to keep up with after an unplanned drag race at the lights – a race in which the other driver didn’t even know they were participating.

Well, there’s a gobanful of good events in September that do the same by providing us petrol heads with a few last hurrahs before we are met with dirty roads, wet weather and eventually grit and salt.

Anyone who has even the slightest interest in anything automotive knows about Goodwood Festival of Speed and rightly so. Even those who have never attended will inevitably see content and news from the event every year as brand new cars are unveiled and notable cars from history are thrashed up the hill climb in Goodwood estate. The Festival of Speed is the most eclectic automotive event I have ever attended, that’s for sure. I’ll never forget the first time, when I stumbled upon Ayrton Senna’s actual Lotus 97T John Player Special F1 car. The car was running and a lone mechanic was balancing the carbs before it and others would head up the hill later that morning. Mesmerising to say the least! 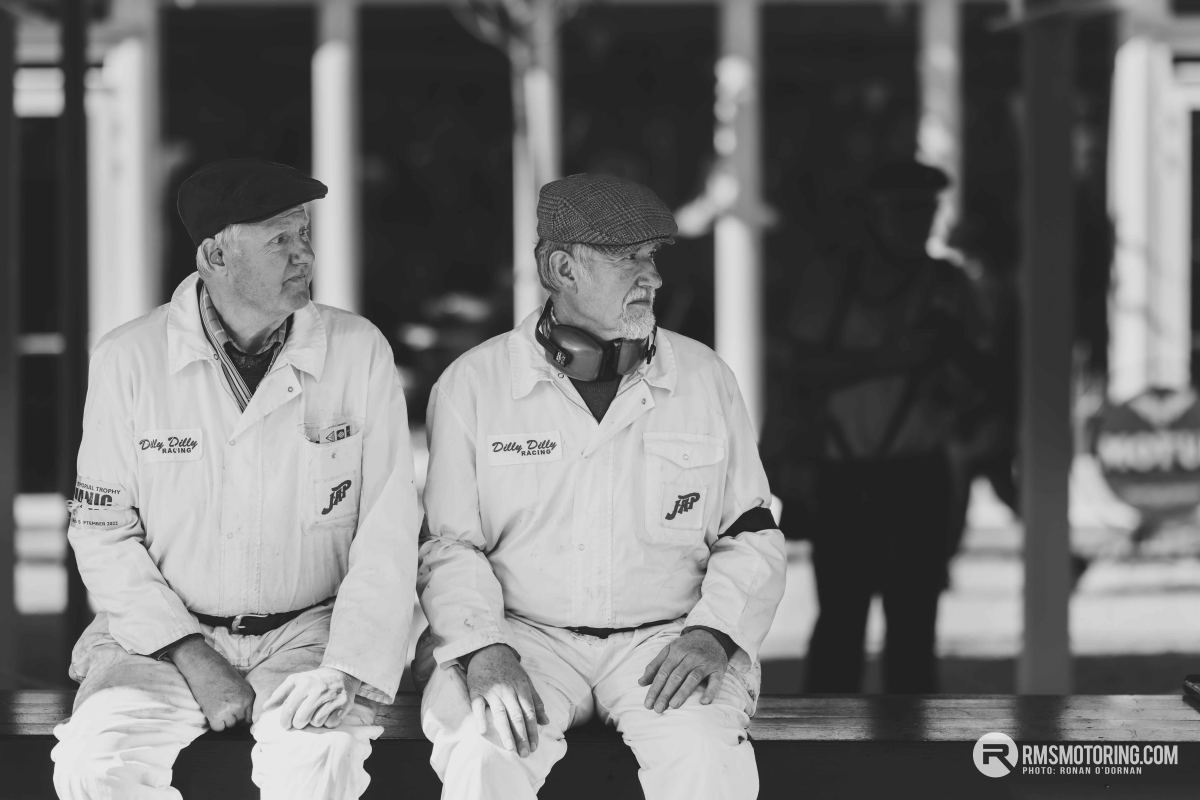 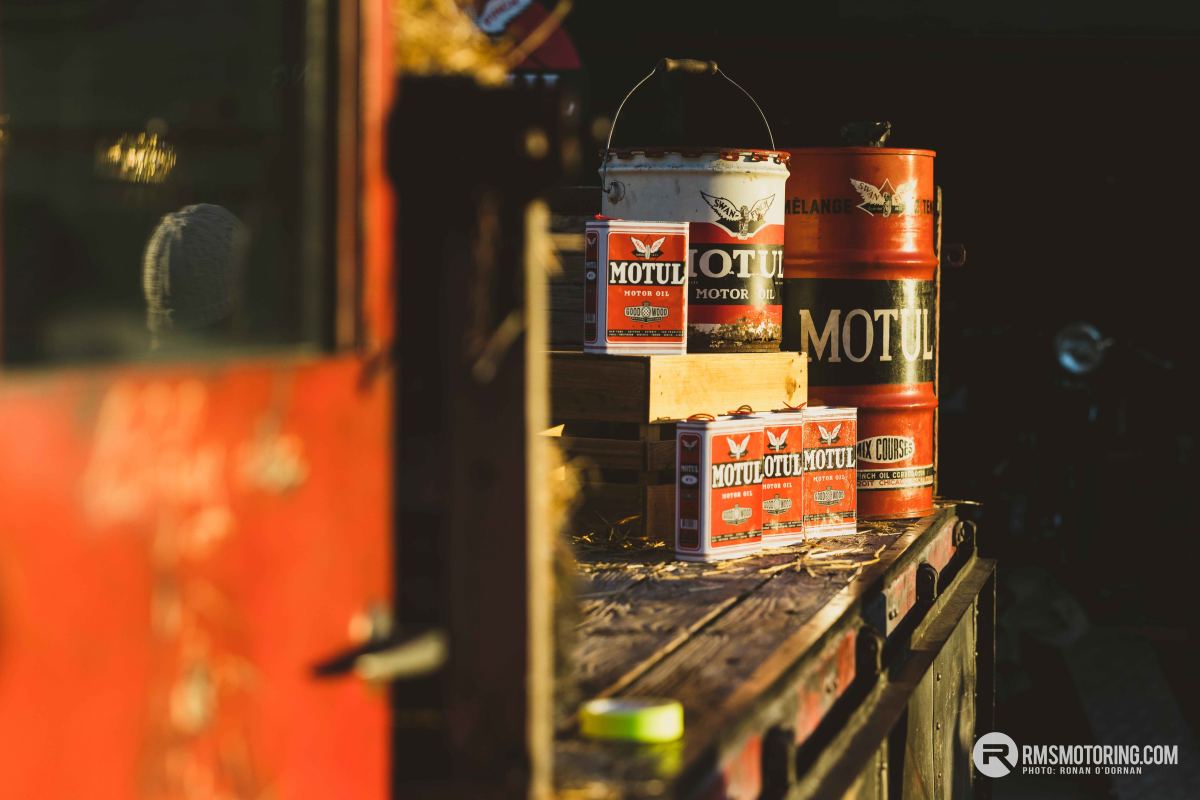 A few years of FOS attendance followed, with each one brimming with countless memorable moments. One thing not often mentioned at the FOS was its smaller brother if you like, “Goodwood Revival”. Now, I had heard of Revival before and remember my uncle John recording it on the television to show me the classics racing the circuit, usually Minis four wheel drifting, two abreast, round a sweeping bend, or a handful of priceless E-Types fighting for the racing line. So I did have a rough idea of the character of the event. I added it to the bucket list and figured “I’ll get to it one day”. 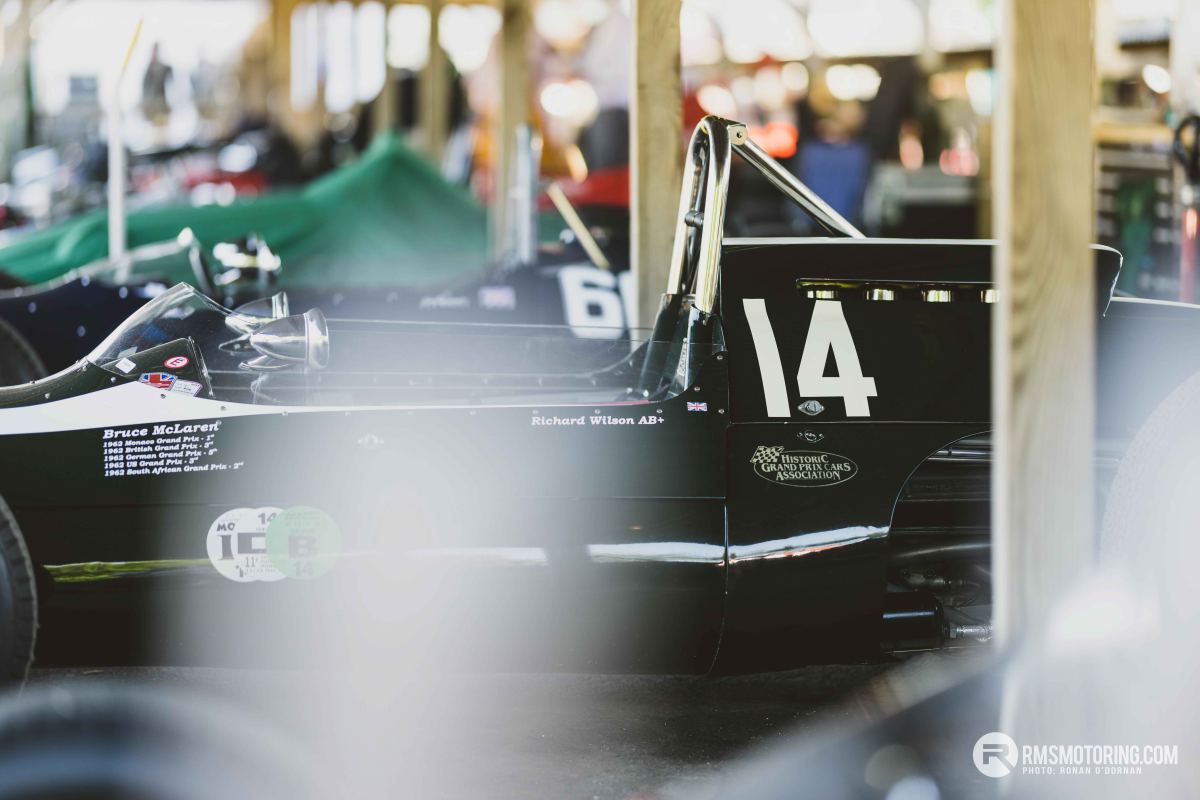 That brings us to the start of September, when the opportunity arose to attend Revival as a Partners’ Guest of one of the major sponsors. I did not have to think twice, I booked flights for both myself and a friend and packed my gear.

A flight, a dodgy air B&B, 1940s attire and a short drive later, I found myself arriving at Goodwood Estate in the absolutely gutless, lethargic, gravelly three-cylinder Corsa rental that felt like it cost more than the monthly payment on a Veyron. Gone are the days of a £45 a day car rental. 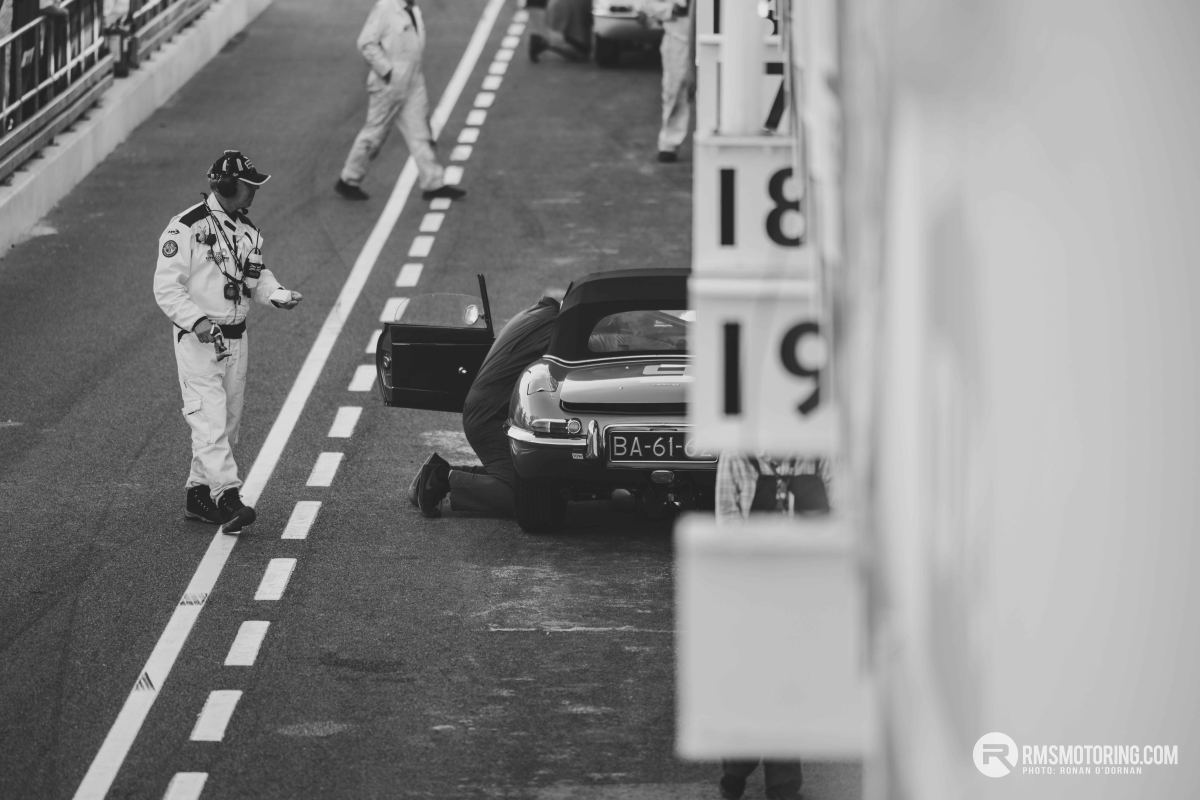 My bitter disappointment in the automotive potential of the Corsa disappeared instantly as soon as I heard the unmistakable sound of three Rolls Royce Merlin-engined Spitfires passing overhead in formation – a sound that could only be compared to a grizzly bear riding a lion into battle. What a way to start your weekend. And yes, I did uncontrollably start humming the theme tune to the Battle of Britain film. I made my way through the grounds to the Media Centre beside the Paddocks, on my way passing all of the period stalls and displays. Taking in my surroundings and the attire both attendees and staff were wearing, my initial thought was, “I feel like I’ve stepped back in time”, although I quickly reminded myself that, being from Ballymena, I was used to things being backward!

What ensued could only be compared to giving a drug addict access to an unlimited supply for two days. The sound, the smell, the people, the cars all made for a completely intoxicating cocktail of automotive enjoyment. It dawned on me that this was all the best bits of the Festival of Speed but stretched out over three days. Don’t get me wrong, I appreciate a new car as much as the next man, but what really excites me is the classic raw racing that Revival is constructed upon. The Le Mans winning GT40s, the unmistakable shape of a Ferrari 250 GTO, the Lotus single-seaters all unapologetically drawing petrol through more weber carbs than you could shake a bit of blue pipe at, and that’s saying something if you have ever been to the Donegal Rally. 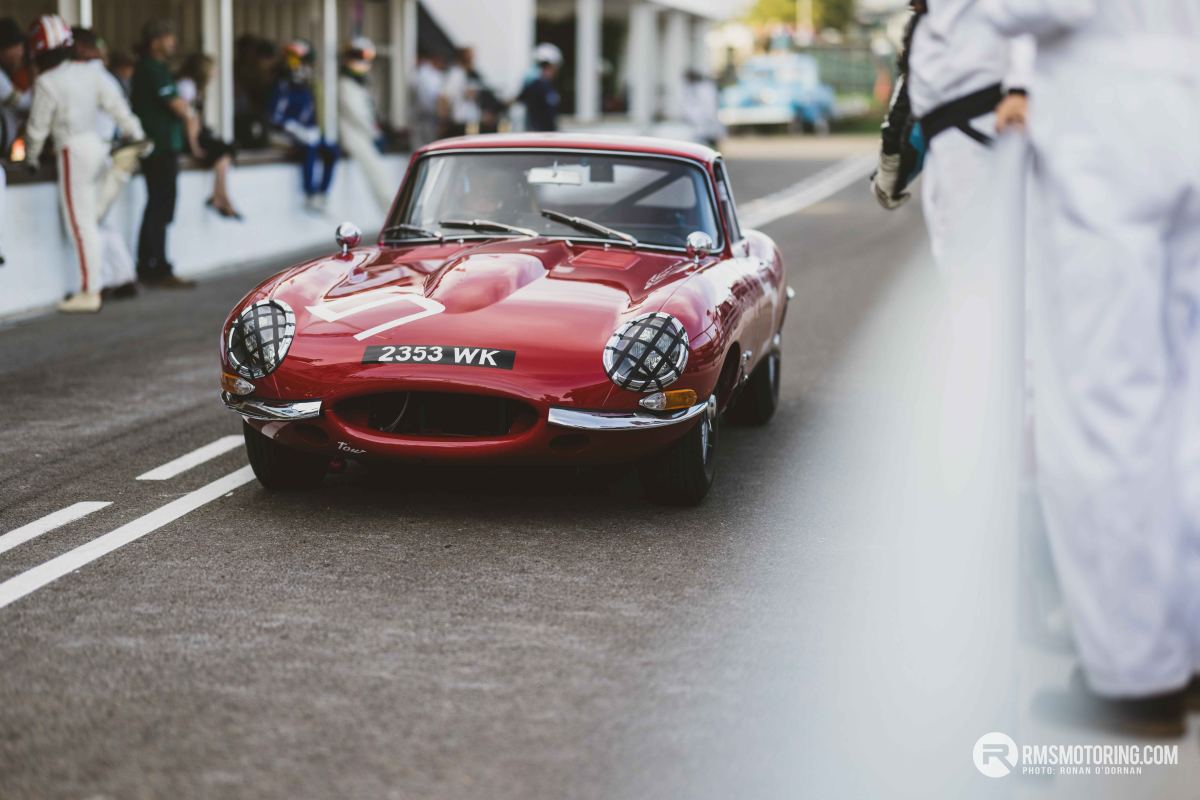 As a photographer, I was in my element. I had previously tried to shoot FOS as an attendee before and found it infuriating. You would find a beautiful angle of a Miura SV on the concourse lawn at Goodwood House but the image would be ruined because the car was surrounded by kids, YouTubers and overzealous tourists taking photos on their iPad. It makes for a really jarring photograph – the focal point and the surroundings at odds with each other.

Revival completely alleviated this issue. The staff, the mechanics, the drivers and the attendees were all dressed in period clothing which all of a sudden made that DB4 GT not look out of place. I was in my element. Armed with a press pass around my arm in the form of a vintage tag, I set to cover the event for the client, (and myself, of course!)
Eyes hanging out of my head at the endless possibilities for interesting photographs, I started in the paddocks, shooting the mechanics, the cars and growing more fascinated every time I pressed the shutter.

This was it. I can only imagine how proud I, as a 22 year old teacher, would have been had I known then that I would end up here one day as a self-employed photographer, well and truly living the dream.

The racing was exciting and intense. It appeared that the drivers in their competitive blindness forgot that they were, in fact, racing wheel to wheel in cars worth in excess of seven figures.  After two days of Revival I left with what felt like a weight lifted off my shoulders – not the weight of clients’ expectations, but the weight of uncertainty over the future of classic car ownership. 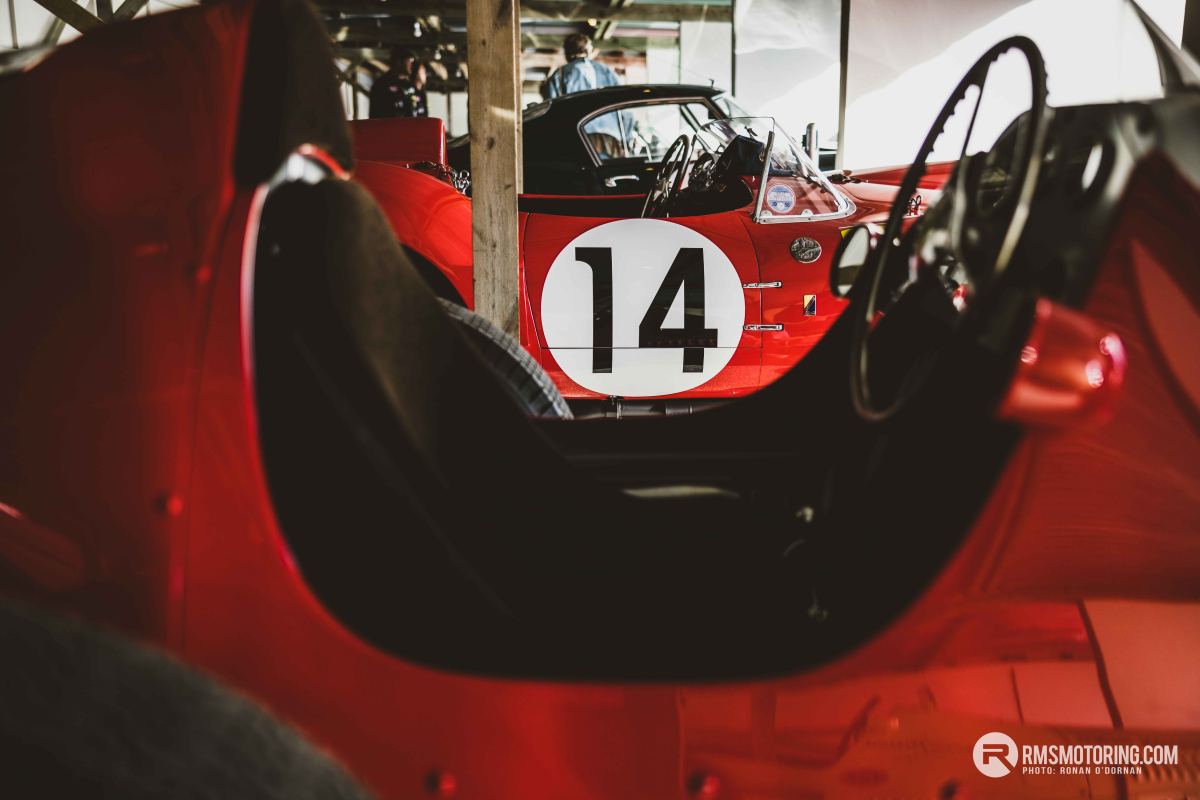 With regards to my own Kadett rebuild, I found myself wondering would I one day have to fit this with an EV drive train to be allowed to keep it on the road? Unbeknownst to me, this uncertainty was always in the back of my head. The real question is, when the younger generation grow up with EVs as the norm, will there still be a place for the rest of us? Revival was the explicitly clear answer to that question.

The classic car world is alive and well. I would advise anyone who is uncertain about it to attend Revival next year. For sure, in the interests of the environment, most of us will eventually succumb to EV daily drivers, but, if I am sure of one thing, it is that the EV future for both modern and classic vehicles will never be able to give me the high that I get from smell of 100 octane fuel being sucked through weber carbs into a combustion chamber and the sound of it being thrust out the other side into a racing exhaust. And you know what?  That’s ok, because there are hundreds of thousands of people that feel the same way. So to conclude, We humans are stubborn creatures, who are quite susceptible to addiction, and the addiction to combustion engined cars is most likely the least harmful of the lot.

Therefore we have nothing to fear! After all, people did not stop riding horses when the bicycle came along, so I think we’ll be just fine. The price of petrol on the other hand…