The Lancaster Insurance Classic Motor Show thankfully returned this year to Birmingham’s expansive National Exhibition Centre. In the same week as the COP26 climate summit and with the Coronavirus pandemic still lurking in the background, an event that celebrates our beloved internal combustion engine in all its many guises over the last century is one to be revered. 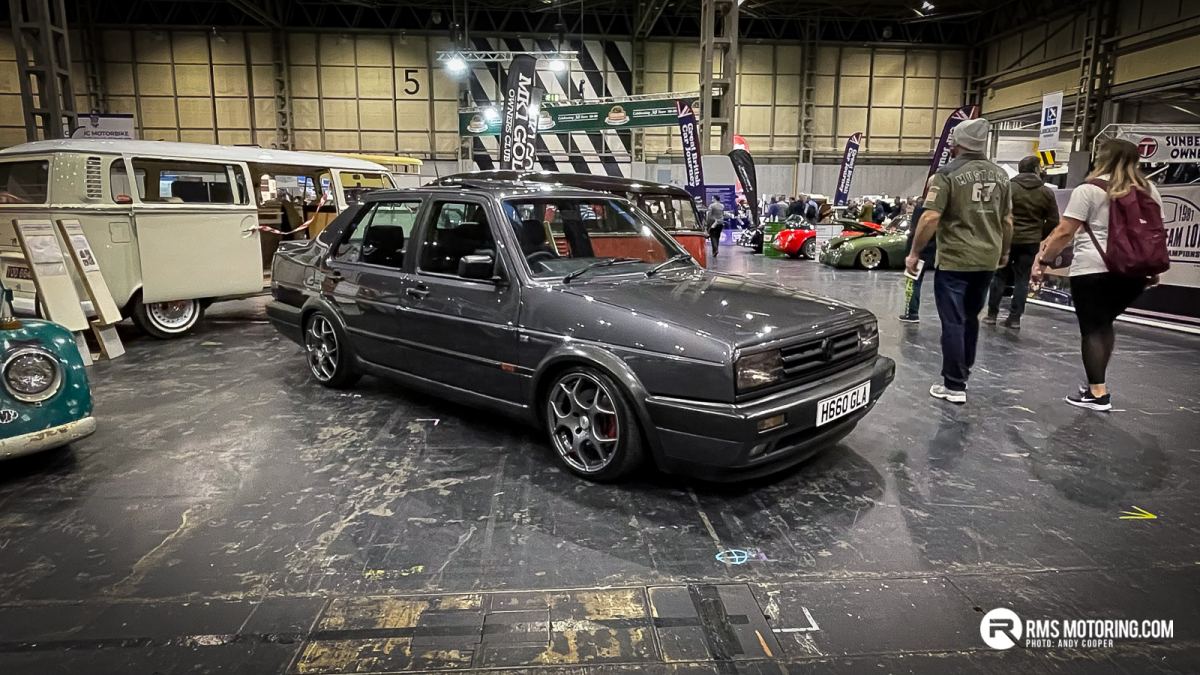 Such a broad church is why the Classic Motor Show is such a beloved entry in the petrolheads calendar, supported by the best owners clubs in the country that bring out their best member’s examples be it an immaculate Miami Blue Peugeot 309 or an original Jetta on TSW Venom wheels. Two days were spent combing the many halls and thousands of cars throughout the NEC. Don’t think a classic show is for you? Remember a Subaru Impreza P1 is over two decades old. The mk4 Toyota Supra is just about to turn 30. It’s not all pre-war Jaguars and first generation Range Rovers, but they’re present and correct too. 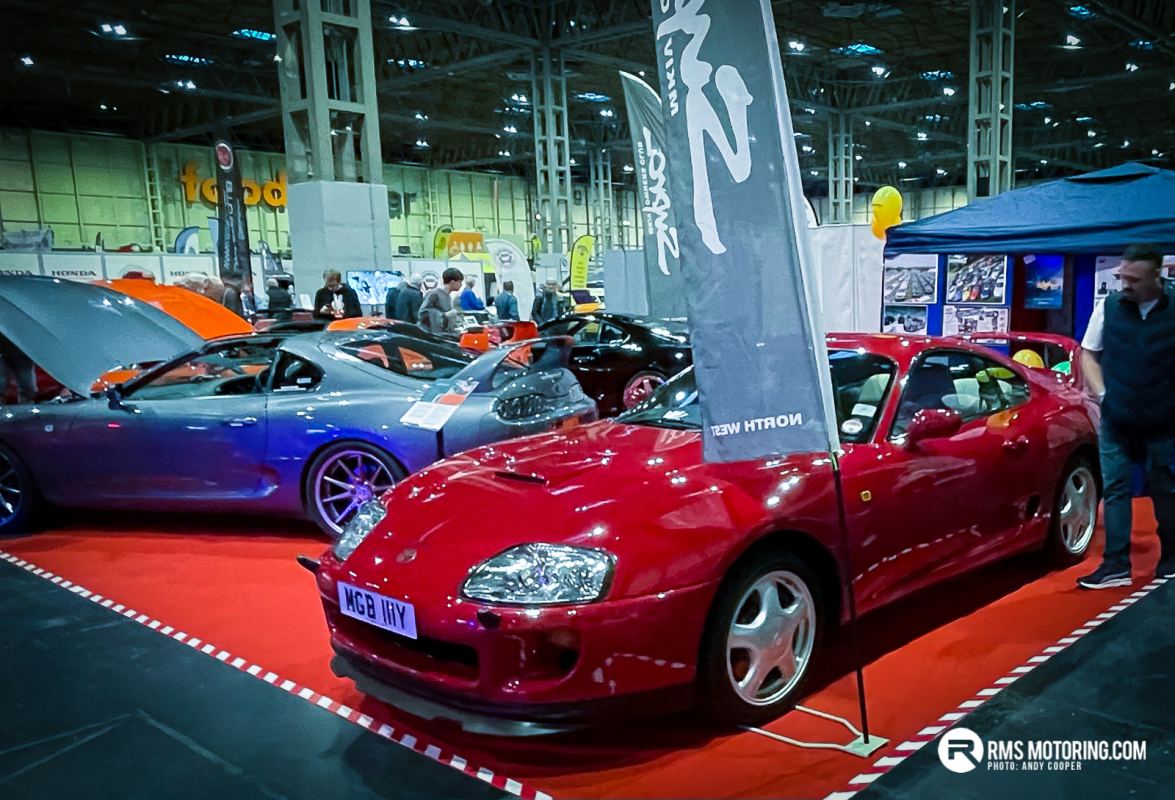 Speaking of which, we spoke to some Supra owners on the MKIV Onwers club stand. This stunning, completely standard twin turbo UK car is now worth well in excess of £70k. The grey targa behind it is highly modified and features a surprising BMW DCT conversion, mating the best of modern gearbox technology to the venerable 90s 2JZ running a large single turbo. Producing 700bhp from its fully rebuilt motor, thanks to Garage Whifbitz is a sight to behold. 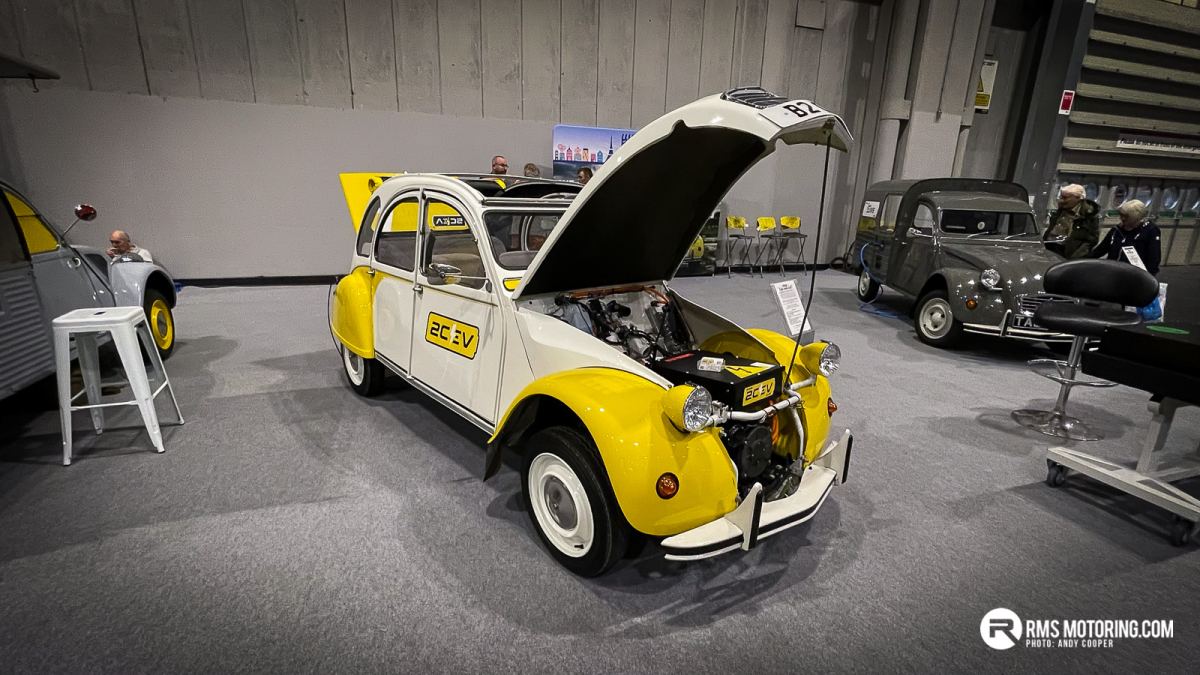 Fans of Jonny Smith’s The Late Brake Show will recognise this, the fully electric, built to order 2CEV as featured on one of his recent shows. Powertrains were on display among the many EV conversion stands at the show, wether it be a French potato mover or an air-cooled era 911. 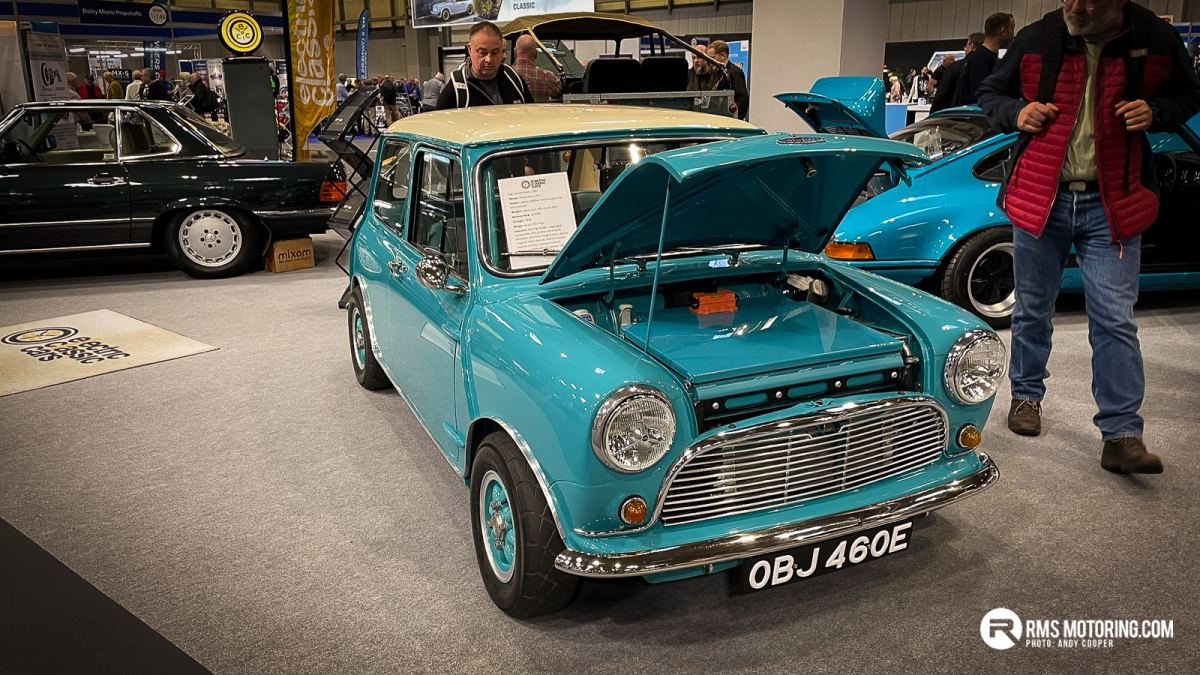 This 1967 Austin Mini is another example of an EV classic. With a Tesla drive unit on board along with a 31kWh battery pack, this mini can now crack the dash to 60 in 5 seconds, no doubt in it’s 300bhp ‘Track Mode’ along with a standard 100bhp mode, where the range is a useful 150 miles. 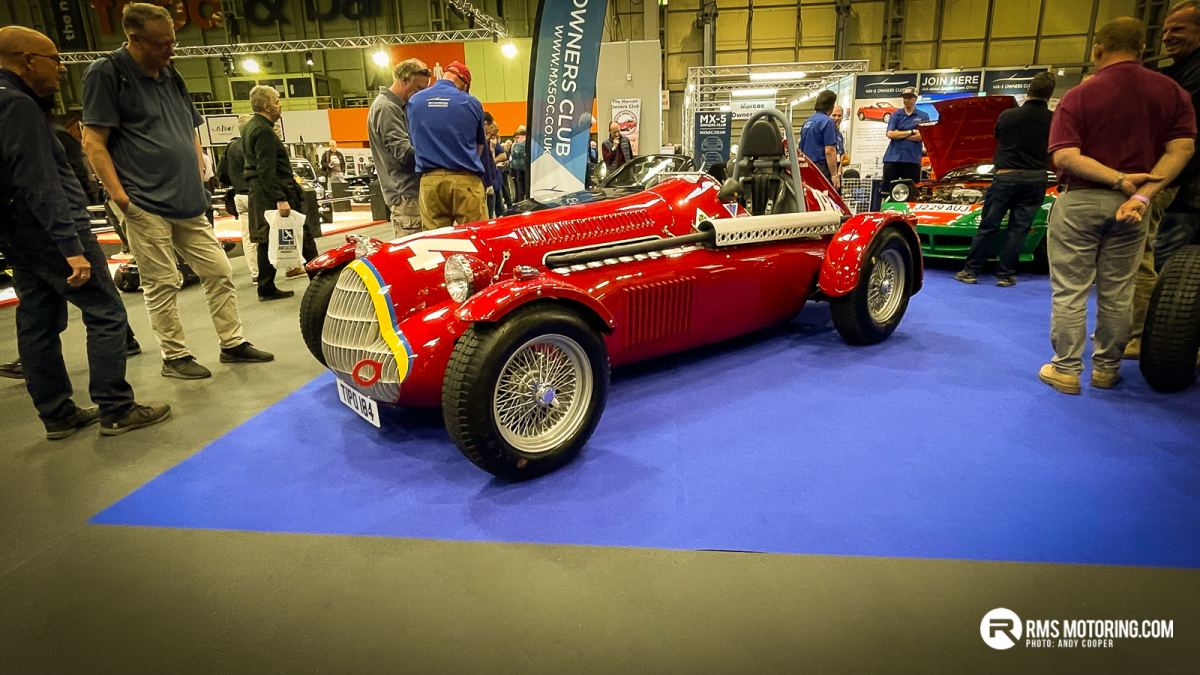 If you fancy a more traditional ICE conversion, what about grabbing a Mazda MX-5 donor car and dropping the powertrain into this, the Tipo 184. TV mechanic Ant Anstead built this particular one on Ant Anstead: Master Mechanic in a collaboration that saw the chassis part built in the UK and then shipped to Huntingdon Beach, LA, where Ant was filming at the time. 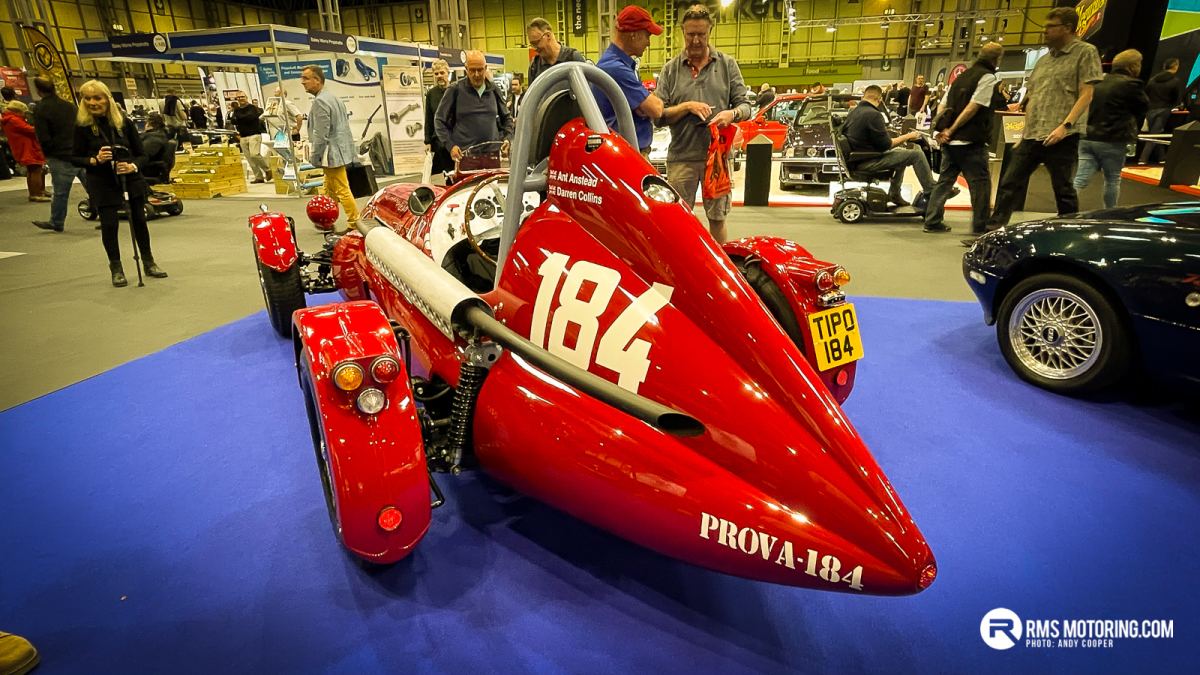 This car divides opinion in terms of what it should be used for, does it raise questions about motorsport heritage, but there is no doubt it looks striking and at well under a ton no doubt great fun to drive. Chris Harris will hopefully feature this on the next season of Top Gear, so we watch with interest.

Of course this was also a product for sale at the show. £10k will get you the chassis, gear linkage and some other basics to get you going, and the fibreglass body. After that, fuel cell, seat and other ancillaries are extras and of course the donor car itself, but it allows you to build the car in stages. 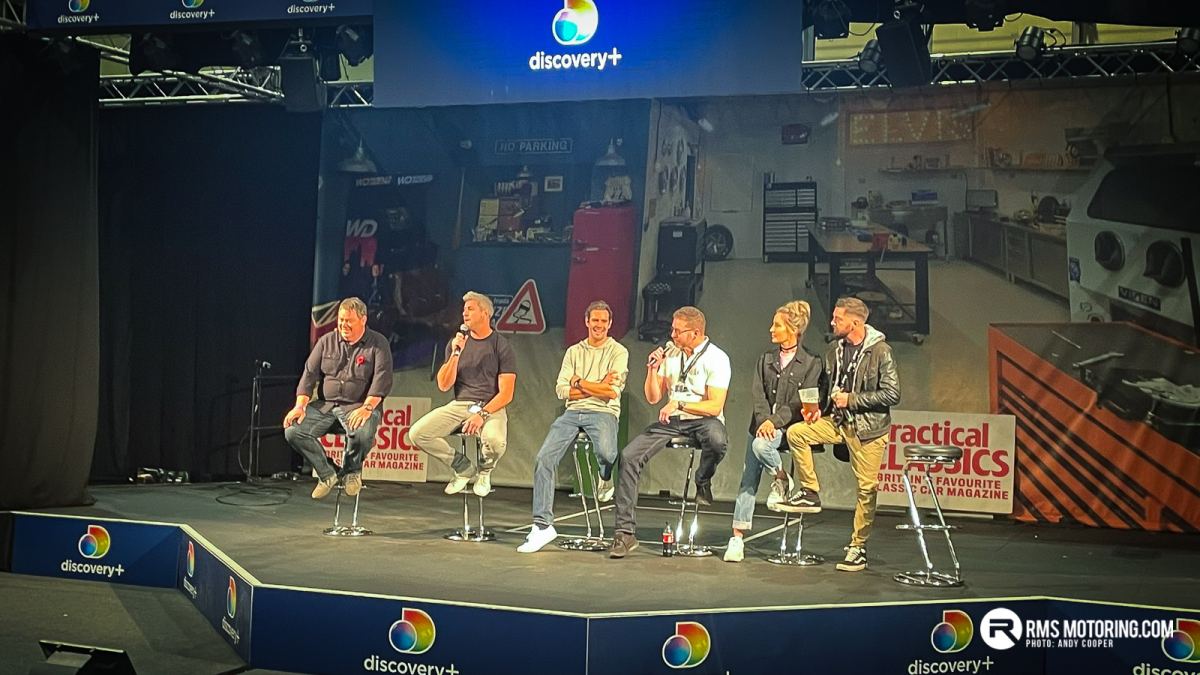 Wheeler Dealer’s Mike Brewer headed up the Discovery+ live stage at the show, joined by costars Ant Anstead and Mike’s new mechanic Marc ‘Elvis’ Priestly. Mike is taking over from Ant on the spanners in the latest series of the show.

Also on stage were other stars of the motor restoration media including Gobin Works Garage’s Jimmy De Ville and Jimmy Doherty from Dream Builds on Wheels. Drew Pritchard and Paul Cowland were also on hand from Salvage Hunters: Classic Cars and everyone was fielding questions from the audience which made for great entertainment.

The stage was also home to the likes of Practical Classics magazine who were restoring a 1971 Austin Marina that hadn’t turned a key, live on the ramps in front of us. Separately, but similarly there was a ‘Restoration Theatre’ where you could watch panel beating and other restoration techniques by experts in the field. 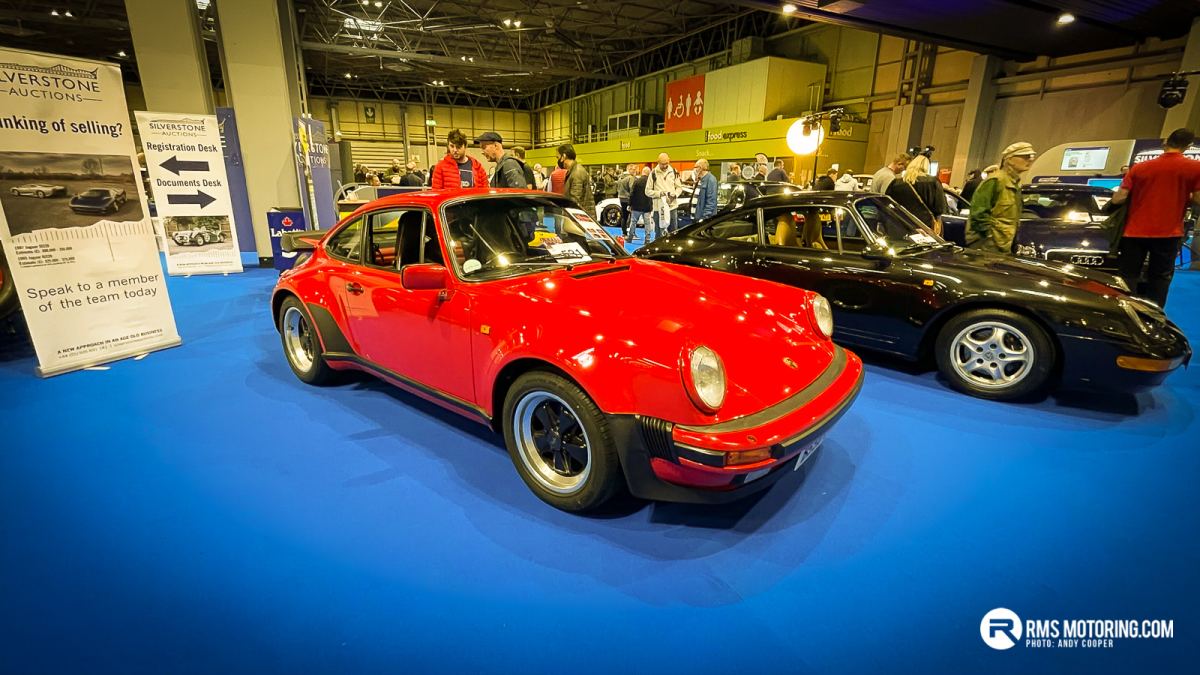 One of the highlights of the Lancaster Insurance Classic Motor Show in the NEC is of course the Silverstone classic auction, that runs live during the show with most of the vehicle lots on sale at their stand for prospective buyers along with dreamers like ourselves to salivate over, to then be stunned by eye watering bids. 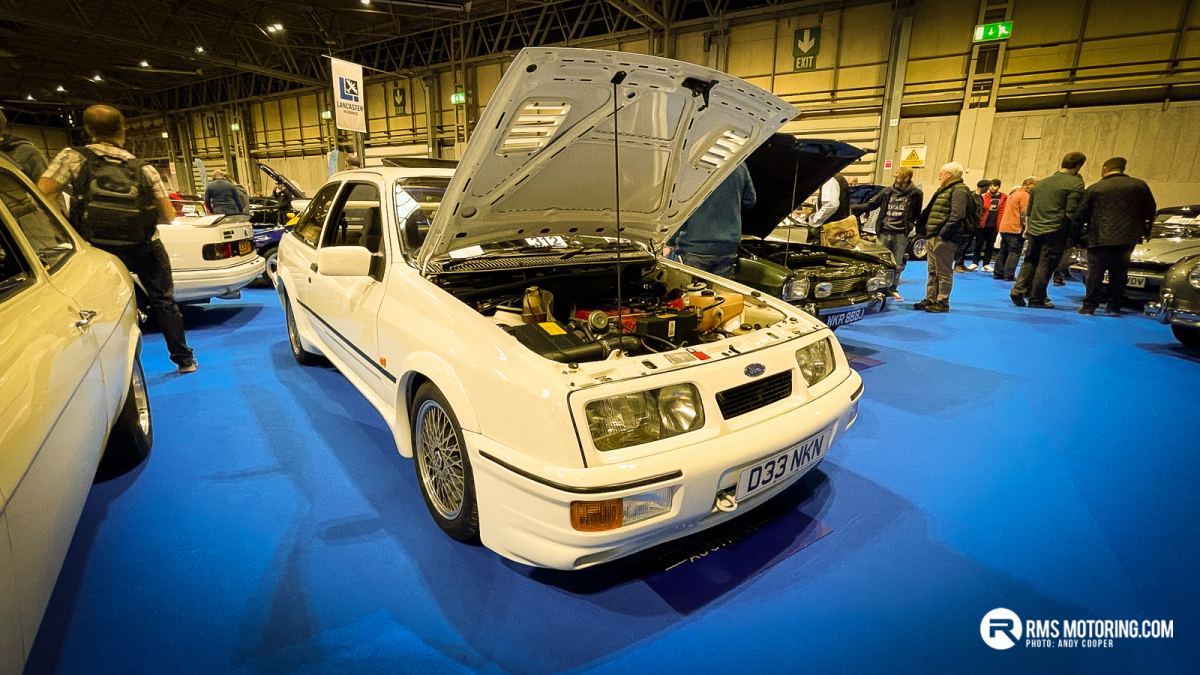 You can view the full auction listing and sell prices here: www.silverstoneauctions.com Back out on the main floors and it’s the outstanding owners club cars that are responsible for most dropped jaws. This incredible Renault 5 Turbo 2 on the Renault Alpine Owners Club Stand is a prime example of a show stopper. An RMS member rides shotgun in a McLaren 570S

Charity Sporting Bears was in attendance with their road experiences.  Depending on the car available you could pay to get 10 spirited minutes whisked off as a passenger around the local Birmingham roads.  With a huge selection of cars on offer from the 80s Bond Aston Vantage to the McLaren 570S there was a lot to choose from, with prices starting from £10. 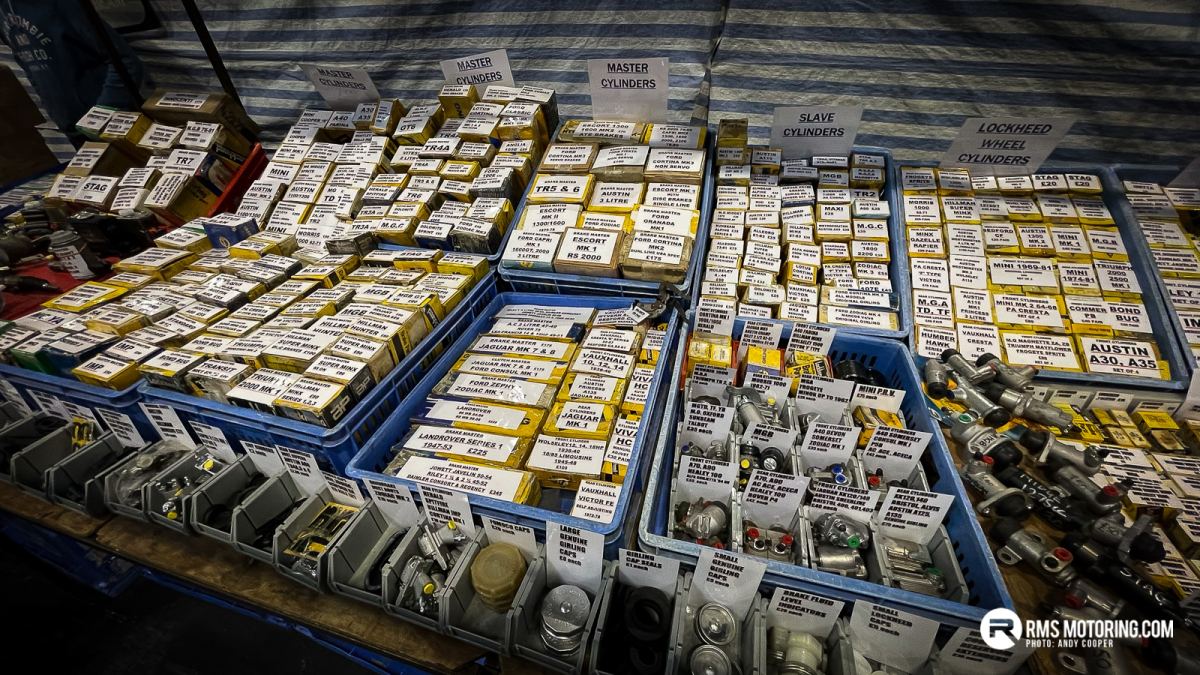 Of course it wouldn’t be a classic car show without a healthy selection of auto jumble. After all, the NEC has two million square feet of floor space to fill, so if your Ford Cortina Mk2 needs an original Girling slave cylinder, you’re in the right place.

You could end up going home with even more tenuous purchases. A Chesterfield sofa perhaps. Garden Furniture? The Classic Motor Show has more than you could ever hope to want from a motoring event that’s hidden from the elements. It’s also exceptionally easy to travel to from Northern Ireland.

We flew EasyJet from Belfast International Airport to Birmingham; the NEC itself is connected directly to the airport by a short ride on the monorail that also links to the train station. Getting to accommodation in the city is also incredibly simple as Birmingham New Street Station is only one stop (about 15 minutes) away.

Tempted? Take a look on the show website at www.necclassicmotorshow.com and save the date.

pablo replied at 16:36, Wed 19 May, 2021
Report
Was great the last time we went, such a selection of metal! And not all rusty fords.
Cooper replied at 09:41, Wed 26 May, 2021
Report
£2 discount on classic car show. Use discount code RMS https://classicmotorshow.seetickets.com/timeslot/classic-motor-show :grinning:
Cooper replied at 11:22, Tue 19 Oct, 2021
Report
NEC CLASSIC SHOWCASES ELECTRIC CLASSICS IN MOTION ‘Our Friends Electric’ showcases classic electric vehicles with a brand new driving feature within Hall 5. The models in motion include a 1912 Baker Electric, converted classics and ‘restomod’ vehicles. Lancaster Insurance Classic Motor Show, with Discovery, held 12-14 Nov 21 Tickets on sale via advanced online booking This year’s Lancaster Insurance Classic Motor Show, with Discovery, is embracing the future with a brand new feature showcasing not only the look of classic electric cars but also how they drive. 339323 Twice-daily, a range of electric classics will be driving around a purpose built oval within Hall 5, next to the Discovery Live Stage, with Wheeler Dealers’ Mike Brewer talking to the various companies and owners. Show Director Lee Masters said: “Electric cars may seem like they’re fast becoming part of our future but what most people don’t realise is that they’ve been part of our motoring heritage for over 100 years.” 339324 This includes the 1912 Baker Electric, on loan from Mr Andrew Wood. Manufactured in Ohio from 1899 to 1914, the first Baker vehicle was a two seater with a selling price of $850 and boasted Thomas Edison as one of its first buyers. Edison also designed the nickel-iron batteries used in some Baker Electrics. Unlike other early cars, the Baker Electric needed no cranking, had no gasoline smell and was essentially maintenance-free. Not surprisingly, it was marketed to women. In late 1910, the Baker Electric was quite luxurious and priced at $2,800. It had a seating capacity of four passengers. These days, owners include Jay Leno in the USA and there are only three Baker Electrics on the UK’s DVLA database including this example, of the 85 historic vehicles powered by electricity. Amongst the other electric cars that will be driving will be the Porsche 356 inspired Electric Chesil E, the Westfield Eleven, an electric replica of the iconic Lotus Eleven produced in the 1950’s to race at Le mans, and the Westfield Sports. The RBW Electric Roadster ‘restomod’ will also feature. The roadster is a brand new electric car with a MGB heritage bodyshell that has been slightly modified. Whilst the car has all the styling of a classic car, it drives like a modern sports car. These will be joined by converted classic cars from Electric Classic Cars, the subject of Discovery Channel’s Vintage Voltage. Founder Richard Morgan has converted a whole range of cars from a Mini and a Land Rover to a Ferrari and BMW 2002. Masters added: “With some classics being converted and other ‘restomods’ coming to market, we wanted to highlight the options available to enthusiasts who are interested in electric motoring but still want that classic styling. It’s a perfect fit for our show theme of The Journey Continues…” The Lancaster Insurance Classic Motor Show, with Discovery, will be held at Birmingham’s NEC from Friday 12 to Sunday 14 November 2021. Tickets are on sale. Check the website www.necclassicmotorshow.com or sign up for the newsletter for the latest updates at www.necclassicmotorshow.com/newsletter. 339325339326339327339328
dh1079 replied at 11:54, Tue 19 Oct, 2021
Report
@RobsWRX
Gaz replied at 13:43, Tue 19 Oct, 2021
Report
Can't wait for it (y) Silverstone auction listing looking brilliant, looking round these is always a highlight of the show - Silverstone Auctions | The NEC Classic Motor Show Sale 2021 339334 339335 339336 339337 339338 339339 339340 339341 339343 339345 339346 339347 339348 339349 339350 339351 339352 339353 339354 339355
da.murf replied at 14:30, Tue 19 Oct, 2021
Report
if you where to fly Belfast to Birmingham, would it be Covid double jab card etc or more proof needed?
pablo replied at 14:31, Tue 19 Oct, 2021
Report
you dont need anything for the flight, entrance to the halls maybe
da.murf replied at 14:31, Tue 19 Oct, 2021
Report
| you dont need anything for the flight, entrance to the halls maybe
happy days, even for return etc?
pablo replied at 15:00, Tue 19 Oct, 2021
Report
travelling to mainland requires nothing covid wise, not even a test mask on the plane just
Gaz replied at 15:44, Tue 19 Oct, 2021
Report
The Classic show do have an advisory on their website though saying that you'll need the cert for NEC Entry. The link for NI just takes you to our NIDirect Covid page. 339362

Read More on the Forum: Show all 21 comments