You are at:Home»Car Show»Xtreme Power at Fairyhouse Race Course
By Andy Cooper on August 30, 2003
Tweet

Returning for a second year running this time with a new venue, Xtreme Power was to be held at Fairyhouse Racecourse in Raotath (Co Meath, just north of Dublin). With the reputation of last year’s excellent show, along with the amazing lineup of Terry Grant, Steer from the Rear and Fire Force two, not to mention performances lined up from our own site members Mark (sidewaysbuff) Luney in his M5 and Davy Hollinger (the_boffin) in his supercharged corolla, we’d be stupid not to go!

The night before the show, I was wearing a foot-wide grin as I picked up <em>the</em> widearch F2 Saxo VTS to drive down (thanks to Mr Luney). When I met up with the convoy at Halfords in Belfast there were some strange looks when they saw I was driving! Robert (RMS CRX) arrived with me to meet Davy in his corolla and Mark and Peter from JK Autospares, in wide arch corsa and prelude respectively. By the time we left it was getting past 10am and we all tore up the M1 in true style.

A brief stop off at McDonalds in Sprucefield meant rapid breakfast deployment for some, whilst I had a brief chat with Baz who was also waiting there for the jon44w convoy. We passed a helicopter which was hovering 20 feet off the ground at the Newry bypass before heading to a small petrol station off the beaten track across the border, for that all important cheap juice. And then it was a straight run down to Raotath, with the sun beating down on us. Jacqui made full use of the roof handles as I dropped down the highly agile saxo for any roundabout opportunity.

On arrival I was greeted by Junior from <a href=”//www.cruiseirl.com” target=”_blank”>CruiseIRL</a> who had set aside a huge space for the stand beside the main entrance of the Fairyhouse Racecourse. Not long after we were through the door, Mark (buff) arrived with his convoy and we all parked up. The sizeable RMS stand consisted of:

Davy headed round to the pit area beside the track to join Steer from the Rear and Terry Grant to prepare for the live arena action and we set about cleaning the cars.

Like last year, there were rows upon rows of modified cars from all over the country. Calder Coachworks had brought their stunning yellow MR2, Flush Bus had their eyecatching pink Civic along and I drooled over a supercharged Corolla. ChrisNoMates was showing off his latest modification to his Veilside MR2, namely Diablo doors, which really has finished his car off in my opinion. Fusion were out in force with Colin Greer running a soundoff, but the noise of grunting engines from the arena was hard to ignore…

Terry Grant was out in usual style with the <em>Legend</em> with his almost faultless (we’ll come to that later) routine involving him locking the throttle open on the car whilst it was diffing, climbing on the roof etc etc. At one point however, as Graham and I were standing at the side of the track, it just started to circle closer and closer to us before it was subtley ‘killed’ by the remote switch (in the shape of a gun!) The TVR was also out getting its usual share of tyre wear.

Steer from the Rear were one car down. Were, being the operative word, as they had brought along a temporary replacement for one of the Nissan 300zxs, namely a Mitsibushi Lancer Evo 4! Not exactly Steer from the Rear, but Paul made sure that it did the circles, smoke bailing from the tyres in pure style. The 300s were on form as well; exhaust flamer kits setting fire to the bumpers as per, and there were several dousing sessions in the pits!

It was then the turn of the website members to show them how its done, and Makaveli from <em>CruiseIrl</em> was out on form in his silver over grey Corolla, along with Davy in his yellow widearch beast. Graham and I became human traffic cones for them to donut round as the crowd cheered. Damo from Opposite Lock took charge of a GSi Carlton and proved that he could steer more than a twincam corolla. Our own SidewaysBuff stole the show with a "full style" performance in his E34 BMW M5. The Guardai hovered ominously overhead in a helicopter to watch the proceedings.

A quite crazy jet engined machine called "Fire Force 2" also appeared in the live action arena. This thing could only be described as a jet engine with wheels, and as the turbine spooled up it shook the windows of the Fairyhouse complex and left the crowd deaf!

It was great to be part of another good show and it built upon its debut last year. Hopefully Xtreme Promotions will run as an annual event for years to come, and I hope that RMS is invited!

Thanks to:
– Richie Lavin (Xtreme Promotions)
– Junior at CruiseIrl/Xtreme
– Peter and Mark from JK Autospares
– Mark Luney for bringing three of his cars (and lending me the saxo!)
– Alan McBride
– Robert (RMS CRX)
– Campbell
– Davy Hollinger 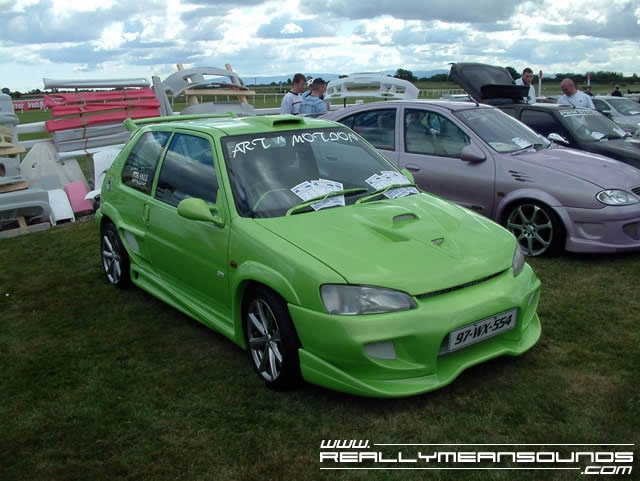