With the launch of our new Electric Vehicle Forum section I thought it was high time RMS provided a roundup of the current state of the Electric Vehicle (EV) market in NI with a peek at the used market and a vague comment on the local charging infrastructure, or you guessed it, lack of.  If you are considering purchasing an EV in the near future, hopefully the below will be of some benefit, or at least mild entertainment.

First on our list and with good reason, Elon Musk’s brand hasn’t made its way to Northern Ireland in the form of a dealership.  Your closest options are either the recently opened Tesla Sandyford dealership in Dublin, or Tesla Glasgow.  Don’t hold out much hope in the second hand market either, with Used Cars NI listing only two Tesla (not Teslas, lets get it right folks) for sale at time of publication. Not only are they scarce over here and clearly not a cheap proposition, but we’ve also been left lacking in charging infrastructure from Tesla themselves.

This supercharger map from the Tesla website, showing one planned for the Lisburn area, with the only remotely close in existence at the M1 Applegreen near Dundalk.

This isn’t to say it is impossible to live with a Tesla in NI.  Far from it, but both acquisition and running the car over long distances certainly requires more thought and perseverance.   Take the fast charger at Applegreen.  It’s 120kW supply can give you 50% range… possibly 125ish miles in 20 minutes.  Take yourself to the charging point at Sprucefield outside Lisburn, and you’ll receive a heady 50kW if you’re lucky.  Expect to spend that bit longer in M&S.  NI is of course a ‘wee’ country and we would expect most owners to charge at home overnight, and range becomes less of an issue.

Without a Tesla main dealer in Northern Ireland, servicing again is Dublin or Glasgow.  Thankfully service intervals on the new Model 3 are a generous 25,000 miles or two years, whichever first.  At least when you do have to make that trip south you can make use of the fabled Dundalk supercharger, if you felt so inclined.  Although there is strong demand for the new Model 3, Tesla is managing to ship them so lead times aren’t unreasonable.

*Stats provided as a guide only, there can be huge variation in range depending on temperatures, driving conditions etc

No such issues in the Carlos Ghosn camp (heh!) with an incredible three Zoes for sale on the used market, and an autumnal avalanche of leaves (Leafs?  Make like a tree McFly).  Thirty-six Nissan EVs listed on Used Cars NI.  All of these available from your favourite boucher road or other main dealer with on site stock and sensible lead times.

Both models have increased battery capacity and therefore performance and range, and Nissan have managed in what I can imagine was not a difficult task to improve it’s looks in this latest generation.   The Leaf E+ packs a [relatively] punchy 215bhp with its 62kWh battery comfortably clearing the 200 mile range mark.

The decidedly cuter and smaller boned Renault Zoe evokes a bit more Nicole and Papa and it’s latest generation includes a 44kWh 160 mile range electric drivetrain.  Just enough to get to the port and back again.  From somewhere. Munich’s strange little hatchback continues to sell well in the local market with its suicide doors and brand credentials.  If you’re the sort of person who’s excited by the thought of a 2 series active tourer, look no further.   Beauty and the beer holder, and all that. There are a few of these knocking about the AutoTrader and classifieds, but bear in mind these have had more generational changes than a Spiderman film so all is most certainly not equal.  Early all electric cars had a real world range of under 80 miles, some had range extenders, and the very latest cars at the other end of the spectrum claim over 180 miles to a charge, so don’t be entirely blinded by their beauty.

Hyundai continues its secret infiltration of the ‘car I might actually buy’ market with it’s ordinary-but-actually-quite-good all electric variants of their Kona and Ionic.  The Ionic caused a bit of a storm recently on the forum after a sensibly priced Ionic lease deal appeared online and some were snapped up by RMS members.  Golf-Rs in a bucket.

The Kona is actually a well equipped, smartly styled SUV.  A respectable 250 mile plus electric range with a shade under 8 seconds to despatch the 60mph dash from its 64kWh motor. 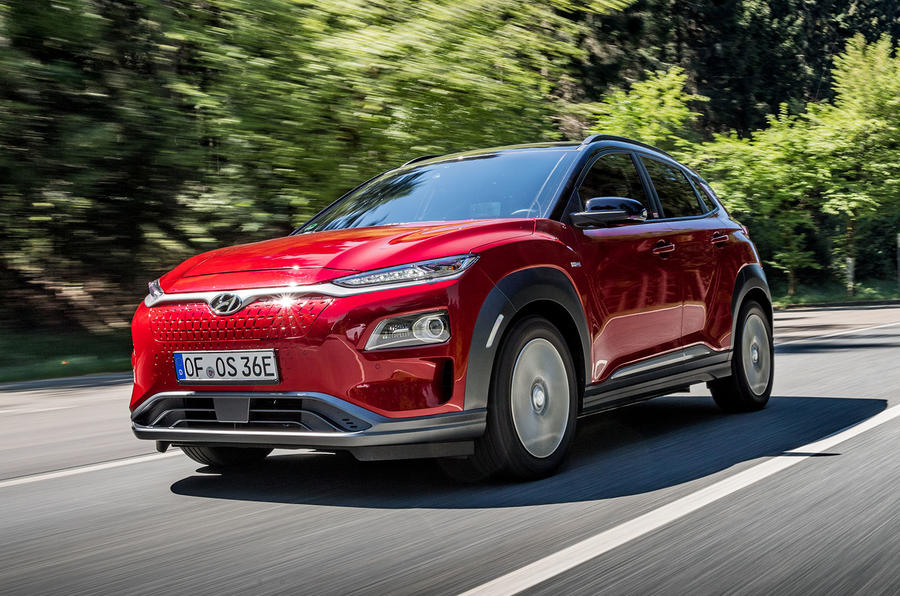 German Plates – for that “Premium” look

The aforementioned Ionic lease unfortunately included a motor that if it breathed like all good ICEs, we would term asthmatic.  I mention this as the instant torque of an EV is lauded as one of the great driver attractions, but it feels Hyundai are holding back the go in the name of range, which in the latest and top of the range cars still isn’t far north of 160 miles.

It does have a fairly decent interior, top of the range models having a leather shod dash and toting a relatively low button count (Model 3 excepted) and displays matching up to the best the Germans can offer.

Three stunning I-Pace.  iPaces.  IPi?  I give up.  Three electric Jag SUVs currently adorn the local classifieds, with new stock available at our two main dealers in the province.   Subjectively the best looking all electric car on the market today, even with that steep C pillar bull nose back end.

The i-Pace manages to conjure up desire where other EVs, including the Tesla leave you feeling flaccid.  The others are Currys white goods in comparison to the surprising  package that has come out of Solihull.  It feels as special inside too, with an evolution of the best the X-range cars had to offer on show.

Prospective Northern Ireland owners also won’t befall the i-Pace’s biggest criticism, it’s thirst for power.  It’s 90kWh battery is up there in capacity terms with Tesla, but Tesla has an extensive high speed charging infrastructure that JLR sorely lacks.  Where else is lacking in high speed chargers?  You guessed it.  Its a level playing field over here.

This is a question for our new Electric Car section on the forum.   One of the most notable, high profile electric vehicle launches in 2019 of course has been the Porsche Taycan, but as they have yet to grace our roads it seems unfair to include them.  Also as a 6 figure purchase price it is well out of the daily driver most wanted list for most.

PHEVs, or hybrids that are appearing in most model ranges don’t pose the same range or charging questions, and in many cases are too much of a compromise too, so in a swipe of the pen I have discounted those as well.  Again one for the forum – see you there.