Jbridges522 said:
Bronze for me, think for wheels with flat faces its to much but ur wheels are pretty skinny, and sure would be something a bit different and make you think u've got something new when they get back haha.
Click to expand...

Good point, I think I’m gonna do it.

Do it! Bronze will look great.

Saw one of these the other day and made me think did you go for the bronze?

Jbridges522 said:
Saw one of these the other day and made me think did you go for the bronze?
Click to expand...

I did it. And I think they look great! It gives it a sort of John Player look.

2 of the wheels ended up needing straightened. I also replaced the ball joints and inner tie rods in the hope that one would fix the slight steering wobble I get at around 70mph.
Unfortunately it’s still there. So the next plan is changing the drive shafts which isn’t cheap, and it’s looking like new passenger side drive shafts are no longer available!

Though I’m still taking it on its first track day of 2021 this Sunday! Can’t wait. Anyone else going to Kirkistown on Sunday? Get it all stickered up!

Just realised I haven’t updated this since April. Theres a been a few things done to the car since then. And I've attended 5 track days in the car and its been a blast.

The biggest change has been the wheels. I wanted track day tyres and I was struggling to find the right size in the 16 inch wheels. Reading up on the Clio Sport forum, everyone suggested switching to 15 inch as not only are there plenty of tyre options, but the car drives and handles better with the smaller wheels. I ended up selling the refurbished Team Dynamics and buying a new set of Gold Speedline Turinis. With a set of Toyo R888's, the car drives far better. Especially on track.

All the wobbles have now gone but the steering has never felt 100%. Its not all the time, but its never felt 100% when turning right. The car sort of pulls you in more than expected and you never know how much steering input to use when steering right? Chasing the problem has led me to track rods, ball joints, steering rack poly-bushes and even new driveshafts. Every time I change something it feels great but then after a short while, the problem comes back.
Before I drove it to Mondello I also had the wheels aligned at Ivan Kerrs which helped a lot. The car definitely drives better but its still not 100%. And then on the way down to Mondello it was raining heavily and the steering felt even more sketchy as usual when turning right again. Though when it dried up, it felt fine again. Also theres now a knock when dry steering which is definitely new. After plenty of forum searching and asking for help, I'm now convinced its the top mounts. Apparently the bearings go in them which can effect the steering and would also explain the knock. So I now have a set of top mounts on the way so after they're fitted, the car should be perfect!

Believe it or not, after all the time, effort and money spent on it, I'm gonna sell it. I never planned to sell it, but I've decided to buy my old mk5 GTI back. Its a car I've always regretted selling, and after seeing my old car come up on Gumtree, I had to have it back. The Golf is gonna take over the track day duties along with a GR Yaris which is coming in May/June. So I need to sell the Clio to make room.

Before I sell the car, I'm obviously going to get the top mounts swapped so its driving 100%. I'm also thinking about removing all the track focused interior and putting it back to stock as much as I can. The theory is, I'll get more for the car if its stock and I'll get good money for the seats, steering wheel etc if I sell them individually. 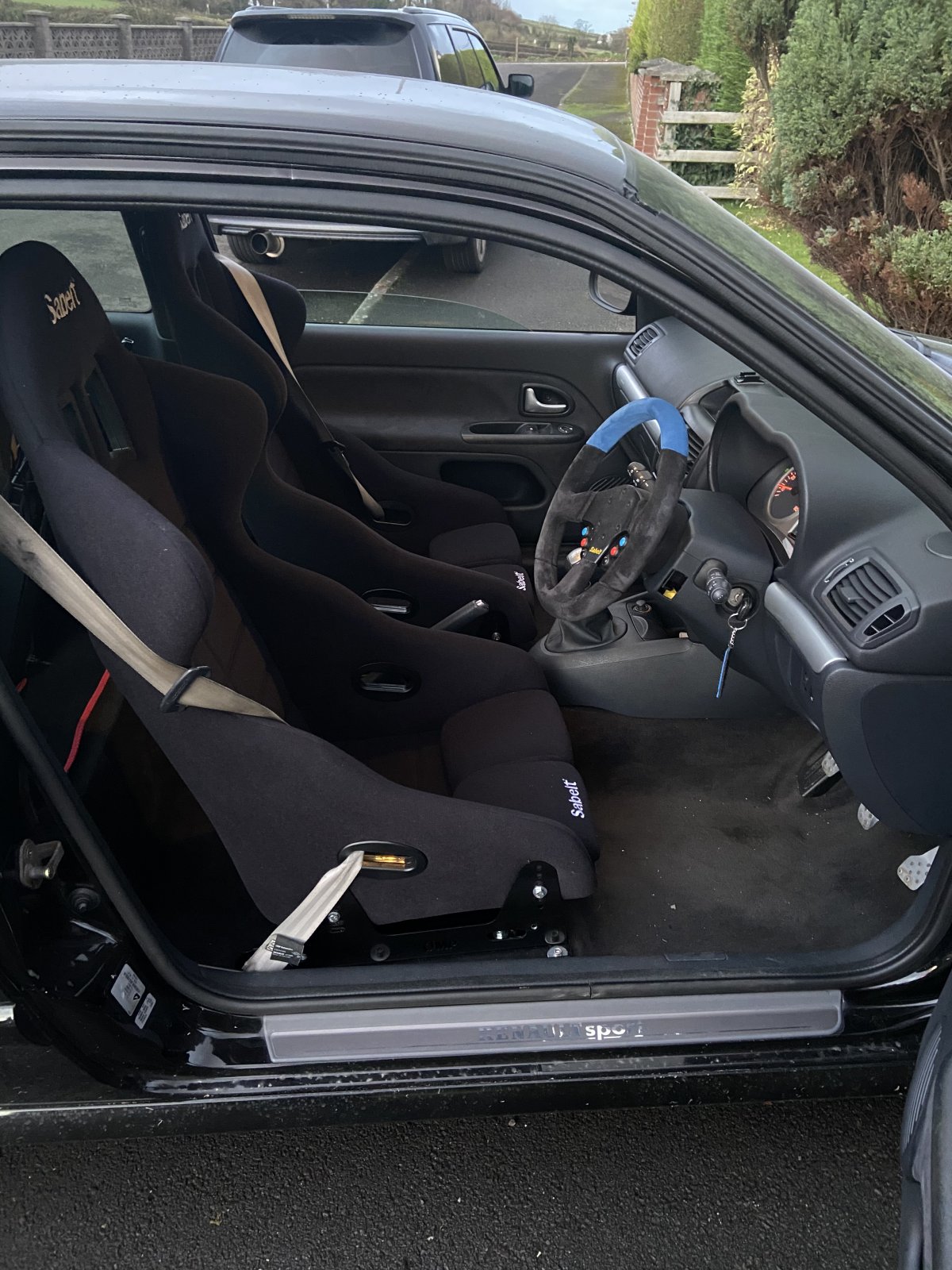 That’s the car ready for sale. If anyone has any questions then feel free to PM me.

That’s the Clio sold. I think we’ll be seeing at Kirkistown regularly still as the buyer plans on using it as a track day car.

Someone got a ready to go car

Just out of interest @Chris tii , how much did this go for? Was hoping to glimpse the ad but it's obviously away now with it being sold.
I'm toying with the idea of a 182 for next year for a bit of track fun, this looks the ticket!
You must log in or register to reply here.
Share:
Facebook Twitter Reddit Pinterest Tumblr WhatsApp Email Share Link
Top