See the blog feature on this - Andrew Nesbitt, the six-time Donegal International Rally winner, will be in the Parade of Power when the crews leave Jackson's Hotel at 10.00am on Saturday, 31 August on the 120 mile trip of nostalgia over many of the famous Donegal stages. Read the Full Article Here 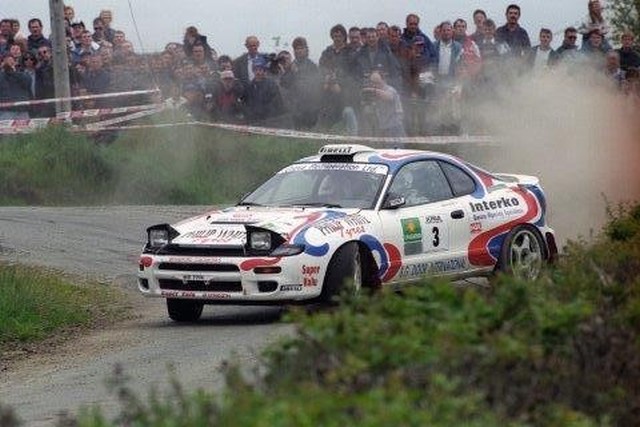 Eugene Donnelly, three time winner of the Donegal International Rally, is the latest of an impressive list of former winners who will be in Donegal at the end of August for Déjà Vu Donegal, the rally reunion party that is surpassing all expectations.

“We knew the response in Donegal would be massive but we had no conception of how big. With three months still to go we already received 135 entries giving us no option but to start a reserve list when we reach the 150 mark. And it is not just the numbers, the quality is outstanding. Seven former winners have now signed up and five more have indicated their intention to join us.

Eugene will be accompanied by Paul Kiely on Déjà Vu Donegal, when he won the rally in a Toyota Corolla WRC in 2004 and 2005, but it was Paddy Toner who was alongside ‘The Genie’ in 2008 in a Skoda Fabia WEC when the county Derry driver got his third Donegal win.

The Donnelly/Derek McGeehan engineering partnership succeeded where others had failed in adapting a Toyota Corolla to Irish tarmac, and to the surprise of many in 2004 the Corolla led the rally from the start. But by stage four Nesbitt’s Subaru had moved ahead, then a stage blocking incident on day two enabled the Toyota to slip back into the lead and Eugene and Paul Kiely took their first Donegal win and went on to become the 2004 Irish Tarmac Rally Champions.

The Donnelly/McGeehan combo was again at work in 2008, this time on a Skoda Fabia WRC. Sadly the rally was curtailed on the second day when an errant spectator strayed onto the road and was fatally injured. Eugene and Paddy Toner received the Jim Kennedy Trophy but there were no celebrations.

Déjå Vu Donegal is supported by The Donegal Motor Club, the Ballybofey and Stranorlar Chamber of Commerce, Bord Failté, Tourism Donegal, Jackson’s Hotel and the Ramelton Festival Committee. All profits will be donated to the Donegal Hospice.

Has the actual route been communicated yet? Although Patrick never rallied in Donegal he turned many heads and hearts on his five appearances at the Lurgan Park Rally and his one outing on the Toshiba Rally in the Antrim forests.

The debonair Belgium has recorded an astonishing 104 wins in his long rallying career including a runner up spot in the World Rally Championship Rallye Sanremo in 1993. He first got the attention of the Irish fans in 1988 when he won the Manx International, a counting round of the Irish Tarmac Championship, driving his distinctive BMW M3 in its Bastos/Castrol livery and incidentally on Northern Ireland plates.

“Patrick became a resident in Lurgan Park between 1995 and ’99 showing us just what a professional he was as he adapted to that highly specialist event and won it on his third attempt in 1998.” remembers Plum Tyndall who recorded all the Belgium’s drives for RPM Motorsport

He won in ’98 but it was his battle with Gwyndaff Evans the previous year that gave the Park pundits a day that they are unlikely to forget. Both were in almost identical WRC Escort Cosworths, with Gwyndaff’s having a slight edge, as it was a works entry.

The Welsh driver led by 3 seconds after the first 3 stages but a half spin on stage 6 left the two professionals on equal terms going into the last stage. At the end of the test they had both recorded a time of 1m.51.7s. with Gwyndaff getting the result on count back having recorded more fastest stage time during the afternoon.

As always Willie McKee, who organised the sponsorship that helped to bring Patrick to Ireland, was by his side in the same car that had brought them so close to winning the year before,when they finally sipped the champagne.

Patrick will be joined by a host of former Donegal winners and the ‘First Lady’ of Irish Motorsport, Rosemary Smith. Rosemary, who drove a F1 Renault on her 80th. birthday, will be in a Sunbeam Tiger in ‘The Hills’, one of two of the classic 1960s V8 engine sportscars in the event.

cormac81 said:
Has the actual route been communicated yet?
Click to expand...

I would guess this is only given to entrants. Worth contacting Plum to ask. ([email protected])

Cooper said:
I would guess this is only given to entrants. Worth contacting Plum to ask. ([email protected])
Click to expand...

Cheers would be nice to see this on move. When Vincent Bonner and Seamus McGettigan broadsided their Group 4 Escort through the streets of Letterkenny on the last stage of the 1983 rally the crowds could not contain themselves with joy as they cheered the first Donegal pair to win their own International.

That victory triggered the greatest celebrations in the event’s history which started in Letterkenny and ended during the following week with a cavalcade through Vincent’s home town of Dungloe.

Vincent had shown form in Group N but in 1983 he hit the jackpot. Austin MacHale, (Vauxhall Chevette) and Bertie Fisher (Opel Manta) had led the rally but following Bertie’s crash it looked as if the Dubliner was about to get his first Donegal win.

He started the penultimate test with a nine second advantage but arrived at the end of Atlantic Drive having incurred three punctures to Vincent and Seamus’s amazement.

Entry enquiries are now being put on a reserve list, but places at the Gala Dinner on Saturday night are still available online at: www.rpm-motorsport.com/tours