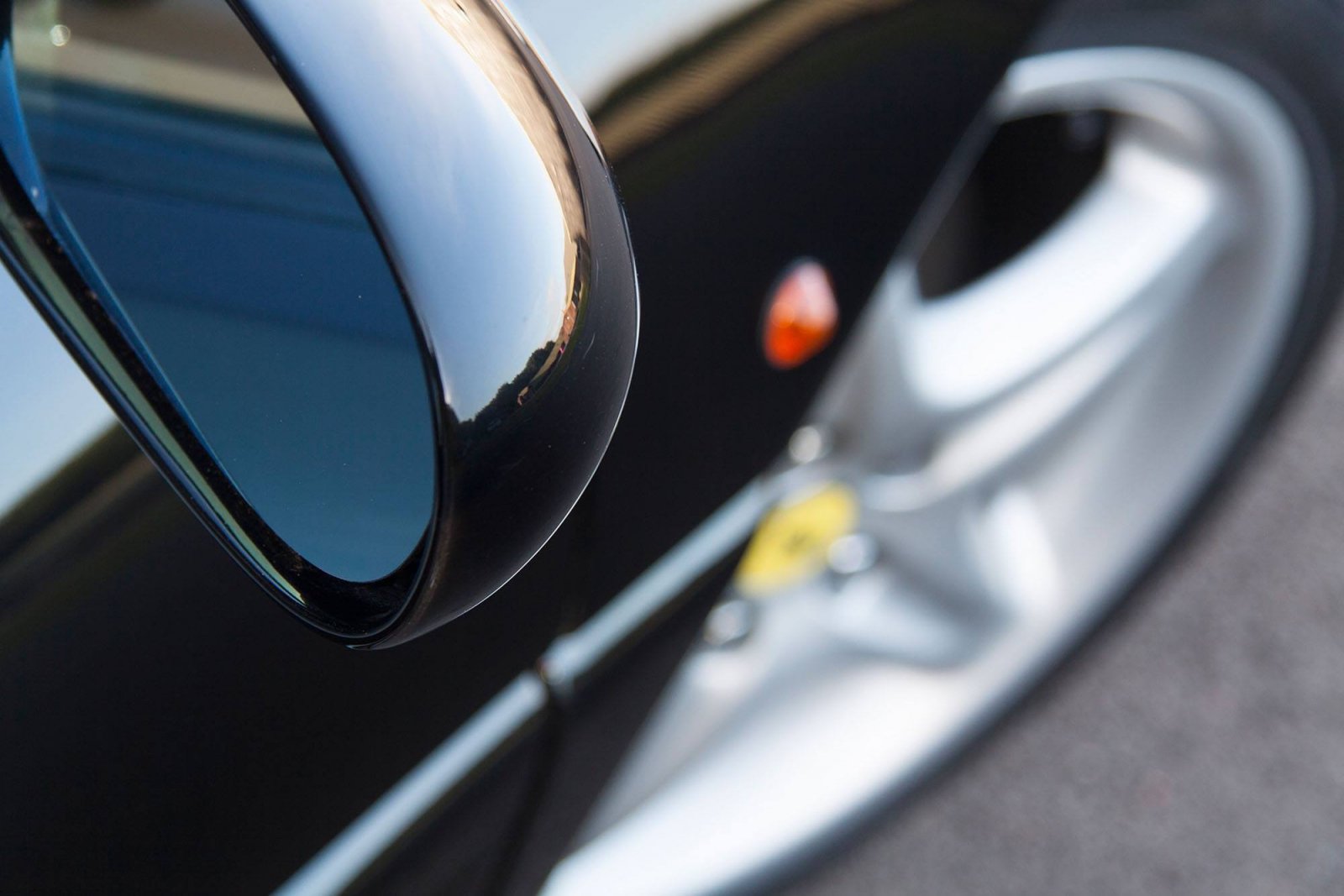 I think it started when I went to see my first Bond film in the cinema - Goldeneye as an 8 year old. The intro was kicked off with Pierce Brosnan giving Ferrari’s latest release a run for its money into Monaco in the prehistoric DB5. Pierce beats the over-confident woman down the mountain in a fashion that would do Sean Connery proud. Later in the film 007 continued to celebrate British engineering by choosing BMW.

Jamiroquai’s Cosmic Girl is released a year later & the music video is a game changer, I see the car in a totally different light to a space disco soundtrack. A Ferrari F40, purple Lamborghini Diablo SE30 & JK’s very own F355 GTS being enjoyed for what they are in a cosmic setting (Back roads of Spain I’m told).
Ferrari’s don’t have to be red as this video shows.. how stunning the F355 is in black

For the next 10 years F355 Challenge is played in amusement arcades around the Port & when PlayStation comes along the little supercar is raged until the controller lead is tugged out of its socket.

I’m 19 now & on a budget EasyCruise round the French Riviera I stumble across this car for the first time in the flesh. From the harbour you could do a lap of Monaco’s F1 circuit for €100. Not bad value today but it seemed like an unnecessary expense at the time even though mum had kindly offered to pay. But by god is it pretty.

2 years later oil & gas is booming & I get my first start as a saturation diver in Libyan waters. Long trips & handsome exchange rates from USD into GBP made me a pretty flush 21 year old. Pistonheads was trawled & look what I could buy for £40k! An F355 was within reach but I still lived at home, a 997 C2S was £35k & that means I’d still have enough for a Rolex Seadweller! But sneaking young ladies in past my ma would still remain. Hmm. I chose the sensible option of paying off a mortgage on a damp ridden apartment I let out to holiday makers during the drier months. Not long after the property crash reassured me that I should have stuck to throttle blipping & fannies dripping.

2017 I turn 30 and MrsPort agrees to go on a European road trip in a Cat D Porsche 944 S2 with camchain rattle so bad George McMillan personally recommends the highest AA cover I can afford. (Astonishingly it made the 2,800 mile trip for those wondering).
We move between Modena & Maranello soaking up as much as the Ferrari region as we can for 2 days of our 2 week tour.
A Ferrari hire store lets you drive any of the latest models for €250/€300 through the industrial highways during your 30mins of fame. Outside the shop sits this little F355 and I’m not going to make the same mistake again. Today, was my 30th birthday and I will meet my hero.
My wife reimbursed years of shoe shopping by waiting patiently outside. It wasn’t for hire. There was no negotiating either, the most accessible, available, plentiful model they have ever produced was not to be driven. Was this a testimony to the little supercar that the Italians themselves deem it as precious ? Or was it that the newer stuff was easier to maintain. Either way we take a tour of the museum of prancing horses which is about as impressive as a Testarossa’s build quality. To be fair it was under refurbishment then in April 2017 so it shouldbe finished by now. Behind velvet rope stood an F355 Challenge, eyes drawn down the side vents my mind still wonders where the door handle is & how it’s operated. ‘F*ck it just have a little feel’ and there it is, it feels like a rectangular lump of plastic, gripped the way you’d open an old filing cabinet full of faxed invoices.
3-2-1 *click* the door pops open ‘You d*ckhead Barry’ like stealing a sweetie & sticking it in your gob as a toddler there was no way out of this. *SLAM!* Bloody stripped-out race car. 2 security staff march over wagging their fingers in Italian & my shoulder’s reply.
I can sense we are being followed now so retire back to the Prosecco bar to prevent waking up next to a horse’s head.

This was an obsession that clearly wasn’t going to go away. Jeremy Clarkson was infected by the same disease.

Well, if I’m going to buy one il have to start familiarising myself with them. Black on black is what I thought I wanted until this black & tan example popped up with Foskers in September 2017. Its so beautiful that I have to share it on my instagram I’m stuck at sea so can’t view & a reoccurring hand injury causes havoc with the year’s earnings as a self employed diver. It’s sold in a matter of days but the fantasy remains.
September 2018 sees the car sold by Foskers AGAIN within 2 days. This is torture. I set about recreating this spec by viewing a cheap LHD GTS at GVE London without a stitch of history & a fair bit of TLC needing done (excuse the anagrams).

But it is what it is, a Rolex without its box or papers. Unless you intended to keep the car for life you were stuck with it & I was right, after 10 months with GVE it went to auction & achieved more or less the same as the original asking price after fees.
Another potential candidate popped up in North Shields & although black on black it was on my way home from Middlesbrough plus the further education would do no harm.
It had been professionally converted from LHD to right but it still needed tweaks like LHD loom extended to allow window switches to function both windows from driver side. Plastic cable ties held hoses in place in the engine bay but that was an easy fix. History was incredible, absolutely everything documented during the conversion & receipts since being delivered to Berlin in 1996. But it wasn’t tan leather, sourcing a RHD tan interior was near impossible & reupholstering it just wouldn’t be the same even if the car was already b*stardised. The Wolf-of-Wall Street Jordan Belfort esq salesman couldn’t have been more desperate, shouting ‘Take it for a test drive!’ as I exited the showroom and into the pouring rain. 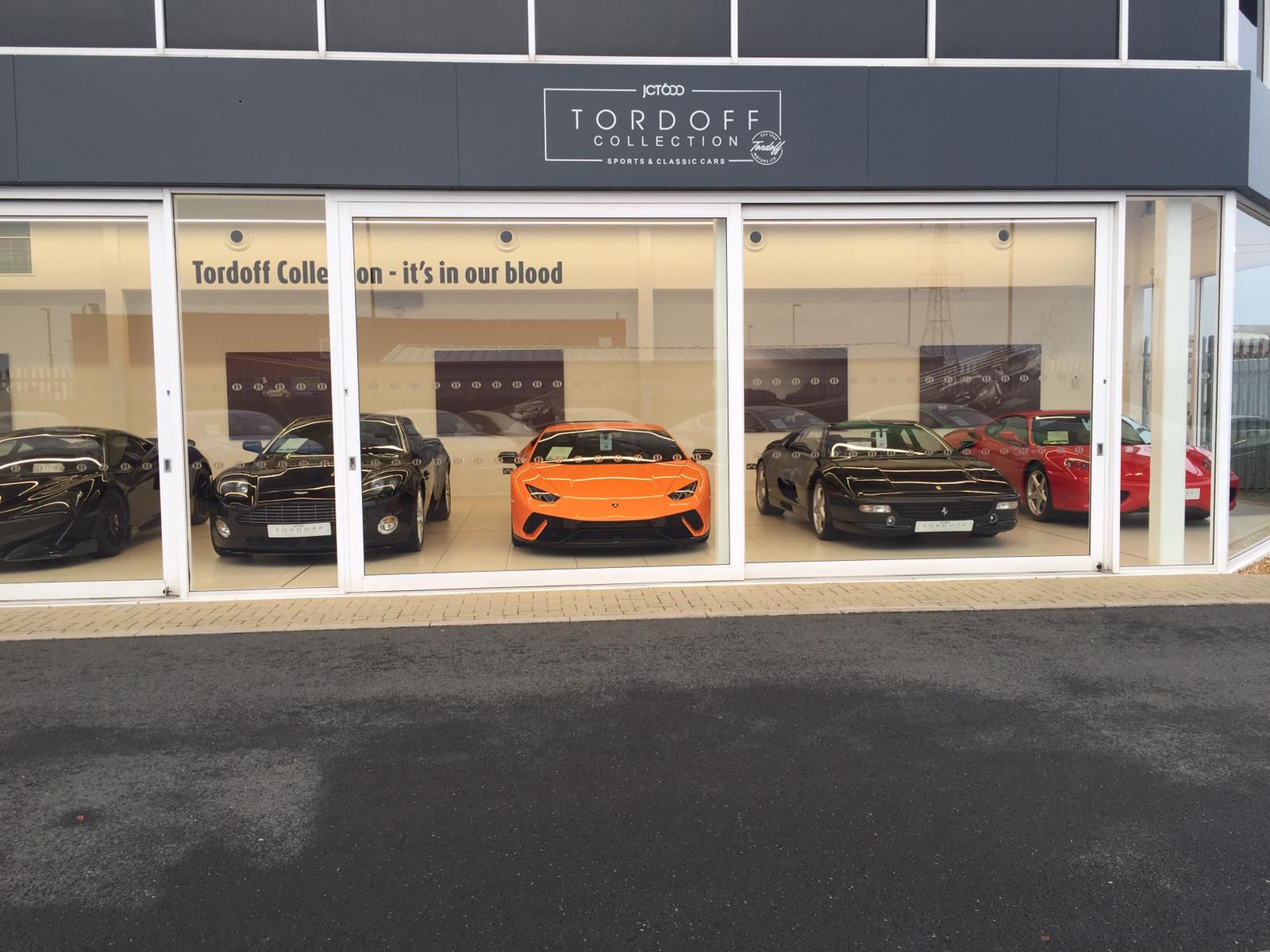 This next move was suicidal, I did everything that you shouldn’t do & called Foskers on my way to Cairnyan. Referring to the black & tan F355 they sold in September last year, I requested the current owner to be contacted to see if they would be willing to sell. I was desperate. I could not replicate this car. That was on a Friday & I never heard from them again, thankfully.

8 months later my wife and I are poolside in Jersey for our last holiday together as a couple with our first born expected in November this year. The intention is to pick up a Ford Focus RS Mk3 in Magnetic grey on the way home as a family car compromise. There was always about 4/5 examples within the desired spec available so I’ve never gotten too excited about it. The standard 355 search is thrown into all the usual search engines & there it is, on Pistonheads as a private sale. The moment was of contentment rather than excitement. Personally I prefer private as I get white coat syndrome in showrooms. They’re a bit like lap dancing clubs, dealerships, there’s only one winner and it ain’t you. I don’t even ask the essentials I just arrange a viewing & fly to Southampton.
Quick inspection, test drive in the rain, migrate to the kitchen where after some time gritted teeth exposed from the seller suggests it’s his pride I’m chipping away at not the price. Hands shake, a deposit is transferred & I confess reconnaissance of the car as he runs me into town to meet an old friend for beers. I’m not ashamed to say I did not sleep a wink that night, moved to the sofa & visited the toilet on more than one occasion, I was a sick boy. Overwhelming fear of what my father would think if he knew I’d sunk that sort of money into an Italian supercar from the 90’s. Even though I’m self made (if you could call risking your life for money ‘made’) it can be natural to subconsciously yearn acceptance from your father even as a grown man. Those who don’t I applaud you.

Collection is arranged through Stephen Hardy at CCRS, he really is good.

Dropped off at Charles Hurst Ferrari for its annual service, it had done

... 180 miles since it’s last and was about to go through it all again like a mosquito checking into a blood transfusion unit. It’s all about evidence with these and this thing has more stamps than Ian Paisley’s passport & more history than Rome. Aftersales Cooridinator Charlotte King couldn’t have been more accommodating & documented its time at Hursts whilst I waited patiently at sea. I opened every email at arm’s length through a single squinted eye expecting the upbeat Charlotte to announce the car was a ringer and there was Japanese knotweed growing in the trunk. Terrible stuff.
But no she built my confidence in the brand with each correspondence expressing that it was indeed a Ferrari, a good one at that and notan MR2. Well worth the 30% premium over the lower end examples viewed previously. 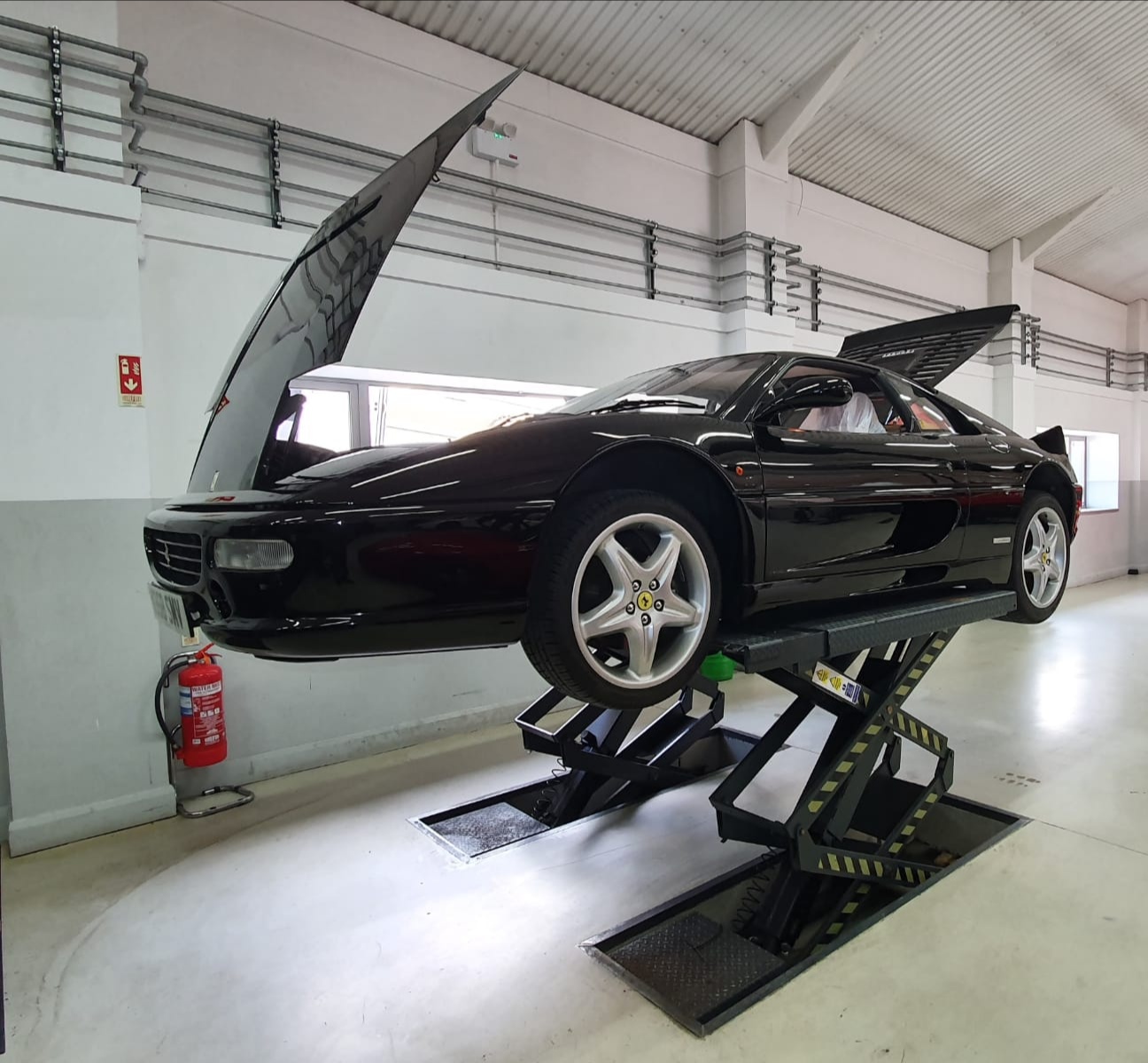 Next up in the relay was our own @big_pete PMG Autocare and I’m starting to pace the ship’s deck like an expecting father.
I’l let his pics do the talking 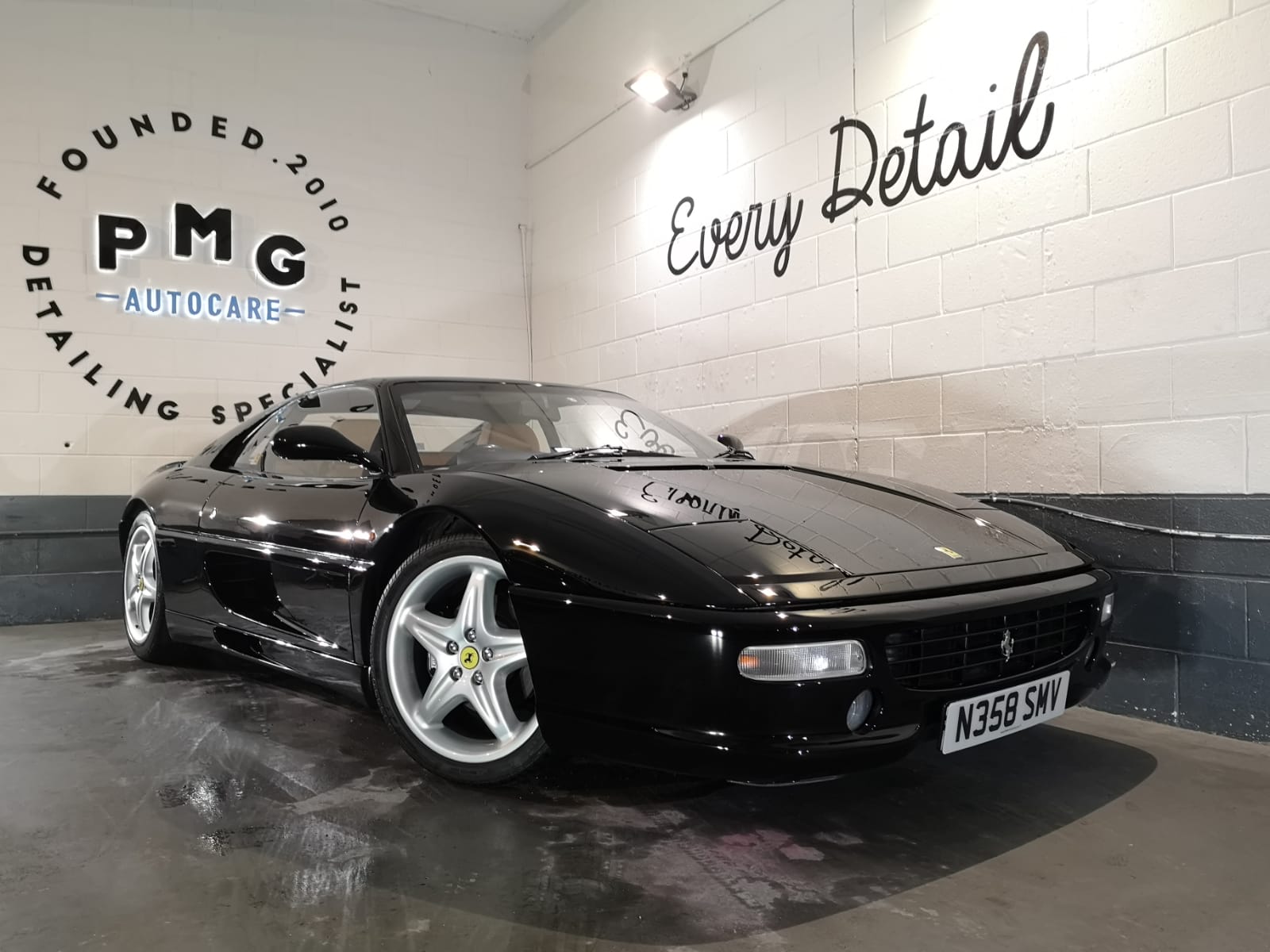 Love it buddy health to drive. This is one of my all time favourite cars.

You're my hero - that is superb and gis a go

YESSSSSS!!!!! An absolute favourite of mine.

Incredible and a fantastic read too. Congratulations @BarryPort she's an absolute beauty.

Automotive perfection right there! I spotted this on yours and Pete's instagram. Enjoy and well done on realising your childhood dream

The only Ferrari i'd want to own! Perfect colour combo...
FANTASTIC
Then went to watch this...

Great read. Man maths long game! Fez is absolutely stunning. And I’d have a go at onatopp in a DB5 any day.

What a write up. Enjoyed reading that.

Absolutely incredible. What a write up and what a car, always gives me butterflies reading stories of how people get to own their dream car and it’s clear you’re a very happy man and rightly so.

They are also one of my all time favourite cars, something I periodically migrate to the classifieds to dream about.

Health to drive and enjoy, hopefully I’ll get to see it round the port some time.

Probably the most enjoyable write up for a new car I've read on here.

What a fantastic purchase, health to enjoy.

@BarryPort seen this in the workshop. Looked great in the flesh

Heroic. Delighted for you Barry.

World class, was fortunate enough to drive my mates one up to AI back in the day, a truly memorable experience. Health to drive

Edit: Found the vid no idea why it’s titled 335 mind

Jonesy said:
@BarryPort seen this in the workshop. Looked great in the flesh
Click to expand...

Thanks, I caught it hiding in one of @niallod ‘s pics Congratulations. You have made the most unjealous man in history jealous.

Such a great write up I now want one of these. Health to enjoy thanks for a great read.