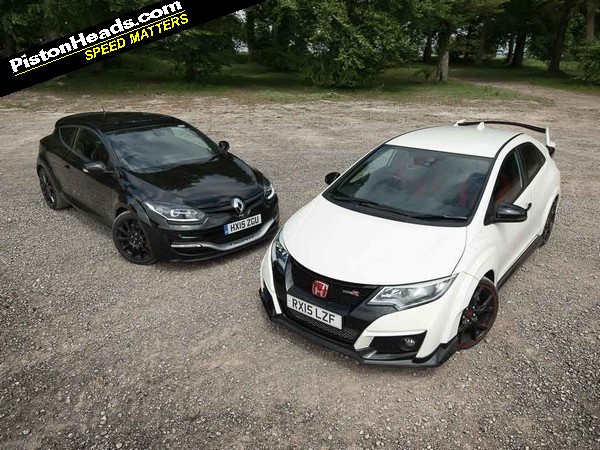 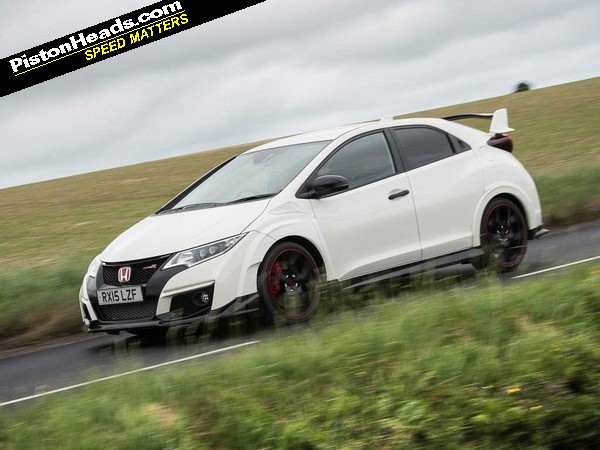 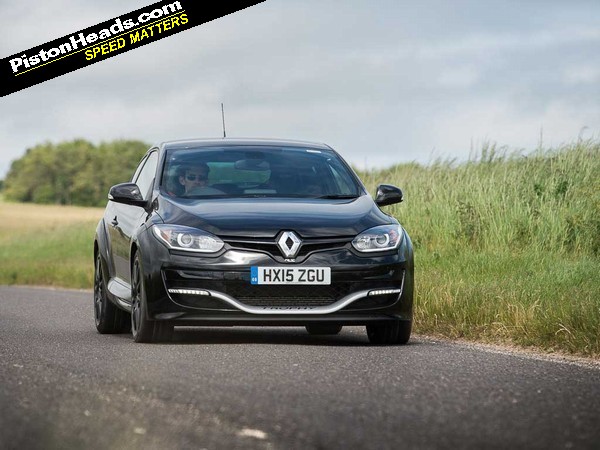 OK, the Civic Type R has had a lot of airtime on PH recently. And we've barely had time to digest the first drive from the smooth Slovakian roads and race track of the launch event. But then opportunity unexpectedly knocked to spend a day here in the UK with one. And with it a Megane 275 Trophy.

Had to be done, right?

The fundamental similarities between the Type R and Megane 275 Trophy are as interesting as the differences that reveal themselves when you drive them back to back. More on that in a sec.
The basic template for building yourself a hardcore hot hatch seems to have been set though. You need something around 300hp from a turbocharged 2.0-litre engine, preferably a manual gearbox, some sort of locking differential to put it to the road, independent steering axis front struts to tame the torque steer and someone with a set of brass ones to go and drive it round the Nurburgring in less than eight minutes. If you are part of the VW group you lose the fancy front struts but have the option of a multi-link rear axle and an active Haldex-based diff. But the fundamentals are all there.
For all the risk of sounding formulaic the way the different manufacturers have worked with these similar raw ingredients has given us some spectacular cars, all with unique characters and loyal fanbases to play to. We now live in the age of the £30K hot hatch but also one where the cars are faster, more capable and fun than ever. As both a Nurburgring lap time and, more broadly, a purist's driving machine the Megane was the car the Civic had in its crosshairs throughout its development and the benchmark by which it would be judged. So let's get to it...

Megane Renaultsport 275 Trophy
We've written a lot about the various hot Meganes on PH and though in relative terms an old stager it's still a firm favourite. Sure, there are newer hot hatches with fancier badges, nicer interiors and more tech. But purely as a driving experience nothing's yet matched the Megane, even if the Civic has technically gone round the 'ring faster and stolen its front-driven lap record. First strike to the Honda? By the numbers - 7min 50sec against the Megane's 7min 54sec - yes. But Renault arguably retains the moral high ground of actually selling a car identical to the one that achieved that standout time, albeit at significant extra cost to the one you see here.

Compared with the outrageous brashness of the Honda this Trophy looks commendably restrained and understated with no stickers, the optional Speedline wheels (5kg lighter than the standard ones), 'ring spec Michelin Pilot Sport Cup 2 tyres and - the big one - the Ohlins damper package. The Type R had to make some noise about its return after a long period out of the market and has done so with perhaps the most extreme aero package ever applied to a production hatch. The Renault carries off an air of Gallic self-assurance as contrasting as the black on black colour scheme against the Honda's Championship White.
From the stats it looks like another wallop from the Civic though, the Trophy down 35hp and 30lb ft, three tenths slower to 62mph and nearly 10mph behind on top speed. But, as we know, the Megane doesn't depend on horsepower for outright speed.

And those Ohlins dampers are nothing short of sensational, especially on British B-roads. The helical limited-slip diff may help traction but even the Perfohub front struts can't isolate wriggles of torque steer under power and there's an off-centre twitchiness to keep your mind focused. The Civic has a similar set-up but also two-mode dampers. Where the Megane's passive Ohlins suspension scores is in the pillowy body control that manages to be both totally nailed down but also pliant and sympathetic to what's going on under the tyres. It's relaxed and languid but also blisteringly fast, the dampers freeing up thinking time to consider how best to deploy that trademark Renaultsport adjustability.

As is typical, the Megane is all about the front end and encourages you to explore the options for rotating the rear to get it pointing where you want it. You can feel this through the stiff carcasses of the Cup tyres up front, the lack of the 'comfort' understeer you get in rivals like the Cupra 280 making it feel properly pointy. This also means it takes a while to get heat into the rear tyres and, until you have, the back end can feel pretty damned lively. It's not hard to build trust in the Megane though - the weight to the steering is consistent and trustworthy, the engine boosty but not aggressively so and the control weights all expertly judged and brilliantly balanced. Credit to Renault for proving everyone wrong that a 'ring specific set-up isn't relevant for road cars.

There's nothing subtle about the speed the Megane carries but the communication it feeds back at you is beautifully filtered. The more linear throttle and outright lack of power may convince some it's not as 'fast' as the Civic or other more aggressive rivals. But the Megane's pace comes through its composure and balance. For those able to exploit these abilities it remains a uniquely enriching experience.

If you think the Civic Type R looks mad wait until you drive it! You'd hope for nothing less given the hype, the build-up and the unapologetic appearance but even then the sheer ferocity of the Civic's driving manners are laugh out loud exciting.

For all the novelty value of the external aero and wacky double-decked dashboard there's obvious logic and rigour gone into stuff like driving position, control weights and other interfaces. The red Recaros grip you tightly, the wheel pulls into your chest and the front and centre rev counter and digital speedo above it draw your line of sight into the road beyond. Teasingly there's still an '8' on the rev counter but don't kid yourself - the fun is over 1,000rpm before and announced with converging shift lights above the speedo for the full wannabe race car effect.

Is there any incentive to go even that far though, given peak torque is at 2,500rpm? Thankfully yes, the turbo spooling up vocally and delivering a thrilling wave of boost that lasts all the way to the redline. By which point you'll be travelling very quickly indeed. It's full-on and completely addictive and fair play to Honda for accepting that if it was going to go turbo it was going to go properly turbo, sound effects and all. The short-throw gear shift encourages you to keep it on the boil, even if there's a pronounced flywheel effect when you upshift on the redline and subsequent unflattering flare of revs.

Like the Megane you get the sense this was a car set up by folk with a real passion for driving. Little things like perfectly placed pedals that help you deploy your fancy footwork to full effect, the spot-on driving position and unburstable sense of enthusiasm all add to the fun. And by heck does it feel quick.

The steering feels much faster and more urgent than the Megane's and the suspension more tied down and not quite as suited to fast B-road pace, especially with the VDS dampers in the stiffer 'R' mode. This also sharpens the throttle and makes the interior and instruments glow red, just in case you hadn't got the message.

For all the sense of urgency and the extra power the Civic seems slightly less afflicted by torque steer than the Megane. And on smoother sections of tarmac and faster, more open corners feels absolutely hardwired into the road. Whether that much vaunted aero is making any difference at road speeds is questionable but it certainly feels the more planted car.


VerdictOoh, this is going to be tricky. Emotive factors like the looks and practical ones like the number of doors (the Megane is basically a coupe, the Civic ... a Civic, albeit a completely bonkers one) may well dictate which one fits into your life better. But taken purely as a driving tool which gets the nod?

Those 'ring lap times would hint that in outright, point to point pace less separates them than the spec sheets suggest. The way they achieve it, and the experience you have while doing it, is very different though. With its aero, its fast-geared steering and four-square chassis the Civic feels very much like a circuit racer, albeit one that works and entertains on the road. The Megane has a more traditional hot-hatch balance, all about the pointy front end and throttle adjustability with a tarmac rally car's ability to flow over twisty, broken tarmac rather than try and hammer it flat. Those trick dampers means it feels confident and composed even in those transient states the Civic seems in such a hurry to escape and, on the road, those nuances make it the more immersive experience. On a circuit you'd suspect things might be a bit different - if that's not an excuse for a rematch nothing is...

Whether that's a certain forest lined one in Germany or not it's as if the two cars arrive at a very similar conclusion from very different directions and, accordingly, separating them is a very difficult call. On the basis of this drive the Megane still nabs it though, just. It's perhaps not as full-on or ultimately exciting as the Civic in looks or driving style. But that subtlety and precision about its behaviour on the limit are something to savour and remain a very rare quality in performance cars of any price.

You must log in or register to reply here.

Shedding in a Civic