Saturday 14 May saw the area around Laurencetown echo to the sound of sweet mechanical music as the Trailertek Drumhorc Hillclimb returned to the Millers Oils Northern Ireland Hillclimb championship for the first time since 2019.

With the sun splitting the trees in what was the warmest day of 2022 so far, sixty competitors lined up to attack the roads in the area of Drumhorc.

With a “hill” which is more akin to a rally stage as it winds its way through the countryside using junctions, square lefts and even a daunting section past a fence, everyone was looking forward to getting a blast up a hill which offers the driver a bit of everything.

The whole event had a positively relaxed feel about it from the far end of the paddock to the top of the hill, as everyone was out for a good day’s craic.

Once the event got underway it ran faultlessly, with everyone getting 2 practice runs and 3 timed runs up the hill in superb sunshine. Fastest out of the blocks was Graham Thompson, who once again proved to be the man to beat in his home-built GTR Turbo. 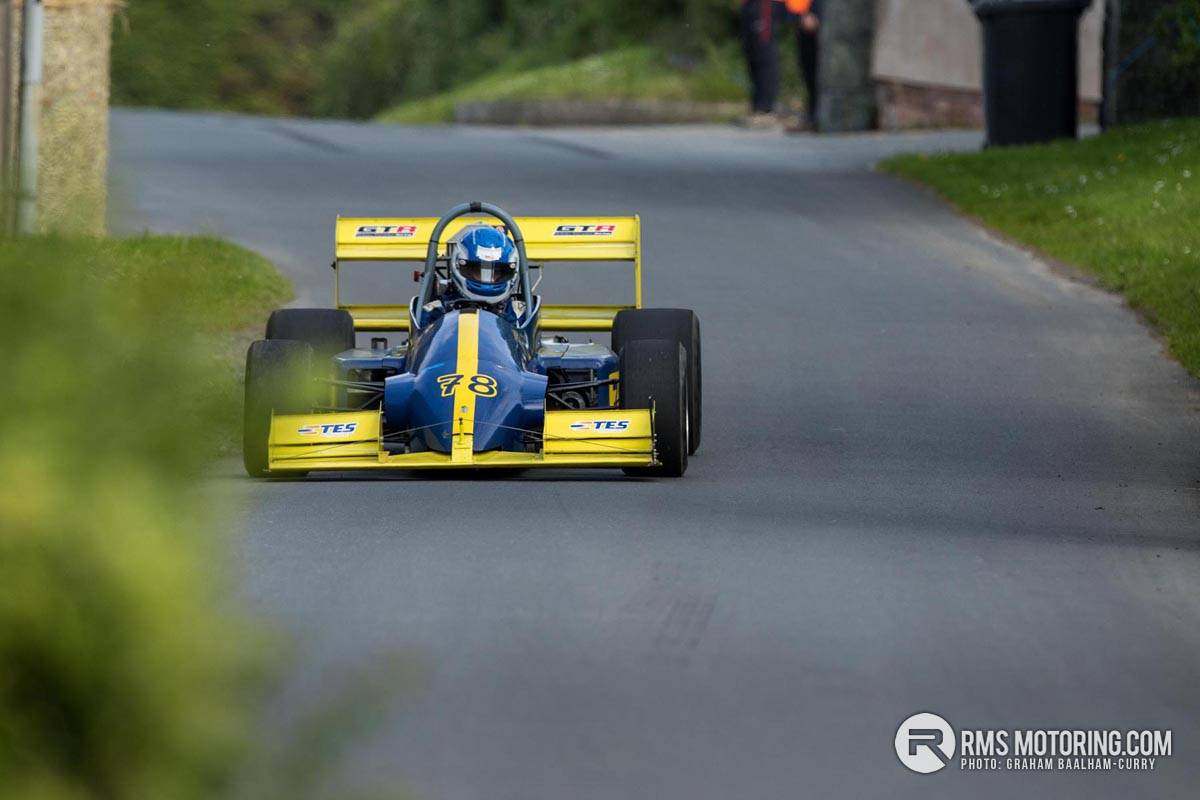 Graham, who has won the NI Hillclimb Championship a total of eight times, proved to be unbeatable on the day despite Tim Woodside, John Donnelly and Steven Robb all trying to take the win.

At the end of the day, Thompson was crowned king of the hill yet again with a fastest run of 49.16 seconds which he claimed on his third run. Incidentally all of Graham’s runs were within the 49 second mark, and all of his 3 timed runs were sufficient to win him the event.

Second on the day went to Tim Woodside, who pushed hard in his Pilbeam MP82 to try and catch Graham. Tim is returning to the sport after a lay-off and despite winning the previous round two weeks earlier at Craigantlet, Tim is still learning the car and learning hillclimbing again. 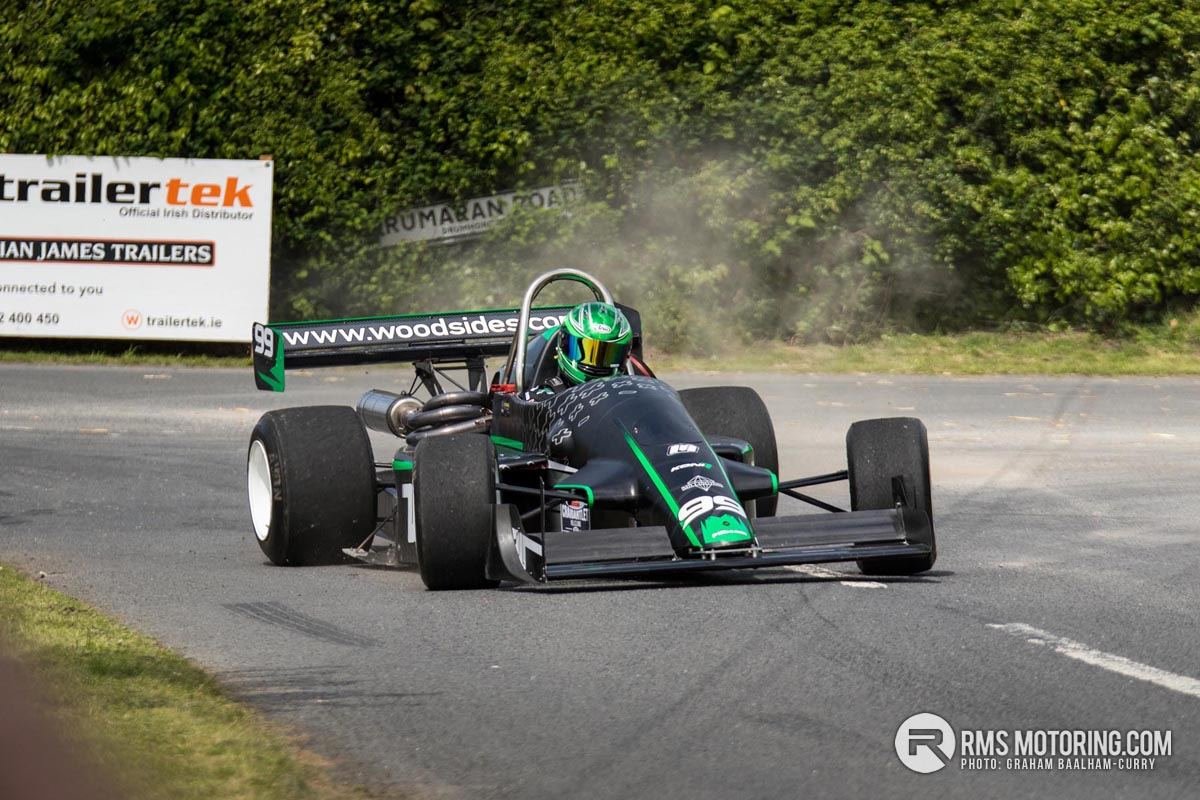 This event, run by Newry and District Motor Club, has a reputation of attracting a lot of local rally men to and today was no exception. Looking down the entry list there were a lot of new and non-regular hillclimb competitors who come to this event for a great days craic.

Drivers such as Matthew McGaffin, John Devlin, Norman Armstrong, Andrew McGaffin, and Raymond Johnston, all bring their Ford Escort rally cars out to compete for the honour of fastest rally car up the hill.

We must also mention Noel Valley when discussing the rally cars, as his beautiful Toyota Corolla was a sight to be seen as he chased the Escorts ahead of him, this was one of the most beautiful cars amongst a paddock of stunning pieces of motorsport engineering.

The winner of the title of  “fastest rally car on the day” went to Matthew McGaffin who powered his escort up the hill in a monstrous 56.52 seconds which saw him 10th overall!!

In terms of the championship regulars, Daniel Campbell took the honour of fastest tin-top as well as the modified saloon champion on the day with a stunning 55.31 seconds run, which saw him win both his class and category, as well finishing 5th overall!!

Runner up in the modified car section, which Daniel won, went to Ian Lancashire in his Subaru Impreza who did a 55.95 seconds run and third went to Matthew McGaffin in his Escort on a 56.52 seconds run. The third placed championship contender was William Carey in his Mk2 Escort. 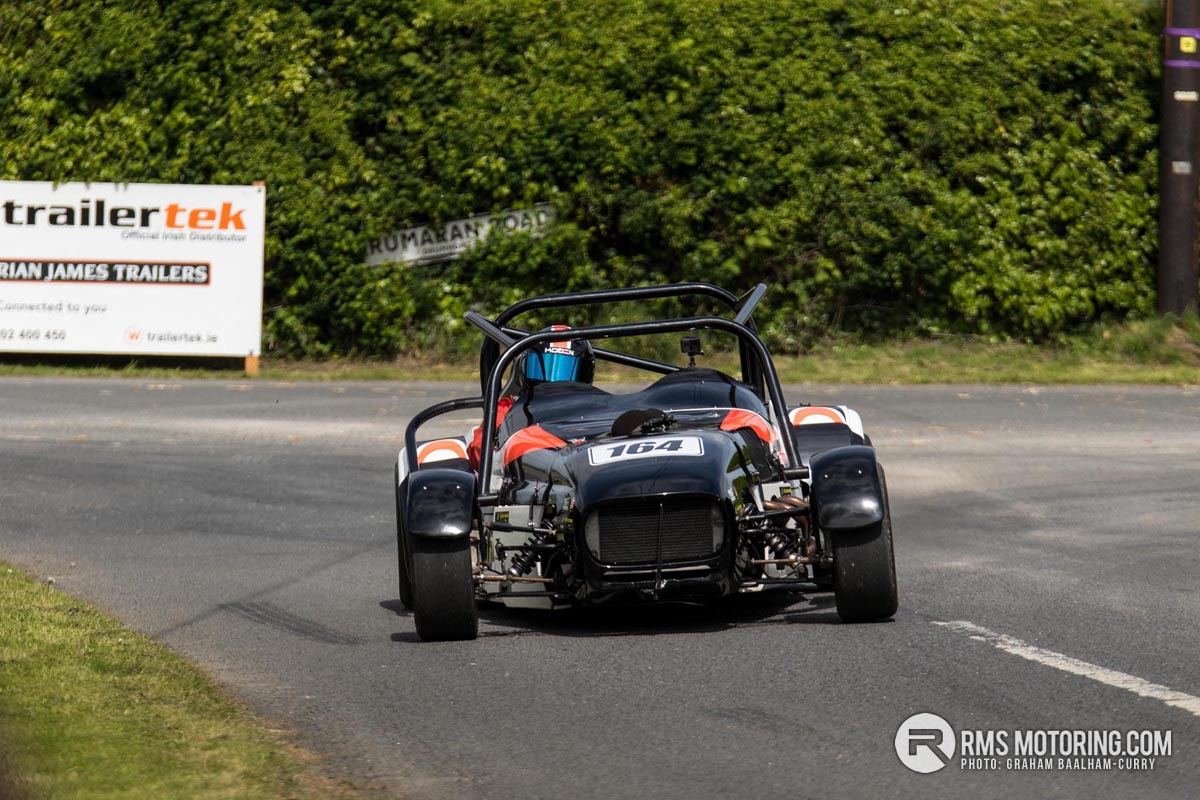 He narrowly pipped Jack Boal to the category win by a mere 0.13 seconds as jack went 7th overall on his way to winning class 7 in his GTR Hyabusa with a 55.45 seconds run. Third in the specialist category went to another hard charging RSR Escort, this one being driven by Patrick Roche, who finished 9th overall, and second in class 8 with a 56.09 seconds run.

In terms of the road going category, Adrian Mulholland took the category win in his Escort Mk2 despite only completing 1 timed run. Adrian finished 34th overall with a 62.98 seconds run which was a mere 1.87 seconds ahead of  second road going competitor, Stephen Wishart, in his little class 1 1600cc Peugeot 106 which he uses for his daily commute to work!

Third in the road going category went to arguably Northern Ireland`s fastest mini man, Colin McDowell, in his Mk1 Mini. Colin’s exploits in his mini are known the length and breadth of the British Isles and beyond, as he drives it like he stole it and is well known on rallies to catch and overtake cars which should, on paper anyway, leave him in their wake. 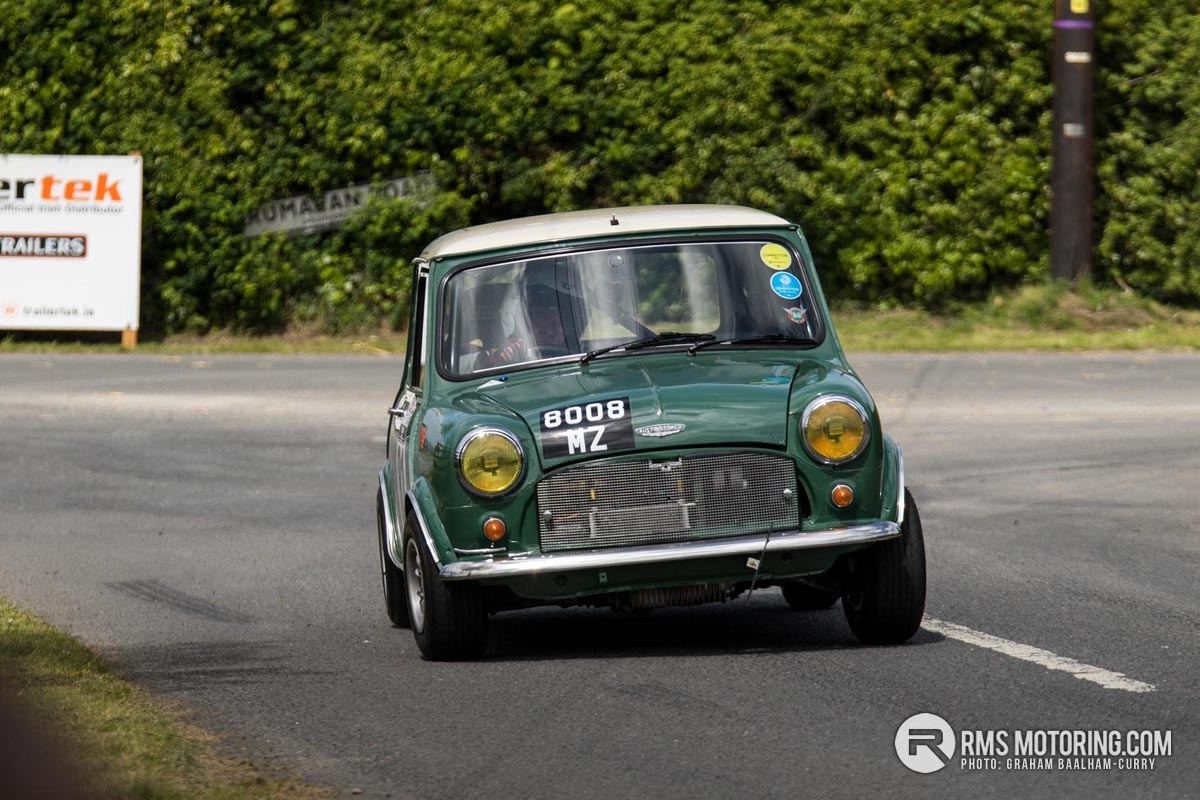 Colin had an unfortunate end to his previous event at Craigantlet, however, battles between him and Gerry McGarrity over the last 3 seasons have been incredibly close and great to watch. These two drivers really have upped the pace and have brought others with them, too.

In terms of the rest of the field it was great to see so many competitors out having a day’s craic, including some who haven’t been out as much lately. It was good to see Jonathan Strain out competing as a shared drive in his brother, Andrew’s little 205. Sadly Johnny broke the golden rule of dual driving and beat Andrew in his own car.

Interestingly, both these brothers have completely opposing driving styles, with Jonathan being maximum attack and aggression, whereas Andrew is more controlled, smooth and carrying more speed deeper into a corner which was superb to watch the difference in the way the same car came up the hill depending on its pilot.

Stephen Walsh was back out again in his lovely Escort MK2 which really is too nice a car to be competing in, and Paul Montgomery made a re-appearance for the day in his Subaru. Rumour was that he also washed the car for the day out as well!!

Dara Fay continued with his giant killing performances to finish 24th overall ahead of some impressive machinery. Lastly, a massive mention is due to local lad Dale Singleton who made his hilclimb debut in his Ford Fiesta race car. Dale was driving like a 20-year professional as he threaded this wee car up the hill so smoothly and confidently. It is obvious that he had been listening to some of the older hands in the Aitken / Singleton camp and had heeded what they had told him about maintaining momentum and being smooth. I tip this young lad as a star of the future.

In terms of stars, for me the star of the day was Tim Woodside who once again disproved the theory that single seaters are point and shoot, straight line machines. Anyone who saw his drive on Saturday will agree.