You are at:Home»Racing»Slick Day of Action at Kirkistown Trackskills
By Donal O'Neill on September 17, 2020
Tweet

If Carlsberg ran track days… I think that would be the opinion of most of the participants at the Trackskills track day at Kirkistown on Sunday 13th September, 2020.

Not absolutely all! The unfortunate Ricky Burke hauled his nice red Clio 197 all the way from Dublin. He was there for the first time, went out and had a great run in his initial session. Unfortunately, when he went to go out again, the key for the car was nowhere to be found. He searched everywhere and I mean everywhere! End of fun for the day.

A phone call to Dublin the next day revealed that one of those Kirkistown Gremlins, you know the ones that usually eat brake pads, had taking a liking to his key and stashed it down the chassis leg!

Another interesting incident involved the sudden appearance of a mangled pulley belt on the track at the start and finish, during the first session. Unfortunately, it belonged to Chris Stewart’s Clio 172 and that was his day over as well.

But enough about misfortune. The sun shone all day. The track was perfect. Everyone behaved and many tired smiles were testaments to the fun that was had.

Norman McNaught really enjoyed himself in Roxy, his Mazda RX8. He is getting quicker all the time in this car.

Tony Greenan brought his extremely rapid supercharged Elise back to play. It looked and sounded great. Steven Hawthorn fixed a 360º camera inside it and the results can be found on social media. 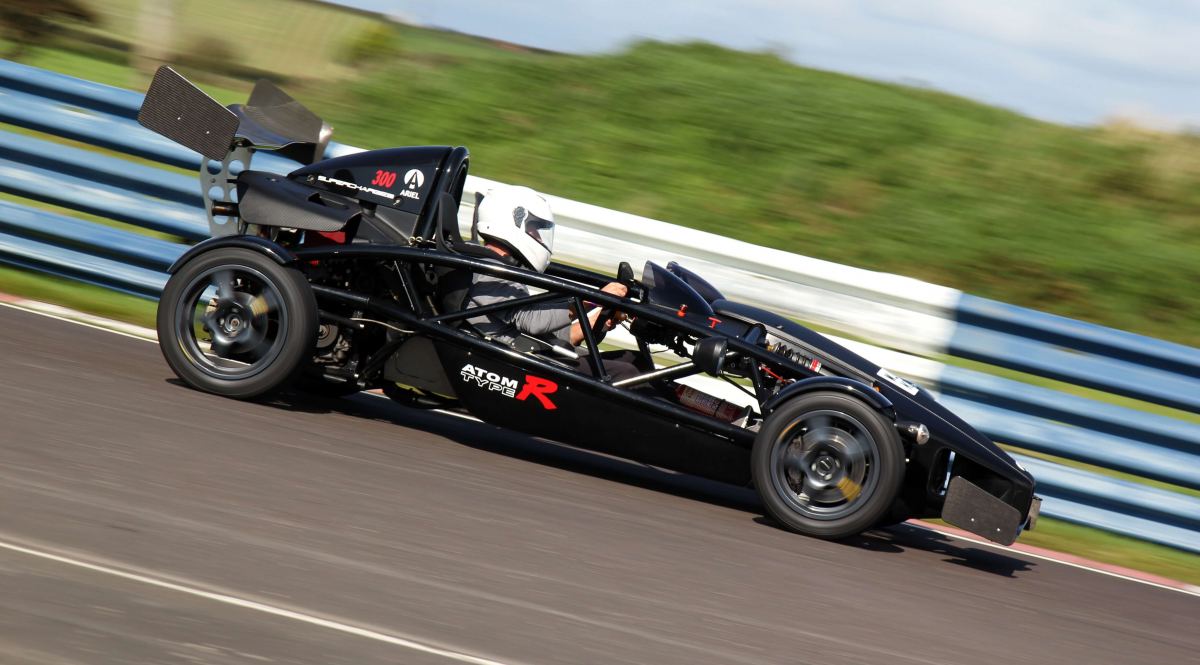 Another Hilltown man, Neil McGeogh enjoyed the conditions to the full in his Ariel Atom.

Mark Stewart, who was out in an Audi R8 in August, brought a Time Attack Championship winning Astra, this time. It looked brilliant and went in a similar manner.

We were spoiled for Porsches. Timothy English brought his quietly understated 911 Carrera 4S and went very rapidly. Andrew Fox returned with his very well sorted 911 GT3. Justin Tain brought his old but beautiful silver 911. It went very well and it is amazing to see how much bigger the 911 has become over 20 odd years. Justin’s looked tiny beside the other two.

I may be mistaken but I think this was the first time we have had a Saab 95 Aero at one of our events. Paul McGrotty brought his and had a ball!

Marc Dowie made a welcome return but was unhappy with an intermittent fault in his BMW Compact. He still lapped very quickly.

Connaire Finn, as usual, was extremely quick in his Ginetta G50.

Arnold Gibson and Stephen Potter did many laps in close company in their respective BMW M3s, while Stephen Van Ristell kept a respectable distance from them in his model.

Glen Stringer brought his unusual MNR VORTEX, a 1000cc bike engined Locaterfield type machine and had a fast and reliable time. Meanwhile, Eric Fulton was having, what might be, his swansong in his ex-David Mutch Stryker Fireblade. As usual, this immaculately prepared machine was going well and Eric wasn’t sparing the horses. This car would be a great buy for anyone interested in these type of machines – talk to Eric.

John Lyttle and Raymond Grimes brought their trusty Civic and broke the exhaust on their second run. Cue a run across the Bog Road to East Engineering for instant repairs by David Cousins. Another driver to benefit from David’s service on the day was Paul Sheridan, who needed a replacement air flow meter on his Mazda MX5.

It was nice to see Graham Wilgaus back after a long time. He went well in his Fiesta ST.

Donal Lively and Jim McShane shared the Sheane, after Jim’s Escort refused to start that morning.

In all, it was generally a great day. Thank you to the marshals and medical crew and to everyone who contributed to the happy vibe.

The next one is on Sunday 11th October. Book now on www.trackskills.com.

Read More on the Forum: Show all 135 comments