Kilrea’s Desi Henry and County Donegal’s Paddy Robinson have won the Samsonas Fivemiletown Rally, round one of the McGrady Insurance NI Forest Challenge!

Based from the Ecclesville Centre in Fintona with nine stages in the forests south of Fivemiletown, Henry made his intentions clear from the outset as he took control of the Omagh Motor Club organised event from the opening stage. Driving his Ford Fiesta, he and Robinson set a string of fastest times that saw them lead the event by 15 seconds by the time crews reached the mid-event service. 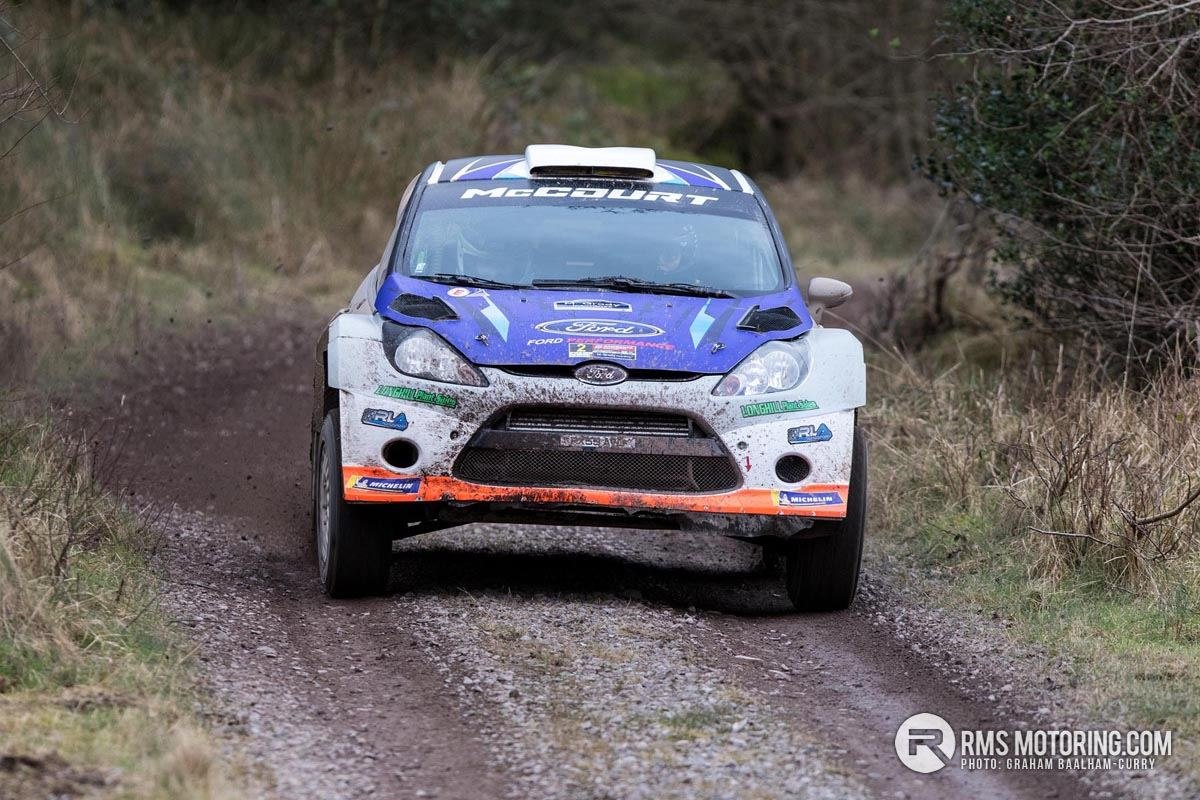 Cathan McCourt, who has previously finished as runner-up on the event, was a consistent second during the early stages. He was taking his time to get used to his new Fiesta but he really started to get into the swing of things after service.

Fastest on stages six and seven, he snatched almost five seconds back from rally leader Henry. However, it was too little, too late, and with two short stages remaining, he was unable to maintain the pressure on his rival.

Henry fended off the challenge with another fastest time of his own through the penultimate stage eight, and a measured drive over the final test ensured the Kilrea driver sealed the Samsonas Fivemiletown Rally victory!

“We both went out on a big push after service,” Henry explained. “Cathan’s two-litre car has more power so I knew he was going to be faster than us on the big straight in the Jenkin stage. I was surprised he didn’t take more time out of us on that one but we were trying hard. It was a hairy enough run for us!”

“It was a great event,” he added. “Some of the stages were short but they were very technical.”

In second, McCourt was gracious in defeat. He was encouraged by his pace in his new mount and will be one to watch during the course of the season.

“We had a good push on the first two stages after service,” he admitted, “but we didn’t push on the last two.” 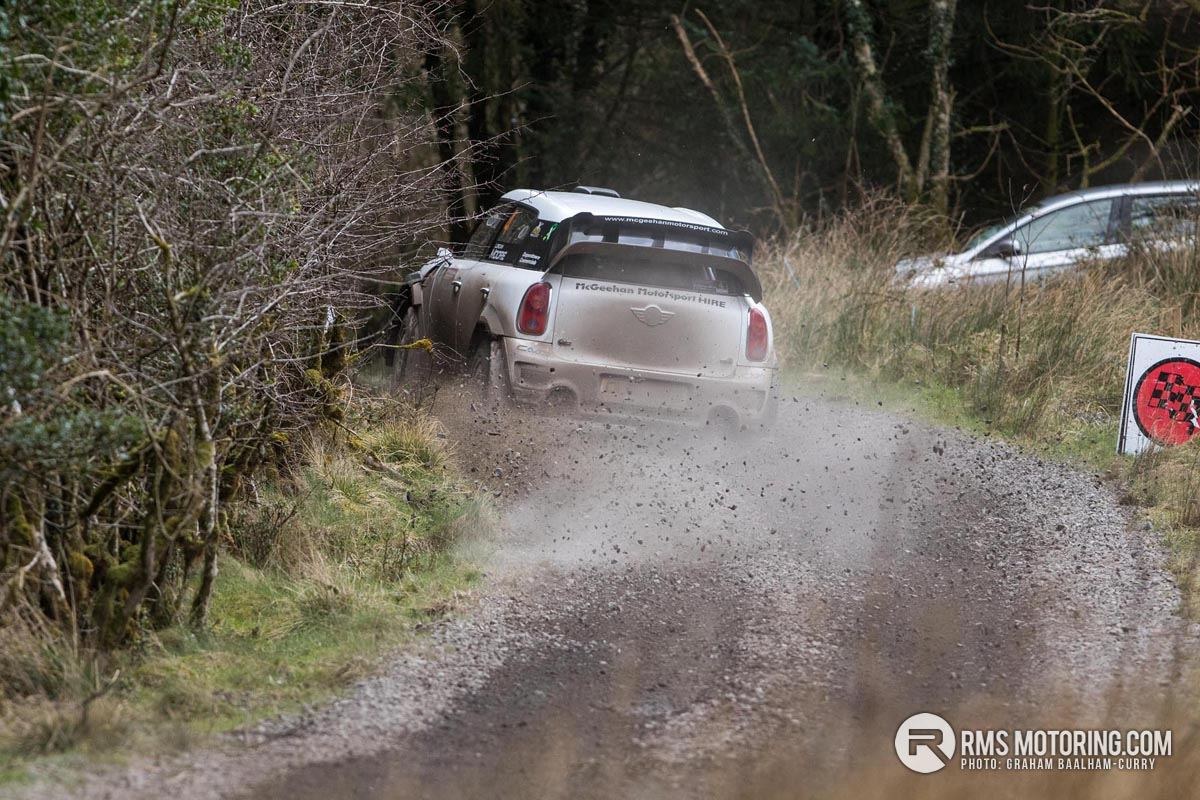 Vivian Hamill was another driver who spent the day getting used to a new car. Navigated by Lorcan Moore, Hamill had a Mini WRC at his disposal for the first time. He initially trailed Mark Donnelly after stage one but he moved in front after the second test. Hamill later had to deal with some paddleshift issues but managed to stay in third overall until the finish.

Mark Donnelly dropped a few more places during the day as he wiped away the cobwebs after being out of action for a number of years. Instead, Conor McCourt and Caolan McKenna finished fourth overall with their Skoda Fabia, more than 13 seconds clear of the Fiesta piloted by Jason Mitchell and Paddy McCrudden who were slowed by a misfire during the latter half of the rally.

With Mark Donnelly and Stephen O’Hanlon in sixth, Gareth Mimnagh and Barry McCarney claimed seventh despite losing around one minute on the opening stage which potentially cost them a couple of places.

“We stalled on stage one,” Mimnagh explained, “and then the car refused to restart. But we managed to set top three times on the last three stages, including fastest time on the final stage.”

Niall Henry and Barney Mitchell secured eighth overall after losing some time with gearchange issues in their Fiesta. They headed home the Evo belonging to Derek Mackeral and Thomas Wedlock, while David Crossen and Aileen Kelly completed the top 10 and won the two-wheel-drive category.

Event sponsor, Martynas Samsonas, ran out of luck once again at the Fivemiletown Rally. He was comfortably in the lead of the 2WD category with his stunning BMW and was as high as seventh overall. Sadly, he was forced into retirement with mechanical issues after the sixth stage, leaving the battle for the spoils between David Crossen and Shane McGirr. 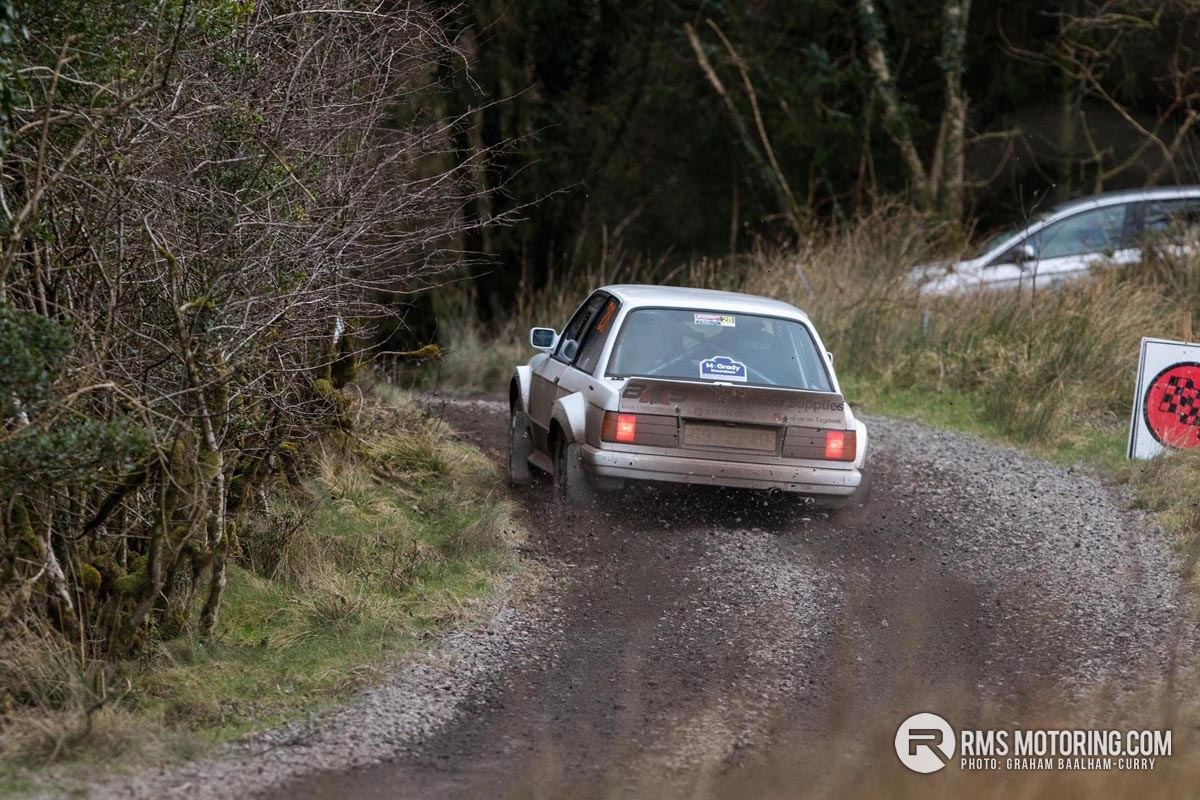 Local man McGirr was just three seconds in front of Crossen at the mid-event service but McGirr’s rally unravelled when he rolled his Starlet. He managed to get back on track and finish the event but any chance of the category win had evaporated.

“We went off the road and put the car on its roof,” McGirr explained. “Some spectators pushed us back on our wheels and we were able to keep going.”

There was no such trouble for David Crossen who pulled out all the stops over the closing miles. With McGirr in trouble, Crossen and navigator Aileen Kelly rallied to the top of the two-wheel-drive podium and stayed in front to claim the win.

“It was a brilliant rally,” an overjoyed Crossen said at the finish. “It was my first time here since 2014 and I really enjoyed it. The stages were great and it was a very well run event.”

McGirr and Denver Rafferty had to settle for second in the category, finishing comfortably ahead of Adrian Hetherington and Ronan O’Neill who enjoyed driving a MkII Escort for the first time in a few years! 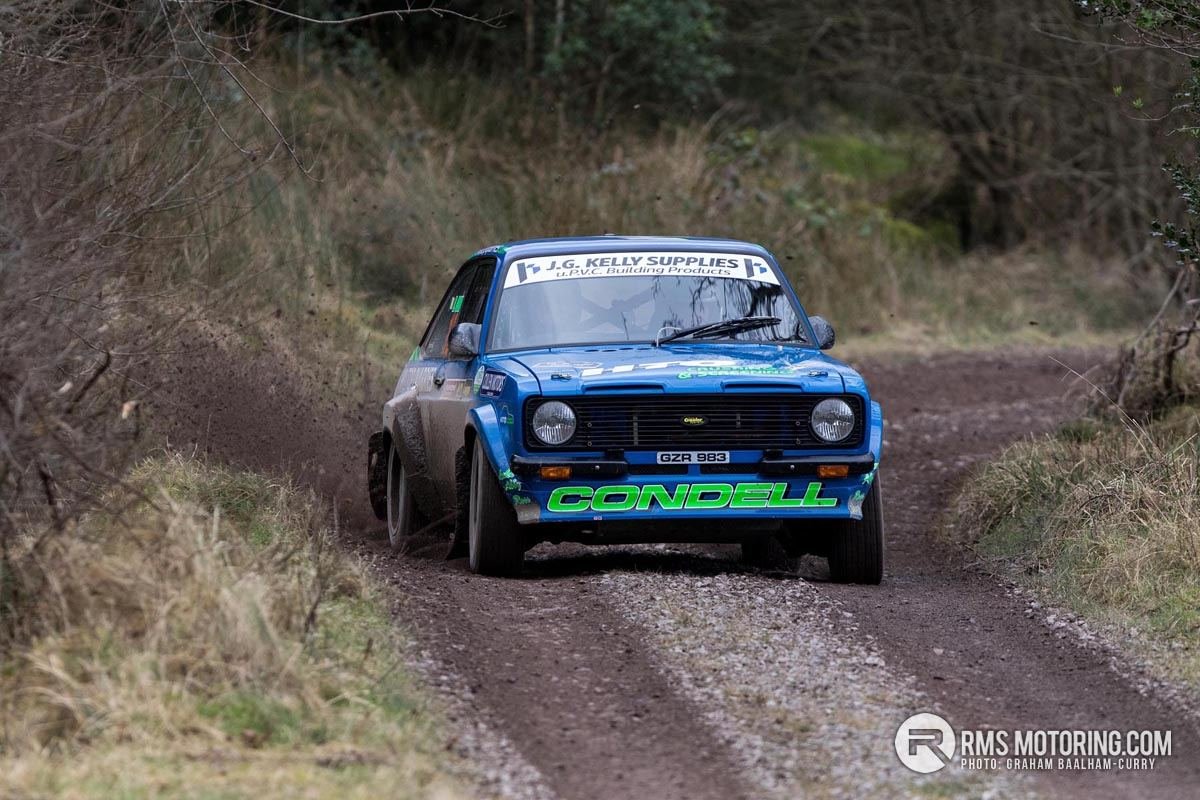 Retirements during the day included Michael Carbin and Conor Mohan who reportedly went off the road in their Evo after being as high as fourth overall. Frank and Lauren Kelly retired their Escort with mechanical trouble, and Robert McKelvey exited the event with electrical gremlins.

Spare a thought for Ballymena’s Harry Johnston. He was looking forward to his first event in a newly acquired BMW E30 but fuel pump dramas forced him out of the rally before it had even started. After two fuel pump changes, he eventually had to admit defeat.

The Samsonas Fivemiletown Rally hosted the opening round of the McGrady Insurance NI Forest Challenge. Round two of the series takes crews to the Lakeland Stages on 3 September. For more information, visit nirallychampionship.com/forest-challenge.

*Results remain provisional until declared final by the event organisers.