This is BMW’s new flagship EV, in the i4 range with this being the performance M50 model. BMW are no stranger to producing EVs over the last decade but this one is set up to be the big hitter due to its familiarity in this G26 platform and the i4 is akin to a 4 series Gran Coupe with the internal combustion engine and associated powertrain removed and replaced with batteries and in this case two electric motors, front and rear.

Our car on test, provided by JKC BMW,  does look striking in Sapphire Black, which suits the large front grille that has been so derided in when it was first launched in the G80 M3, but with time and styling tweaks I think it actually suits the car well, and gives some much needed front end interest where some EVs fall flat due to the fact no actual front airflow is required.

Speaking of styling, BMW do love some virtue signalling, such as blue surround on the BMW roundel, and blue cabin styling to less than subtley denote its EV credentials. But there’s also M badging on this i4, being M performance fettled although not an out and our M-car. Think M440i rather than M4.

The M50 sits above the i4 40 in the range, the former having 540bhp (using boost mode) and the latter with 340bhp, which is also only single motor rear drive. The M50 feels very quick, with a thick spread of torque which doesn’t seem to tail as abruptly as it’s main rival, the Model 3 Performance.

Prices start at £64k before you start adding options to the BMW i4 M50, and £52k for the i4 40, the dual motor adding nearly 200kg but cutting the 0-60 sprint between the two from around 5 seconds for the 40 to 3.9 for the M50. Interestingly for a platform share, the weight penalty to transform from ICE to EV is a not insignificant 550kg, bringing the kerb weight of the M50 to around 2.2 tonnes. 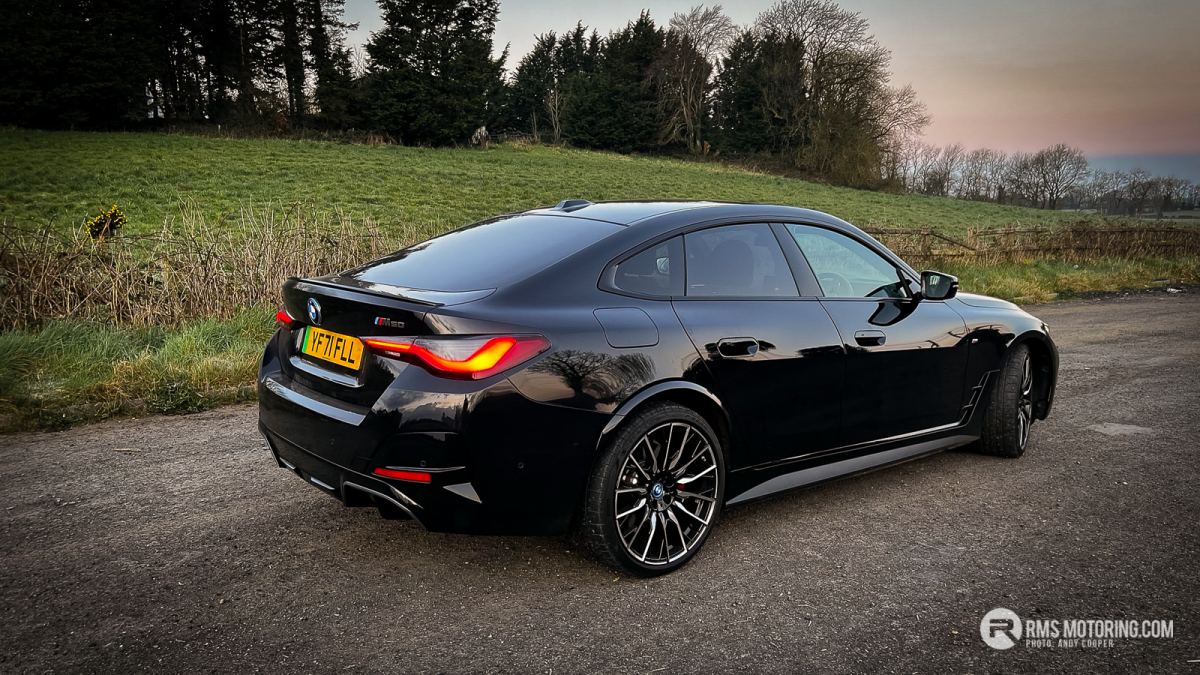 The Gran Coupé shape is practical with its five door layout and decently sized 470 litre boot, which is larger than the Tesla Model 3, but dwarfed by the significantly larger Y. Interior space in the front is good, with a comfortable driving position and a familiar cabin layout that bar the impressive curved display is lifted from the other 4s.

This of course is part of the BMW master plan with the i4. They’ve got the T-shirt with the revolutionary i3 and i8 which are now generations old, and were early adopter material, and so this car is the opposite being an EV that instead is a natural evolution from its closely related ICE siblings. Drive to your local BMW dealer (JKC in this case) in your 420i, and be driving home in an i4 knowing where 90% of the controls are, with the EV components so well packaged that the final 10% difference, is 90% better.

There is a level of premium feel to the cabin which the rivals such as the Mach-E and Ioniq 5 would struggle with, where material quality, seat support and driving position all being excellent in the M50. 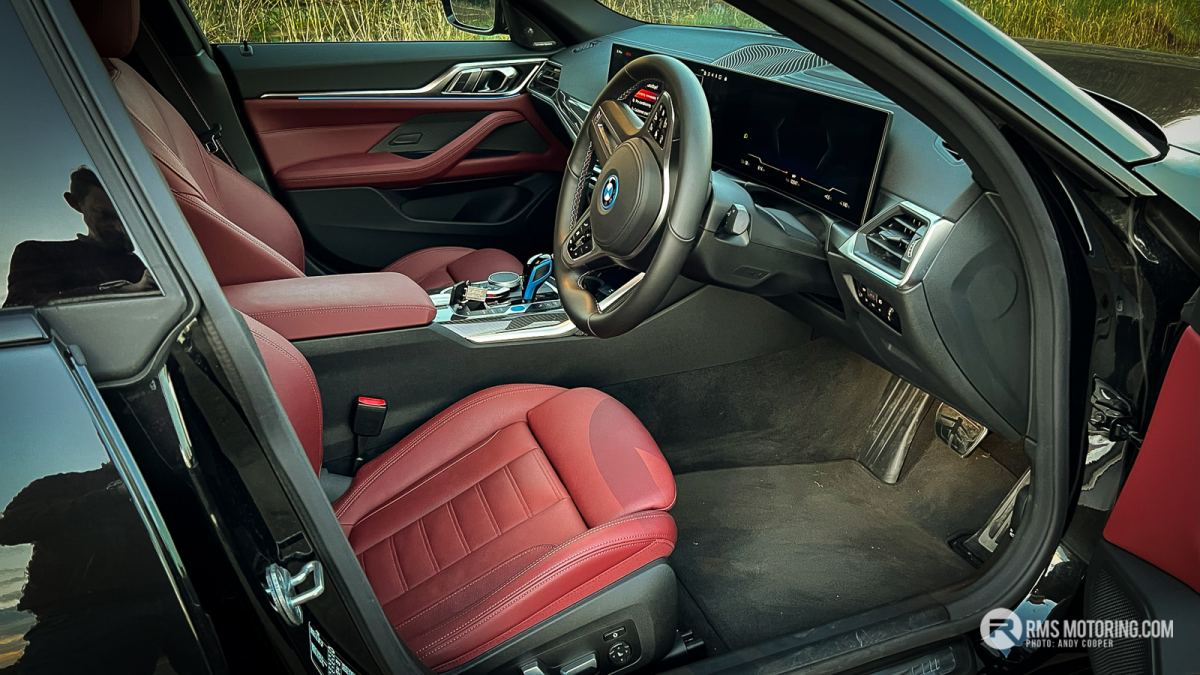 There’s a reasonable level of button count too, although even BMW have succumbed to removing useful physical buttons such as climate control and heated seats which are screen only. The iDrive is the same as any new generation that BMW have released, which is a case of ‘There’s a lot in here, but given a few days, and you’ll ace it’.

BMW are also known for their excellent heads up display. No different here with directions, speed and adaptive cruise notifications clear but yet not obtrusive. Useful when the scenery is hurtled towards you in a wave of torque and you need to keep eyes front and centre.

The interior in the front does suffer due to its ICE counterpart, so despite their being good storage, there doesn’t seem to be that feeling of airiness that you get with some other EVs where the centre console and floor space feels more open. 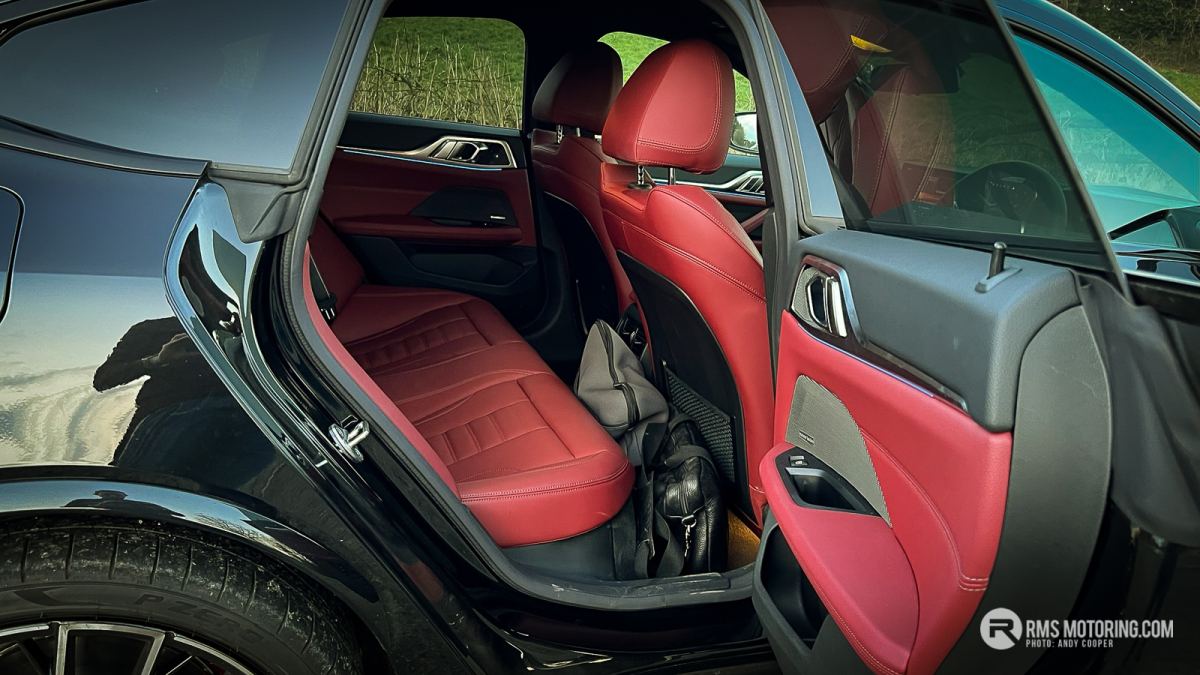 This is most prevalent in the rear, where the floor seem to sit high and the transmission tunnel remains restricting legroom further. There is decent headroom through despite lack of panoramic roof, another popular EV option. The M50 does have separate climate control in the rear, and USB-C ports here and up front along with a wireless charging pad in the centre console front. 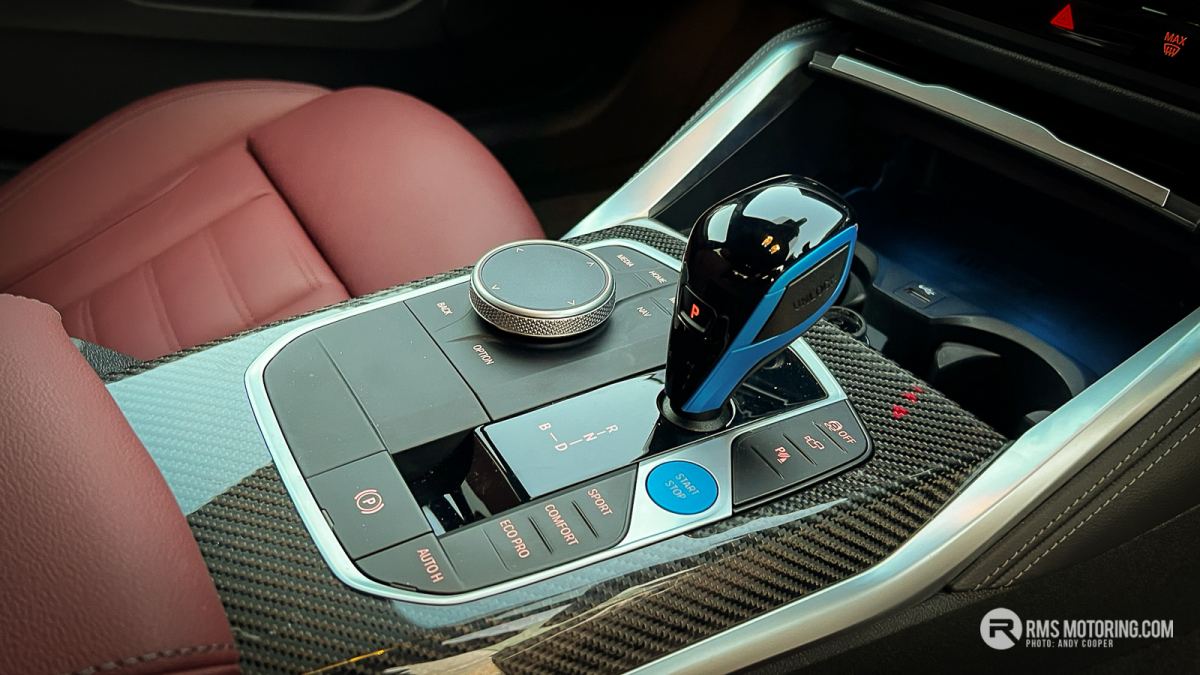 Out on the road, first impressions are good. As you would expect, this is a very easy car to live with, the transition from an ICE BMW to an EV is painless and exiting customers loyal to the marque will gravitate to this easy transition whilst considering taking the plunge for an EV.

Putting the M badge on an EV is a brave statement of intent by BMW. Giving an EV with circa two tonnes decent driving dynamics is a huge undertaking, with wildly different results from other manufacturers. However, the news is good. Where other EVs run out of suspension compliance on a B road, the BMW i4 M50 brings a level of composure. In fact on a B-road it is probably the most enjoyable EV I’ve driven to date.