If ever you needed a car to transport the family about in during the week, yet excite you when chasing a rally at the weekend, or maybe even partaking in a track day, Peugeot have the answer.

It comes in the most surprising of packages, too, as the base car for this exciting missile is the largest of their car fleet, the load-lugging 508. Available as either a saloon or estate, the latter of which could ingest a small country, this PSE (Peugeot Sport Engineered) model is nothing short of surprising.

It’s the perfect addition to the driveway of someone who had the French maker’s flagship hot-hatch, the 205 GTi, on their driveway in their youth. That someone now with two kids and a dog, who has matured in many ways, but is still a boy-racer at heart.

Unmistakable as to what it is, as the 508 PSE is most commonly seen finished in Selenium Grey as pictured on the model tested, with Nera Black and Pearlescent White being optional colours. The cars beefy styling is accentuated with aero canards on the front and rear bumpers as well as the side skirts, detailed with black and green livery. 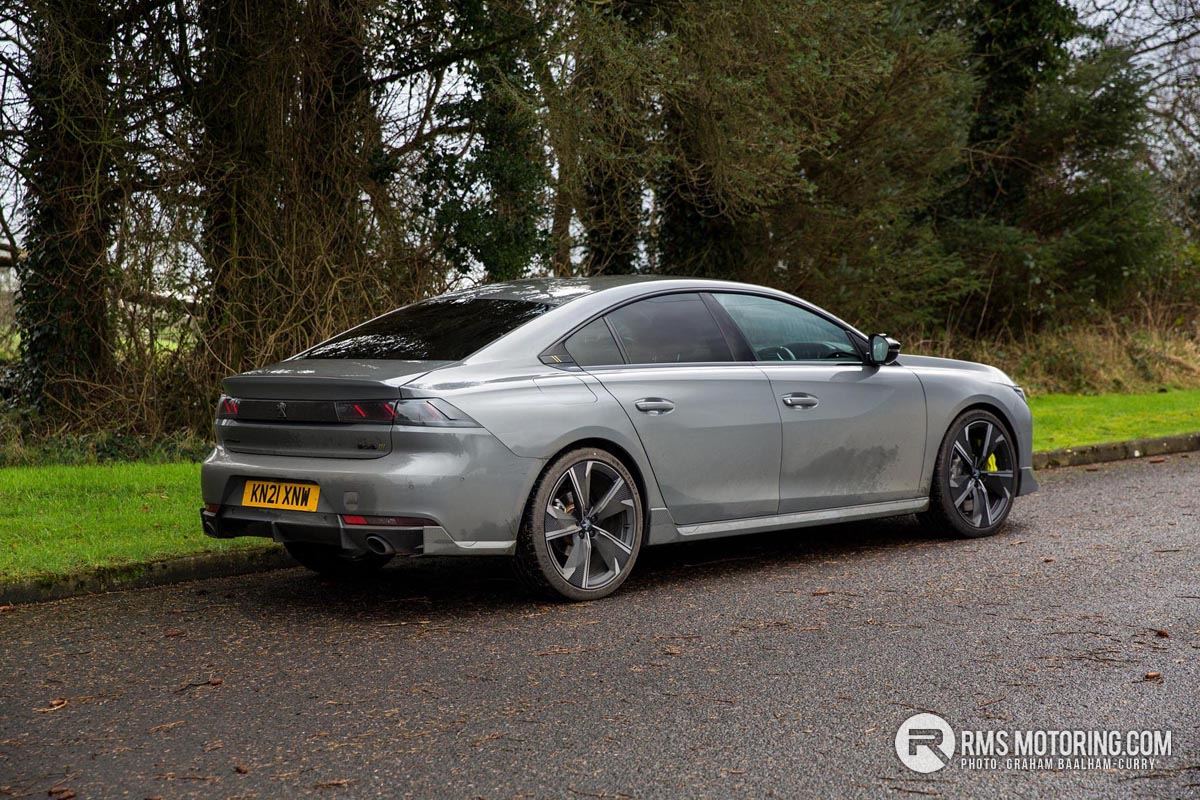 Behind the dark 20-inch alloy wheels, wrapped on this car in Michelin Pilot Sport 4’s tyres, are huge Alcon brakes in an almost day-glo green colour. Brakes that give some clue as to the true intent of this incredible car, which also features a wider track and adaptive suspension, encouraging it’s potential.

Underneath is where the party happens, though, as a mix of batteries, electric motors, driveshaft’s, an 8-speed automatic ‘box and a 1.6-litre turbocharged 4-cylinder engine provides a whopping 360hp with 520Nm of torque via all four wheels.

The traffic light dash to 62mph achievable in a mere 5.2 seconds with a top speed of 155mph and a combined economy of up to 138.9 mpg, this plug-in hybrid means business.

Priced from £54,030 the Peugeot 508 PSE is far from cheap, but when you price an Audi S4 or BMW M340i up to a similar specification to this tasty French fancy, they are all much of the same. The latter brace maybe little bland, in comparison.

On my way to Curtis Peugeot, Pennybridge Industrial Estate, Ballymena, I passed a car transporter that was headed to the same location. Upon this lorry was the very car you see pictured, and with just 8,000 miles from new, it’s a bargain at sub £42,000.

The timing of this car’s arrival could not have been more perfect, as I had travelled to this dealership to actually drive a Peugeot 508 hybrid estate car.

However, as an ageing petrolhead that struggles to get my brain around hybrids and an EV future, the good folk at Curtis Cars knew that giving me the keys to this Peugeot Sport Engineered model would be a sensible and educational choice.

I am glad they did, as no car with a 1.6-litre engine should go so well, and it provided proof to me that hybrid technology really is a force to be reckoned with.

Assuming you have suitable means to keep the EV battery topped up, which can even be achieved on a three-pin ‘granny lead’ in around 7 hours, you can expect something in the region of a real-world 20 miles of silent driving when doing mundane jobs such as the school run, the weekly shop, or even when stuck in traffic.

A full charge on a typical public charger takes less than 2 hours, and the claimed best economy stated earlier, couldn’t be further from the truth for those who do a decent commute. Sub 50 mpg is more realistic on said commute, whilst around 30 mpg can be expected when extracting the most from this vehicle. Neither of these figures is in anyway poor, I must add, considering the performance that the 508 PSE offers. 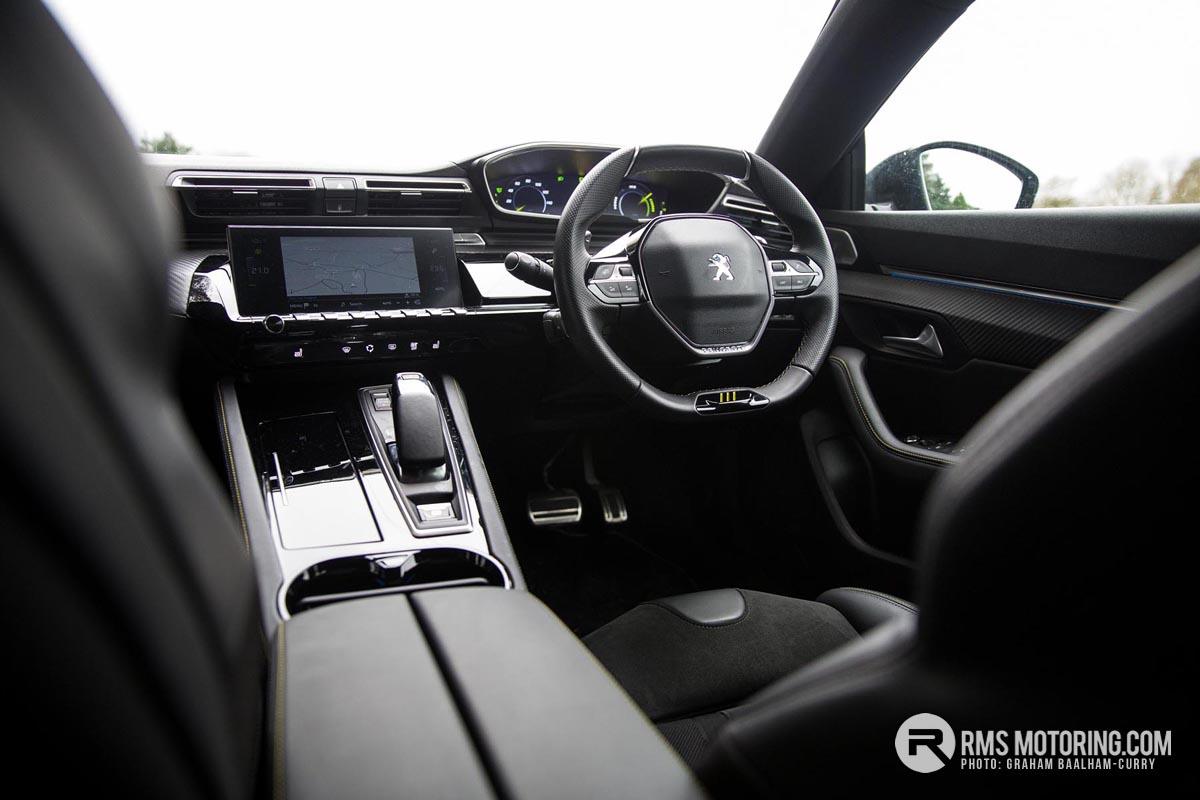 Peugeot’s i-Cockpit is the main feature inside, offering absolutely everything you need, and then some. Its tiny steering wheel doesn’t take long to get used to. Neither do the massaging sports seats, which sit lower to the ground than a normal 508, offering a much sportier driving position.

A mixture of leather and Alcantara feature throughout the interior which, combined with the PSE specific day-glo green stitching, it really is a pleasant place to be.

Home of the infotainment system is a 10-inch touchscreen, while the speedometer cluster is a 12.3-inch screen, all of which can be set up to display hat you feel is most essential. Navigation, front and rear cameras, MirrorLink for compatible phones, and a FOCAL premium sound system add a great deal of convenience and quality.

Safety is of great importance and the DRIVE ASSIST PLUS technology on the 508 PSE automatically adapts the vehicles speed to that of the one in front, to maintain a constant distance and helps maintain the lane position children by the driver.

A total of five driving modes are available; ELECTRIC, offers as you would expect, a full EV experience; 4WD, gives you confidence no matter the terrain; SPORT, affords you the best driving experience of this vehicle, utilising petrol and electric technology in harmony; HYBRID, offers ideal efficiency for daily driving; COMFORT; offers the same as hybrid but with grater suspension flexibility.

Regenerative braking allows the battery to recharge thanks to the i-BOOSTER system. You can also control and plan your charging directly from your Smartphone, thanks to the MYPEUGEOT remote management app.

Being the most powerful production car Peugeot has ever made, it’s reasonably potent turbocharged petrol engine is bolstered by a front and rear electric motor, meaning that even in electric only mode it drives and performs better than most plug-in hybrid vehicles.

Best enjoyed in SPORT mode, extracting the best of both fuel types for the ultimate experience, I guarantee most adults will chuckle like children on a fairground ride at the unsuspecting haste and agility of the 508PSE.

I know I did. Several times, during the couple of hours I spent with it.

Adaptive suspension dampers combined with a wider track improve greatly what is already a fantastic chassis. It is probably the only car I have driven to date, that you can’t feel in the way it drives, that it’s carrying extra weight thanks to its additional battery and electric motors.

If, like me, you’re not a brand snob, and if, like me, you enjoy a run out for a pint of milk that would make the hairs on the back of your neck stand, then the 508 PSE could well be for you.

The saloon model tested, which is actually a hatchback, looks great. However, the estate (SW) version is where my money would be going as it not only looks much better, but offers greater practicality too.

I should note that the car tested was presented to me in immaculate condition and the fact that it is so dirty in my imagery is that I was enjoying driving it too much to stop and photograph it whilst it was clean.