You are at:Home»Sprint»Adrian reigns supreme again at Nutts Corner Final Run Show Down
By Graham Baalham-Curry on September 23, 2020
Tweet

Saturday 19 September saw the now fourth round of the SW Adair Tyres Northern Ireland Sprint Championship take place at Nutts Corner Circuit. The event was hosted by North Ulster Car Club who as usual hosted a superb day and even managed to recruit a Minister to put in a good word with his boss and secure them weather that we simply are not used to at this venue.

As the sun split the trees the action proved to be even hotter than the air temperature as everyone was itching to get back on track and blow off some cobwebs, socially distanced cobwebs I hasten to add.

As well as the usual drivers briefing it was superb to see the entire paddock wishing long term Championship timekeeper Pat McAleer a very happy 90th birthday. After spending the morning setting up the events timekeeping equipment Pat was presented with a championship coat by Championship Co- Ordinator David Evans, on behalf of all the championship competitors, officials, marshals and supporters. Pat then wore the coat all day as he performed timekeeping duties before helping with the packing up at the end of the event. This is tough going for any man, let alone a man of 90 years of age!! Congratulations and Happy Birthday Pat. 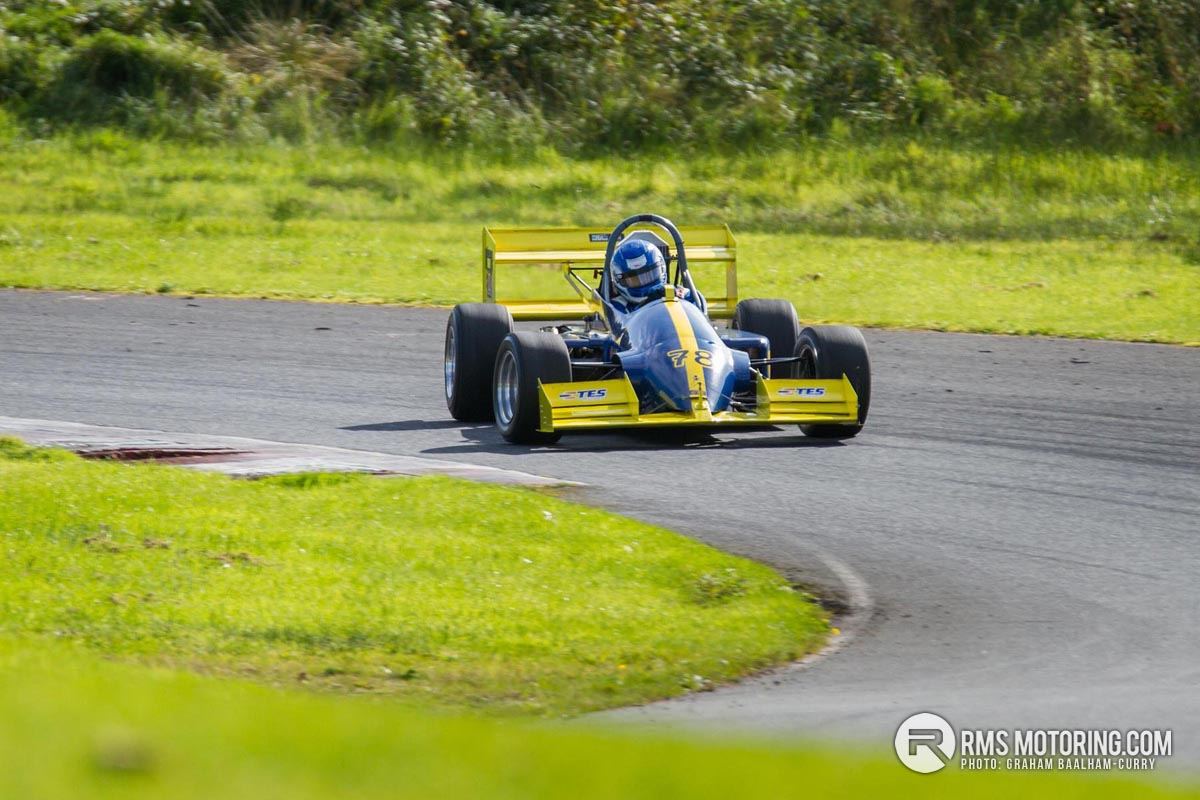 With a bumper entry of 95 Starters the first timed run commenced around 1130am and the action was hot and heavy from the off. Steven Gault hit the ground running in his Reynard 903 and lead after the first run by a mere 0.46secs from Adrian Pollock with Alan Cassells third. Previous sprint and Hillclimb Champion Simon Woodside made a welcome return in his Pilbeam MP82 and was fifth behind Mr Carncastle himself Graham Thompson. Indeed after the first runs 9 cars were under the magic 100 second mark which was impressive!

Further down the time sheets there were battles galore as returnee Jim Hutchinson took 4.22 secs out of the class 7 record and still was complaining that he should be faster!! He blamed the lack of an anti roll bar and new Pirelli tyres for giving him under steer where he really didn’t need it. 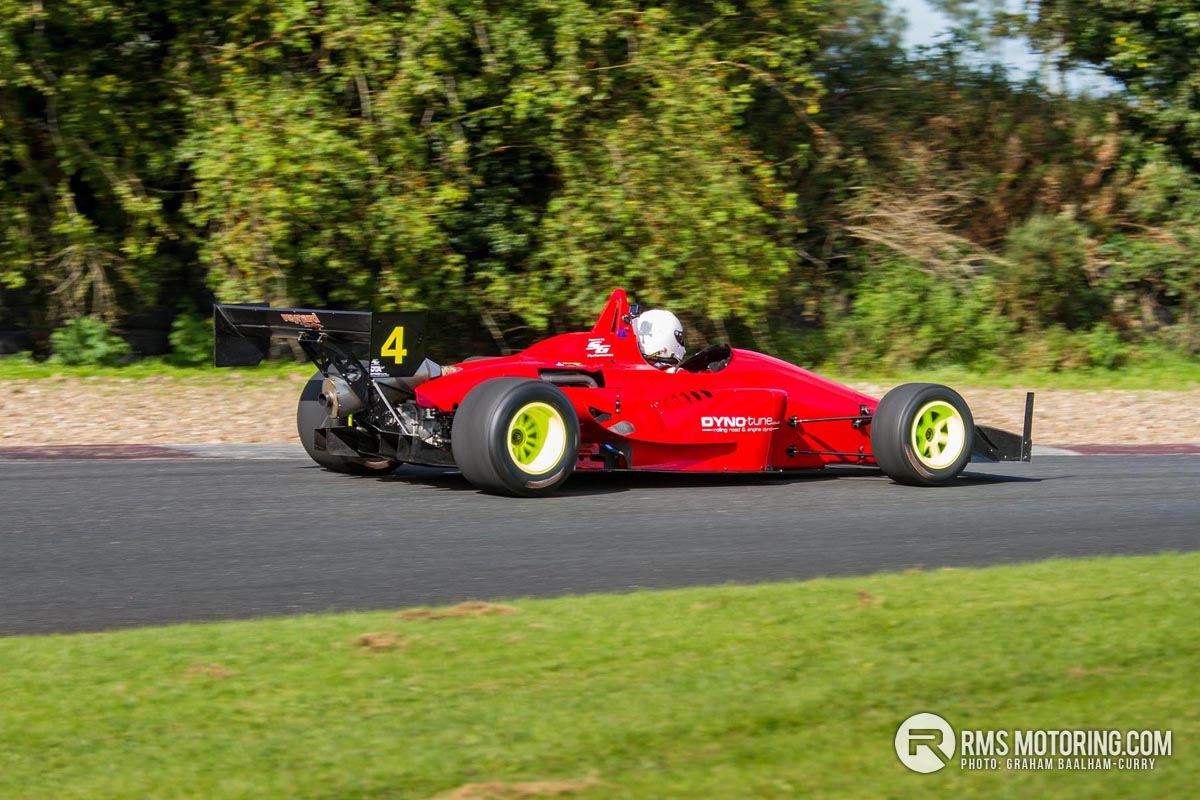 Jim didn’t quite word it that way but that’s the printable version. In class 6a the 205 battle was hot and heavy with David Evans a mere 0.76secs behind Jonathan Strain and David was adamant that he was catching Johnny!! Throughout the David did manage to get under Jonathans first time however Jonathan also managed to lower this time and Jonathan took class honours and retained bragging rights in class 6a.

In Class 16a there were 3 minis battling out for class honours with Bill Blair and Richard Beattie fighting closely all day. There was also an astounding 9 big single seaters in class 15 and 5 in class 14 which was great to see as lately there haven’t been as many single seaters out competing. 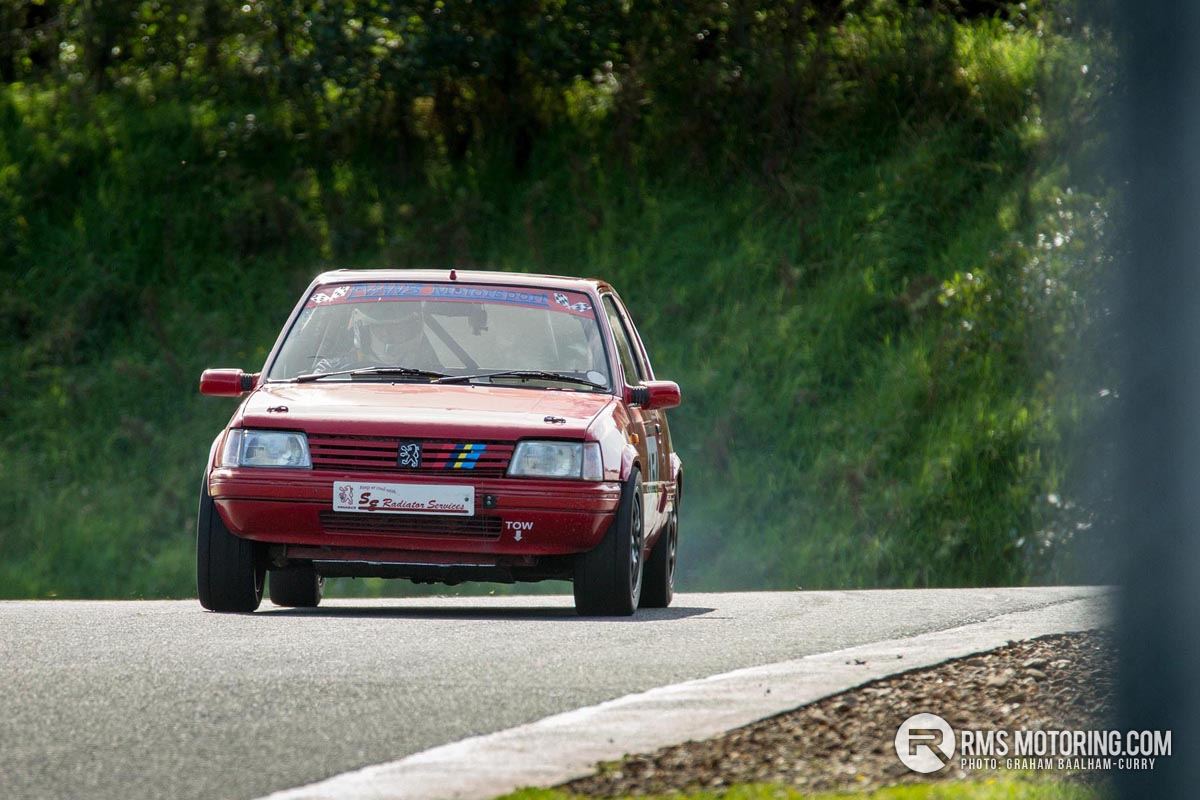 Hopefully these numbers will increase again with rumours that the Morgan’s were doing some testing in their Pilbeam last week in advance of a long overdue return to the sport, and then Graham Thompson dusting his GTR Turbo down after Garron Point Hillclimb and doing some sprinting as well. Great also to see Christopher Houston make a return along with Trevor Roberts who finally had a good clean day after some niggling issues of late.

In terms of the Road going battle Andrew Robb again showed everyone why he is boss of the road going category with a fabulous 117.18 run which hr then dropped again to 114.84secs. Conor Hamill was second in the category in his BMW M3 V8 2.45secs behind Andrew and 2.51secs ahead of third placed Tom Lawther in his incredible Rover SD1. Andrew now has a 9 point lead in the road going category from Conor Hamill. 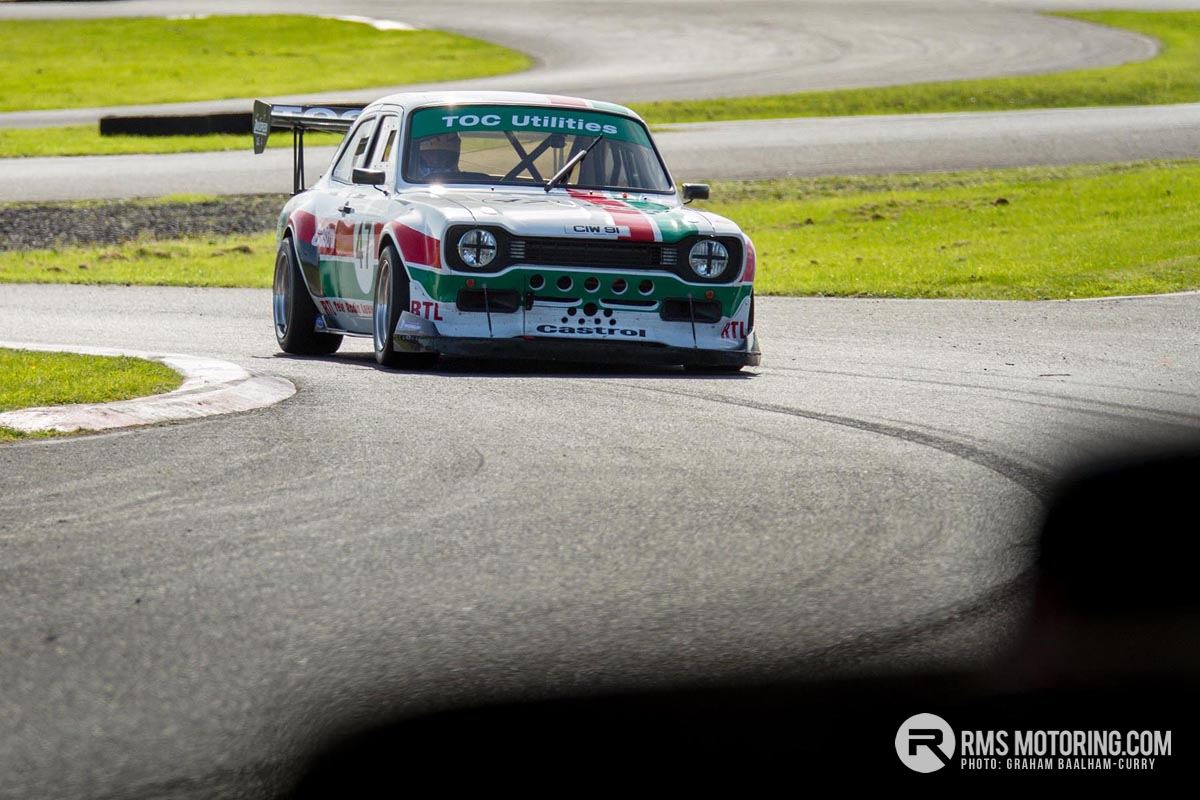 In the modified Battle Oliver Cormican took maximum points despite being piped on the day by Martin Cairns. Daniel Campbell took the honours of second modified car with Coleraine’s Steven Nevin third in his mark 1 Escort. Olivers drive was very impressive when you consider he is driving a VW polo with Mitsubushi EVO running gear and Martin Cairns is in a WRC Fiesta and Oliver has only driven his polo twice in anger. The modified championship mirrors today’s finishing order.

Jim Hutchinson took maximum Specialist category points in his Westfield GM with Gerard OConnell second and Graham Boyce third. Sadly Gerard only managed to complete 1 timed run as his clutch gave up in the paddock as he stopped beside his motorhome after completing his run. 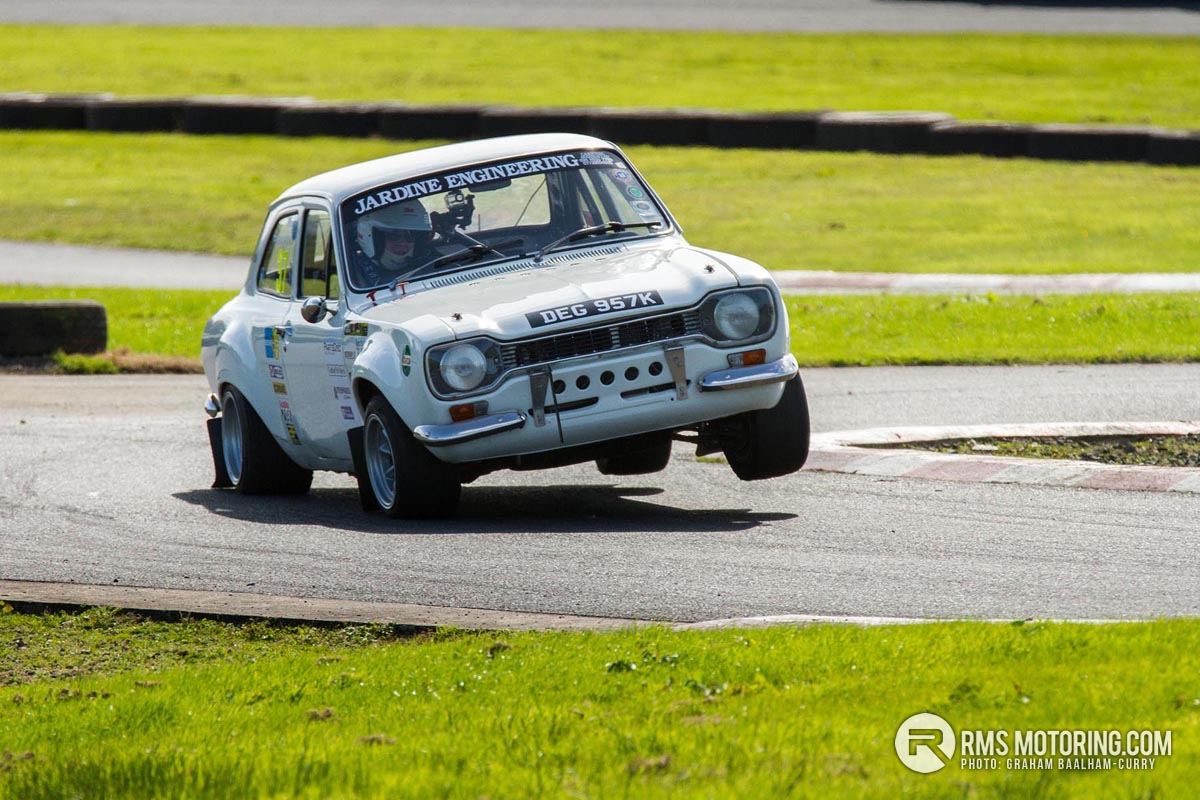 It’s also great to see Graham Boyce returning to the championship after his year out. His engine rebuild has proved to be very successful as Graham has hit the ground running on his return. Gerard now ties at the top of the specialist category championship with David Hawthorne and Jim Hutchinson is third. This category will go down to the wire.

In the ladies award Emma Campbell still leads by 2 points after her and Sheryl McBride both took an 8 point, points haul, on Saturday. This Award is going to go down to the wire and dropped scores will definitely be a deciding factor at season end.

In terms of the fastest mini in the west that honour went to Karl Johnston with Gary Milligan second and Gerry McGarrity third. In fairness the 3 minis were, at the end of the day, only separated by 0.53secs after 3 runs, so the action was close and tight. Karl Johnston was rumoured to have removed not only his rear brake light wire, but also the bulbs and perhaps that’s how he managed to nip the win from Gary and Gerry. 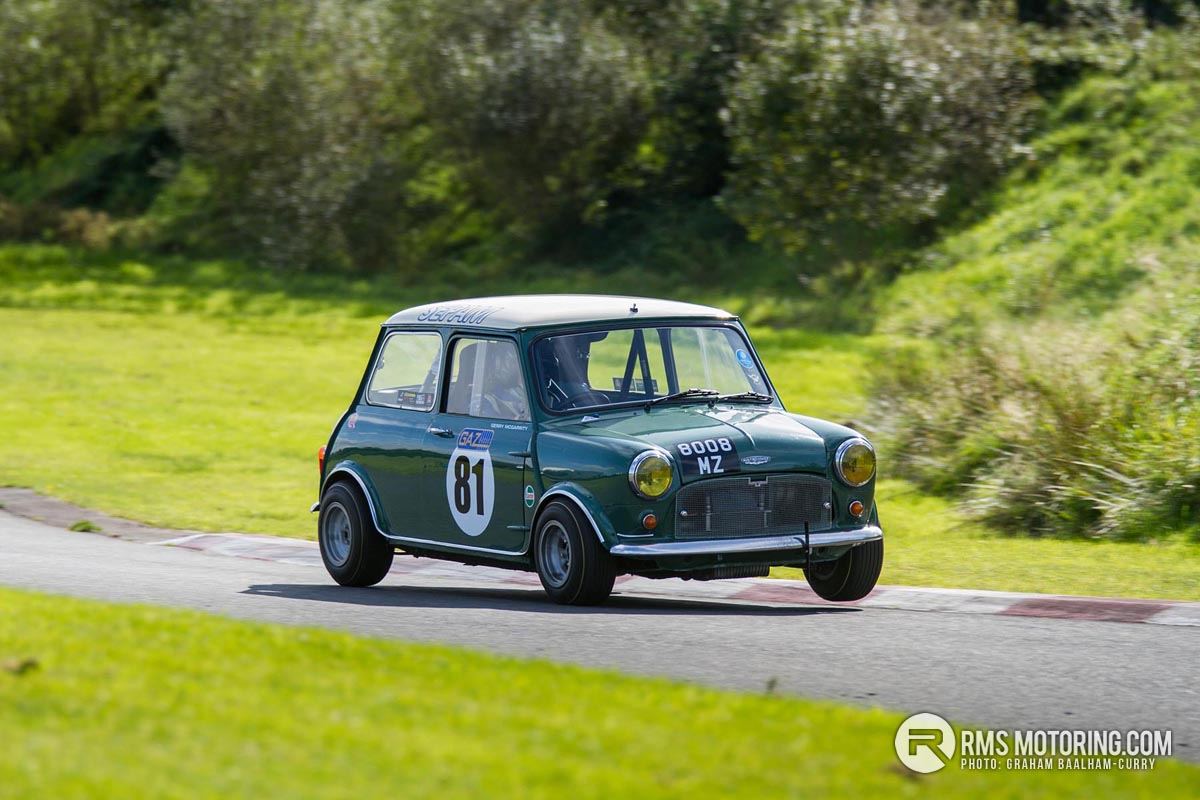 Anyway that’s 1 conversation I’m more than happy to start and then run from as I`m sure there will be a lot of friendly banter over that one amongst the 3 mini men.

Back now to the overall results and going into the last run it was all to play for. Steven Gault lead the way with a fabulous 91.88 sec run with Alan Cassells second and Adrian Pollock third. Adrian, as usual, did whatever Adrian does whenever he needs to find time and he took a blinding last run of 91.59 secs. Adrian however couldn’t celebrate as he, like the rest of the paddock stood and watched Alan Cassells try his best to take the win. Alan also went faster but sadly was only fast enough to take third on the day with a 92.13 sec run which was 1.08secs ahead of 4th placed Simon Woodside. 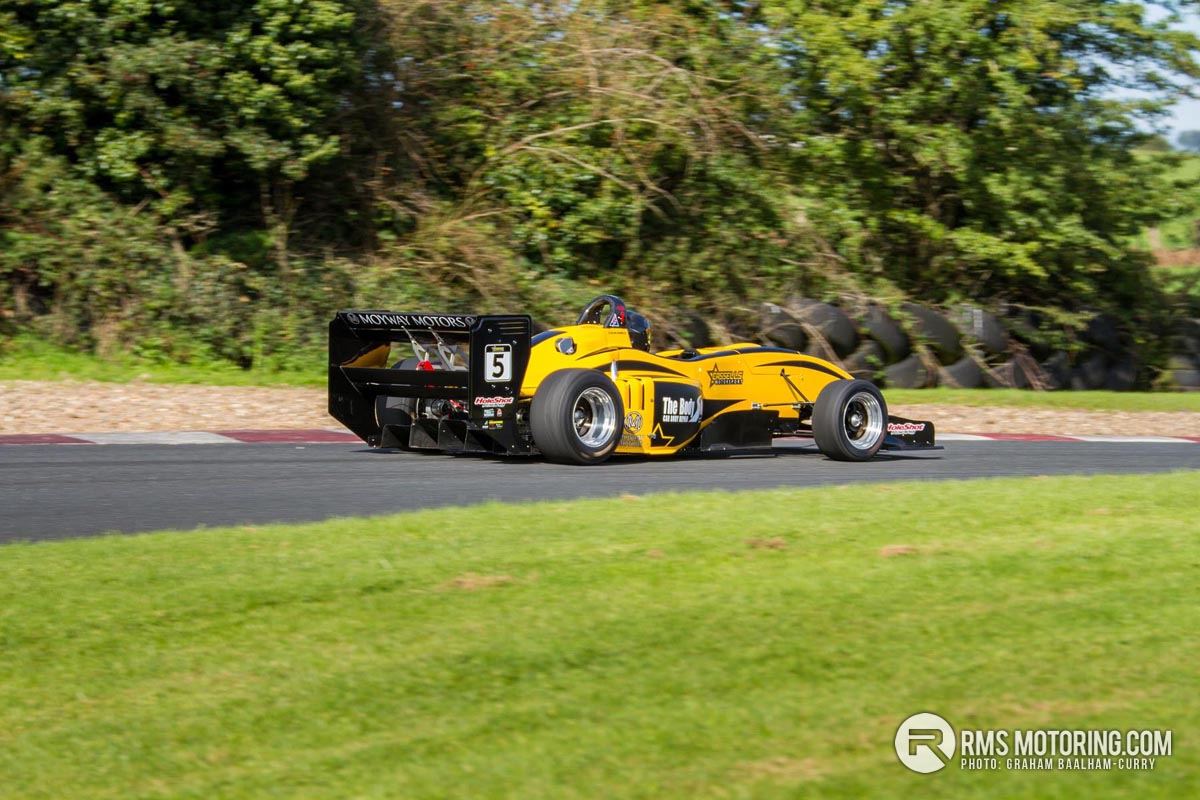 At the end of the Day Adrian took the win from Steven Gault, with Alan Cassells third and Simon Woodside fourth.

The next event is scheduled for 10 October at Kirkistown and will be hosted by the Ulster Automobile Club. As with other events to date this event will be held behind closed doors due to the current covid restrictions in place.