In a segment that is absolutely booming, SUV’s or crossover’s or whatever you wish to call them, have never been as popular on our roads and Mazda have updated their baby.

Since launch in 2015, the Japanese maker, towards the end of last year (2018 that is, Happy New Year) took its CX-3 and redefined it, aligning it with what some rivals offer and putting it ahead in some areas, compared to others.

Starting at a fiver less than £19,000 the CX-3 sits a little more expensive than the Vauxhall Crossland-X, yet a little more affordable than the 2008 from Peugeot, with the latter being a more realistic rival in regards to equipment and overall quality.

With sharp styling and extra ground clearance, the CX-3 is a very sexy car and will appeal to a vast array of people and indeed is one of the nicest looking crossovers available compared to the likes of the Mini Countryman and Nissan Juke. 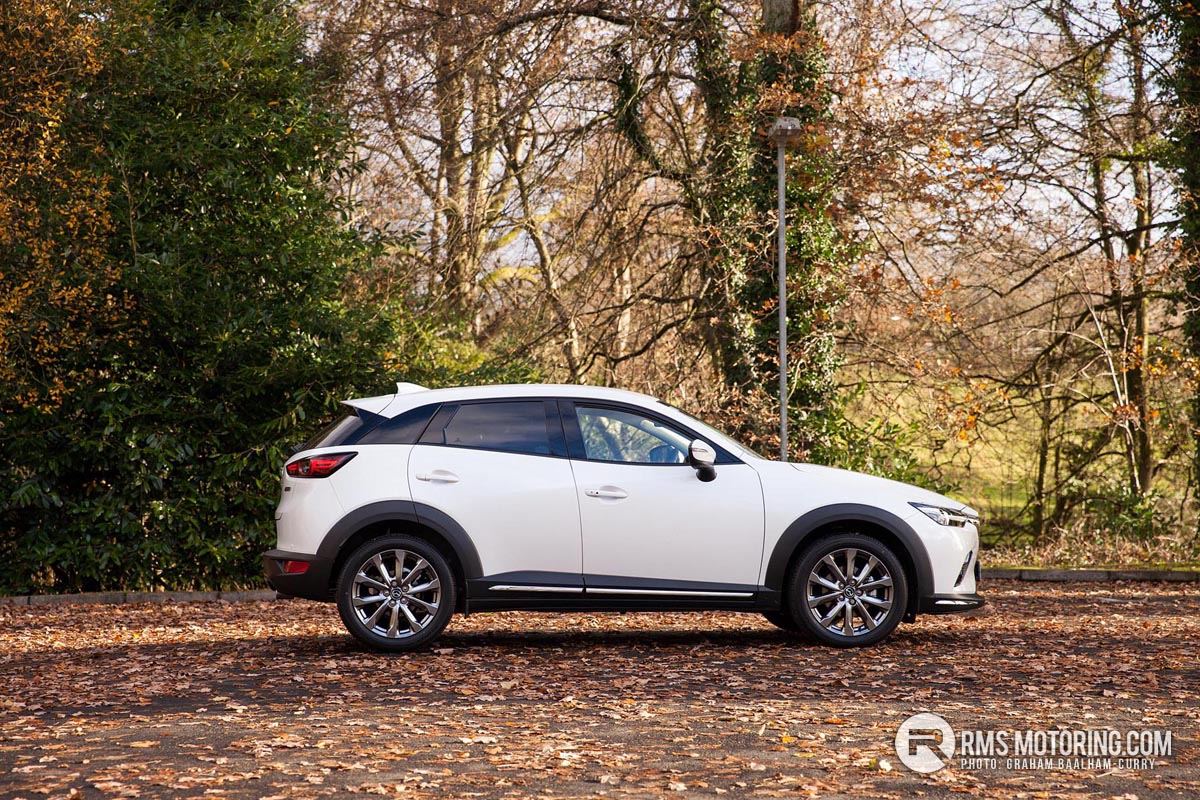 As with all the Mazda range, high specification comes as standard with a huge amount of quality throughout the car and this, combined with their SkyActiv technology which includes keeping the cars light in weight as well as increased engine efficiency, makes the CX-3 an attractive package.

Alongside a simplified model line-up which includes a host of technology and interior improvements, the CX-3 has benefited from a revised front grill and the option of ‘Soul Red Crystal’ paintwork, a signature colour of Mazda. Now more comfortable than ever before, thanks to better seat cushioning, rear passengers now have a central armrest with cup holders.

With added comfort and quality inside, it is no surprise that Mazda have added extra sound deadening in the roof and doors, further enhancing the appeal of those seeking quality. Driver engagement is paramount with improvements across the chassis for enhanced handling and improved ride comfort.

Ditching their 1.5L turbocharged diesel engine in favour of an all-new 1.8L turbocharged diesel power-train, Mazda deliver class-leading performance and economy. Producing 115PS, this sole diesel offering, equipped only with a 6-speed manual gearbox and front-wheel-drive, will see 0-60mph in 9.9 seconds and a top speed of 144mph with a combined claimed economy of 64mpg.

A single petrol engine is available, with two power outputs and either a 6-speed manual, or 6-speed automatic ‘box. Starting with 121PS available only with front-wheel-drive, you can expect 0-60mph in 9 seconds, a top speed of 119mph and a claimed return of 45mpg.

Finally, the 150PS version is only available with all-wheel-drive and on the top trim level, expect a return of 40mpg on this engine with a top speed of 124mph and a 0-60 mph sprint in 8.8 seconds.

Three models are available starting from £18,995 with the ‘SE Nav’ which gets you air conditioning, cruise control, full electric windows, 16-inch alloy wheels, dual exit exhaust and inside, a leather gear knob and steering wheel with adjustable boot floor. 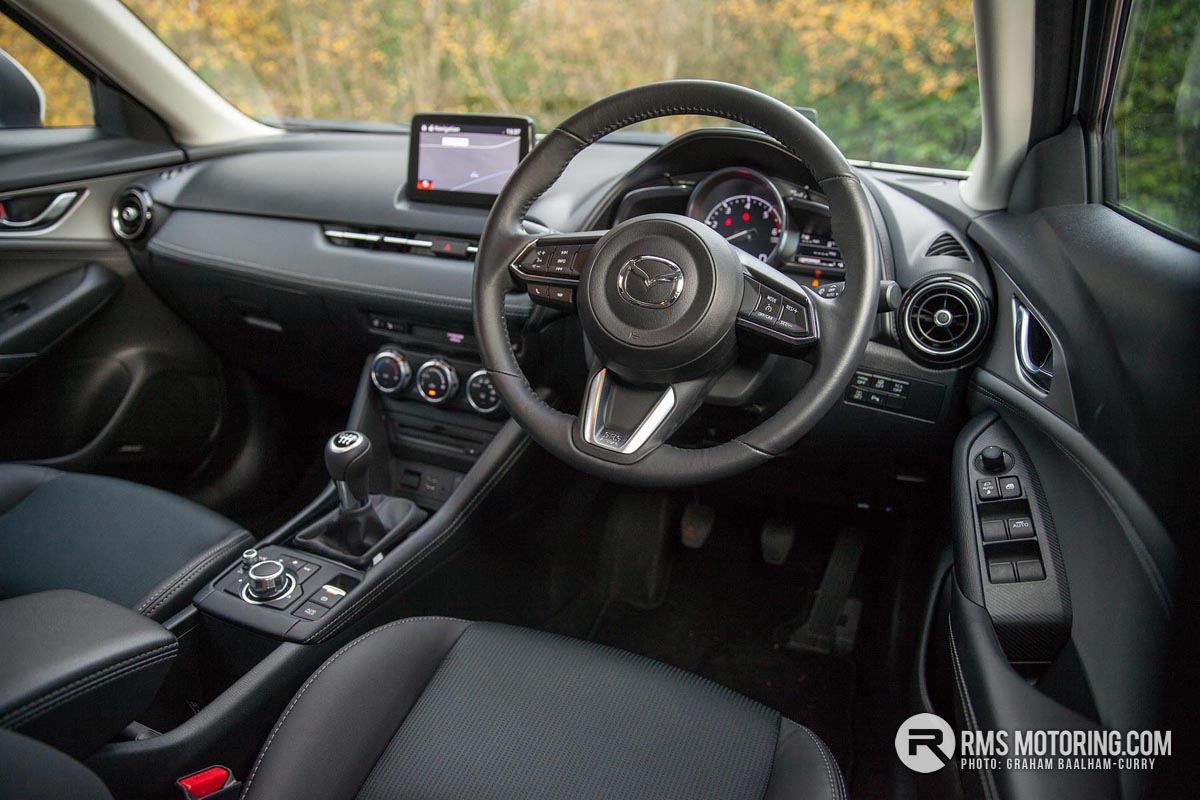 A 7-inch colour touch-screen is the home of Bluetooth, AM/FM/DAB radio, 2x USB and AUX input, sat-nav and phone connectivity via Aha and Stitcher apps. Next in the line-up and from £20,395 is an ‘SE-L Nav’ which adds climate control, heated front seats, rear privacy glass, auto lights and wipers, rear parking sensors, LED front fog lamps and lane departure warning as well as smart city braking.

Handling wise the CX-3 is as expected, firm enough with the 18” wheels on the test car but not back breaking and with a little body roll it absorbed fast meandering roads without even thinking and it definitely rewarded a slightly spirited drive which was a shock for a crossover. 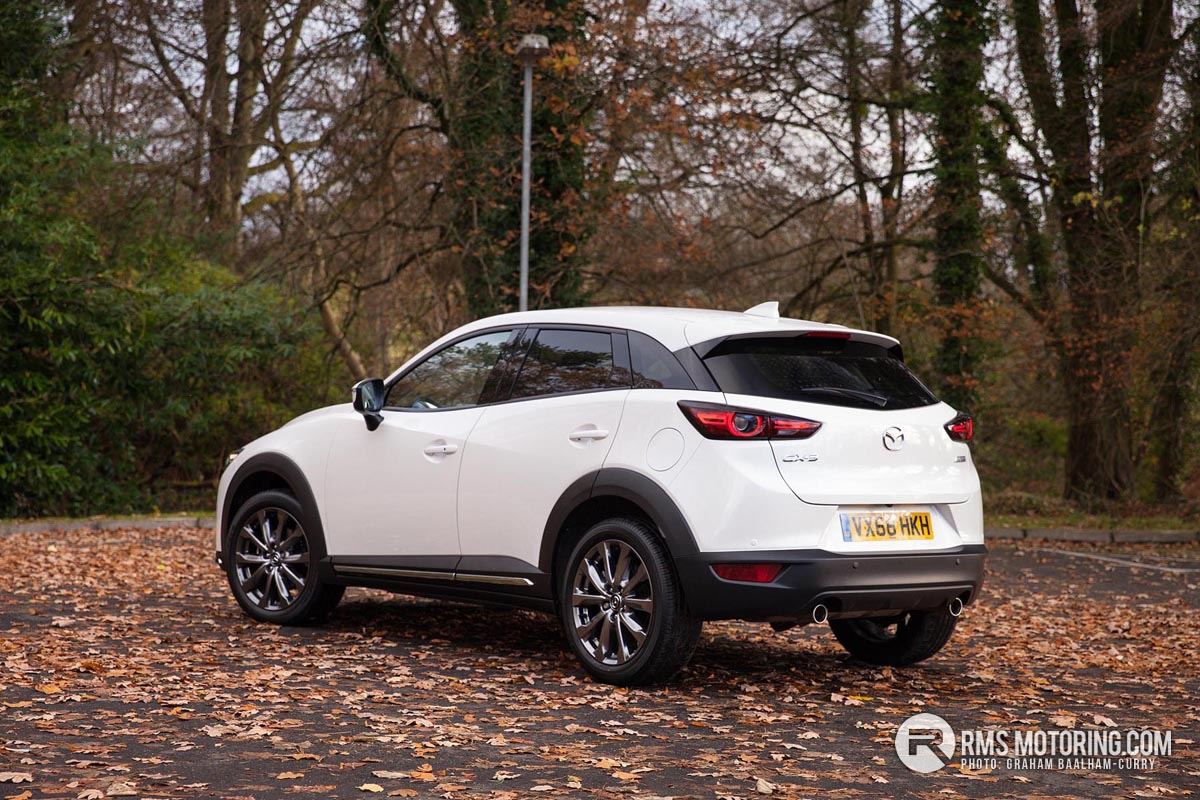 Luggage space in the boot is better than some in the category, however for a young family or active couple, it will likely prove too small with a squeeze required for a week’s shopping. The interior of this Sport Nav model is pleasant with a half leatherette trim accentuated with white stitching.

Even the door cards and dash board have a splattering of white stitching to complete the luxury feel throughout the cabin with the front seats being heated (very well too I must add), it really is a nice place to be.

The seats are comfortable with plenty of bolster support, being a crossover it would be a little cramped inside with four adults but there is the CX-5 for those who need huge space for long journeys.

Having spent a little time with the new diesel engine, I’ll admit, it offers just what it says on the tin, a tad more than 110bhp along with refinement and economy. Perfect for those doing big miles but I imagine the petrol versions to be much more popular.