You are at:Home»Drifting»Irish Drift Championship Round 3: Global Warfare
By Graham Baalham-Curry on July 4, 2017
Tweet

A hurricane hit Mondello Park at the weekend, rocking the very heart of Ireland’s number one motorsport venue. But this wasn’t due to the forces of nature at play; this was the high-velocity vortex created by the coming together of the world’s biggest drifting super powers, who had decided to create an unprecedented global match up. Huge crowds filled the stands and thronged the track, ready for the Irish Drift Championship Round 3: Global Warfare! 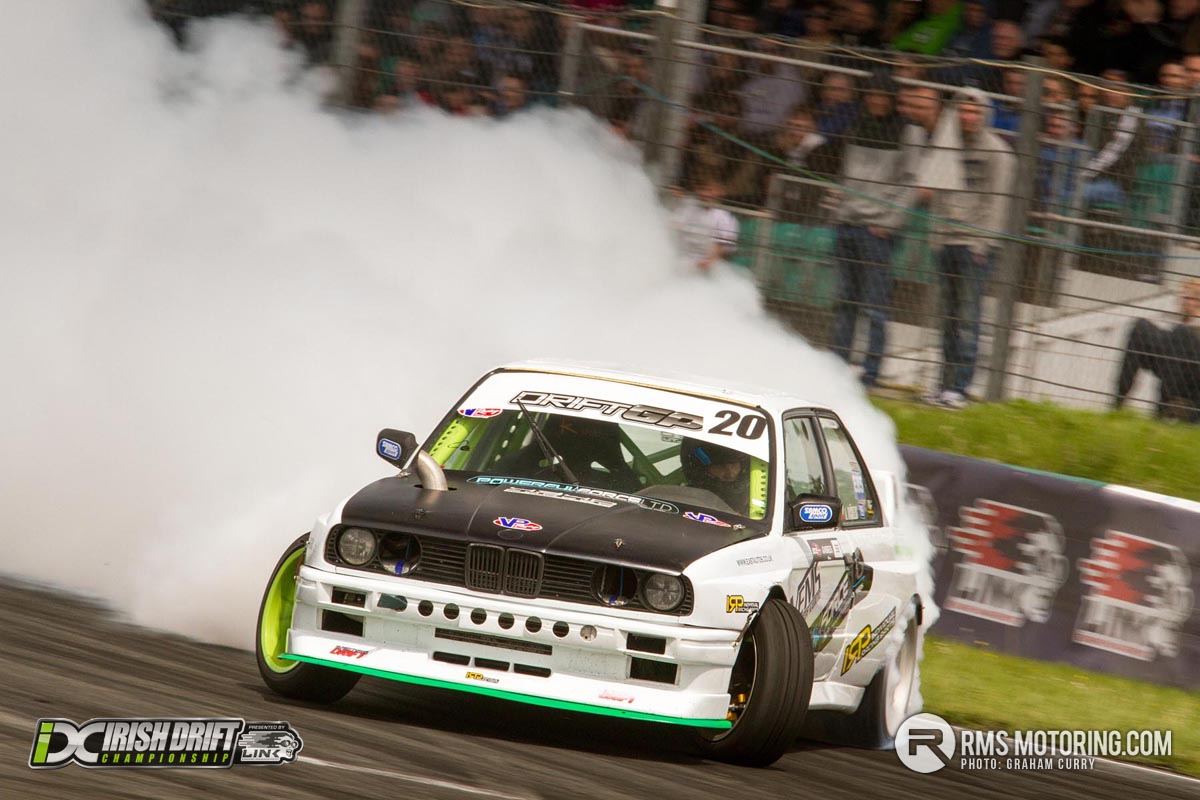 The list of contenders contained the best drifters from Ireland, the best from Europe and the best that the World had to offer. The organisers of the Irish series managed to convince Formula Drift Round 1 runner-up, Alex Heilbrunn to come over from his native Peru to take on the latest batch of rising homespun heroes.

They also managed to attract Enver Haskasap all the way from Cyprus, Andrius Vasiliauskas from Lithuania, Dutch driving ace Sebastian Fontijn as well as current Finish champion Juha Pöytälaakso with 1000bhp on tap in his E92 BMW. Steve Will travelled across the Irish Sea with his turbocharged E36 BMW and was joined by the hard-charging Welshman Oliver Evans in a Nissan S14a. Whilst the furthest travelled award went to Mitch Larner all the way from Australia to compete in Ireland.

As ever, the Irish Drift Championship attracts a strong northern contingent including sideways veteran Paul Conlan, engine builder Richard Bradley, Joe Doyle and current Irish Champ Duane McKeever from the mid-Ulster hotbed of drifting. And it was hard not to forget history maker – Mark McBurney from Broughshane, in his first year of pro competition. 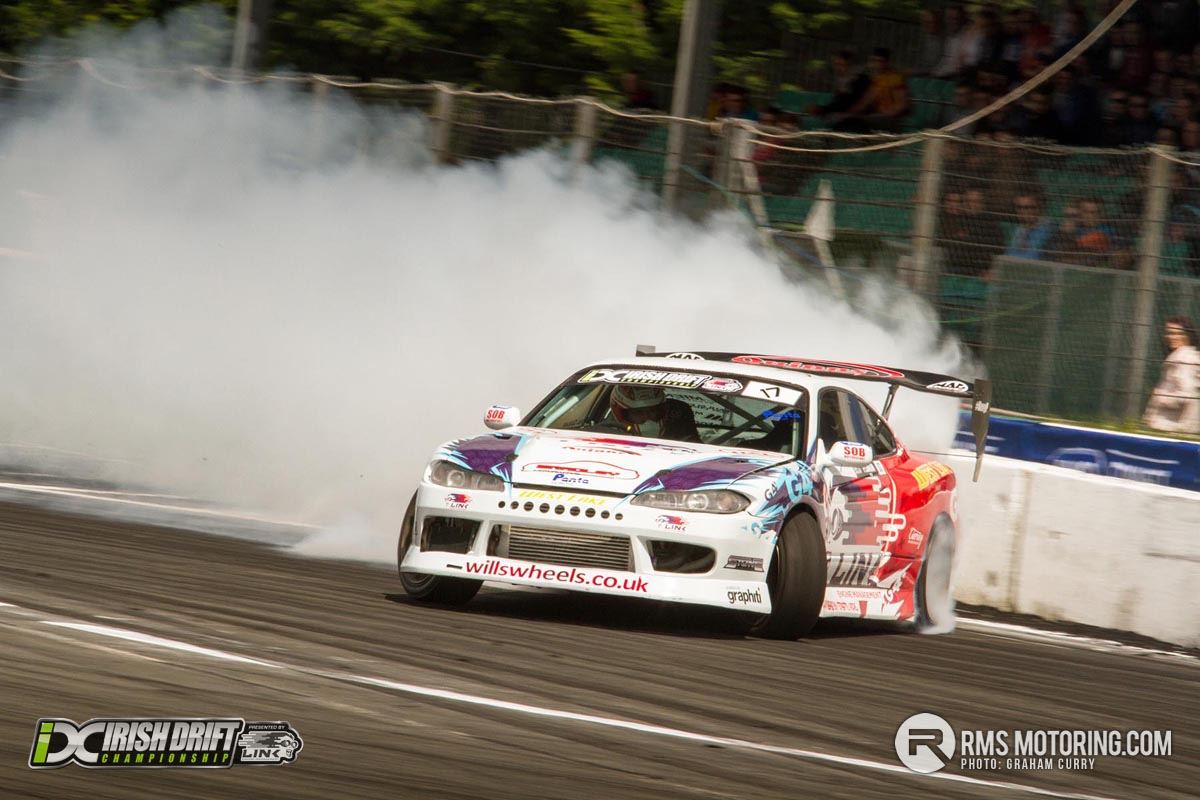 With a brand new track layout for this event, it was impossible to predict the podium as everyone on the grid left the start-line with absolutely no experience on the course provided other than practice over the previous days. This course was designed on purpose by the organisers to make sure no-one had an unfair advantage heading into battle.

After laying some new tarmac pre-event, the new track took advantage of the sweeping curves of the Mondello International race circuit, with three devilishly placed concrete walls for good measure and a total of 13, yes 13 clipping points. Enough to be unlucky to some during the day. 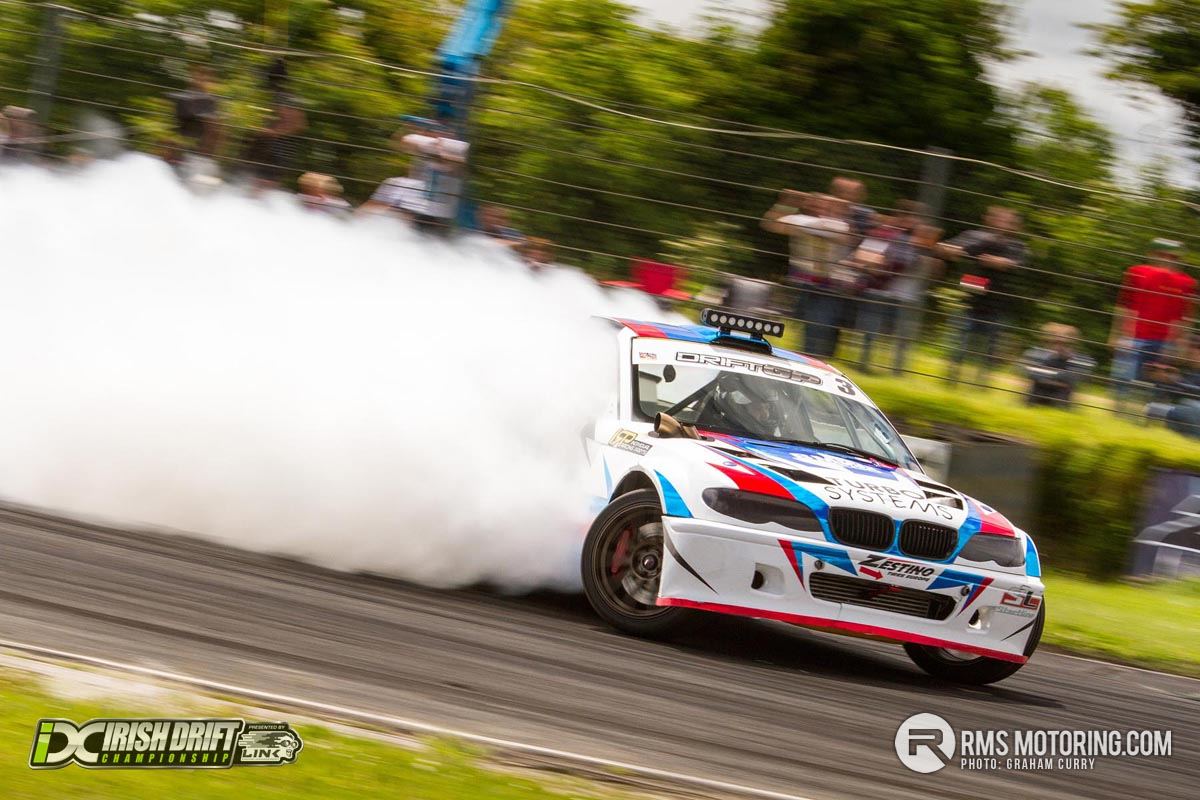 Post-qualifying, fans got the chance to see the rubber coated tarmac close up and meet the sideways gladiators in the Kildare cauldron. A few moments later, the track was cleared and it was straight into battle with Duane McKeever progressing easily after a spin from Sean Galvin on the second run.

Nigel Colfer was up next against the UK’s Ollie Evans but with a lack of oil pressure and an engine about to expire Colfer gave it everything though it was advantage Evans going into the second run and it wasn’t to be for Colfer as he backed out mid run. 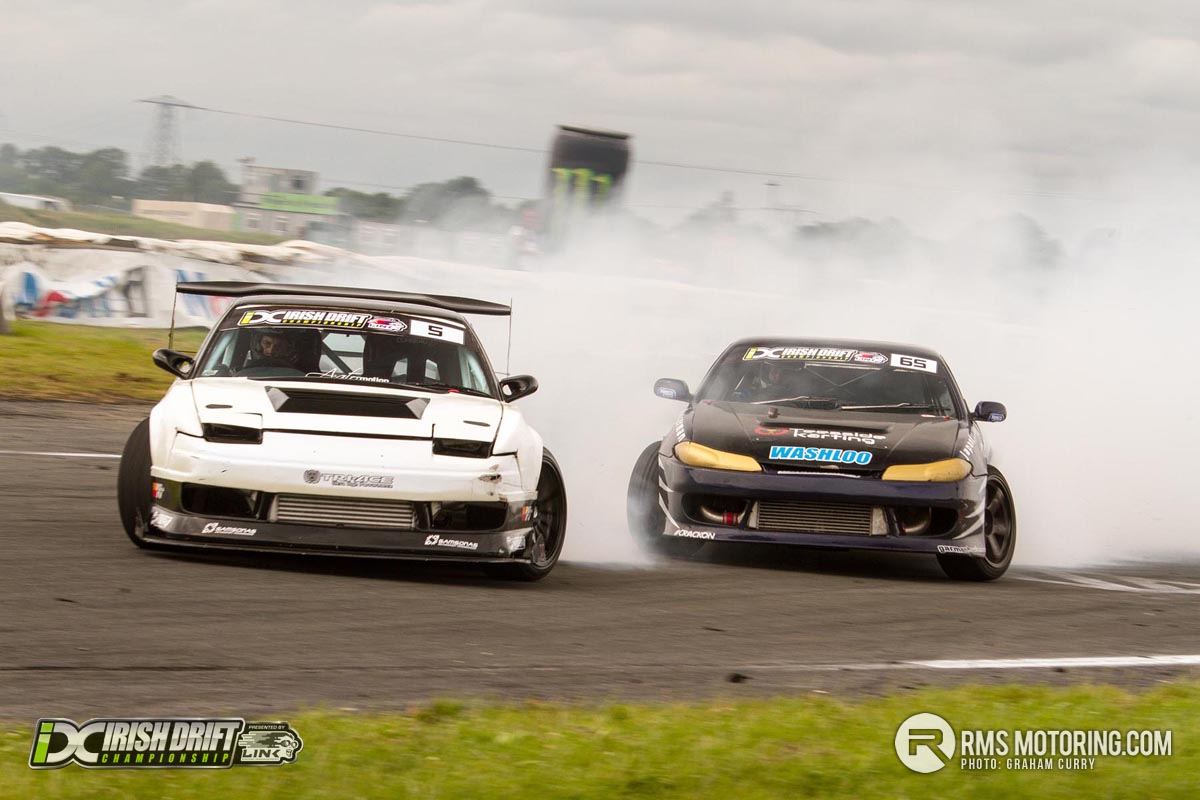 Australia’s Mitch Larner now faced Cypriot Enver Haskasap and after a tight first run, a few mistakes from Larner on the second run allowed Haskasap to progress whilst Peden Nelson progressed easily due to Keilan Woods’ car having a mechanical failure on the start line.

Paul Conlan gained an advantage over current IDC Championship Leader Jack Shanahan on the first run but a hard charging Shanahan progressed after a very tight second run. Alex Heilbrunn would be forgiven for thinking he was sure to progress into the top 16 against Charlie Geary but it wasn’t to be. Despite having to tackle the Formula D contender in his trusty but underpowered in his E36 estate, Chuck G took an advantage into the second run. After a spin from Alex at Mobil 1 corner, it was Geary to progress. Frenchman Jerome Vassia couldn’t do anything to stop the wrath of Richard Bradley who took a convincing win in battle.

Tomas Kiely got T-Boned by Steve Will at Mobil 1 bend. Taking an easy victory. A spin by Joe Doyle on the first run was enough to let Norwegian Fredrik Øksnevad progress. Doyle put everything on the line in a monumental chase run but couldn’t pull the advantage back.

Aurimas Vaškelis from Lithuania in his brutal E30 BMW faced Bas Mul from Holland. After a tight fought encounter it was the Lithuanian who would proceed. Anthony Galvin had no chance against Finish Champion Juha Pöytälaakso when his car lost nigh on all turbo boost pressure, due to a split manifold. He battled hard, but the gulf in power meant it was all in vain. German champion Marcel Uhlig had an advantage over Gary Dunne going into the second run but a straightening moment at the hairpin meant Dunne took the win. Dutch driver Sebastian Fontijn was almost inseparable from Brian Egan after the first run, but Egan chased hard to move into the next round. Just when you thought the top 32 couldn’t get more dramatic, Chris Brady’s rear tyre exploded through a dip in clip 2, giving Barry Leonard the win after a faultless second run. An easy victory for Shane O’Sullivan completed the line-up. 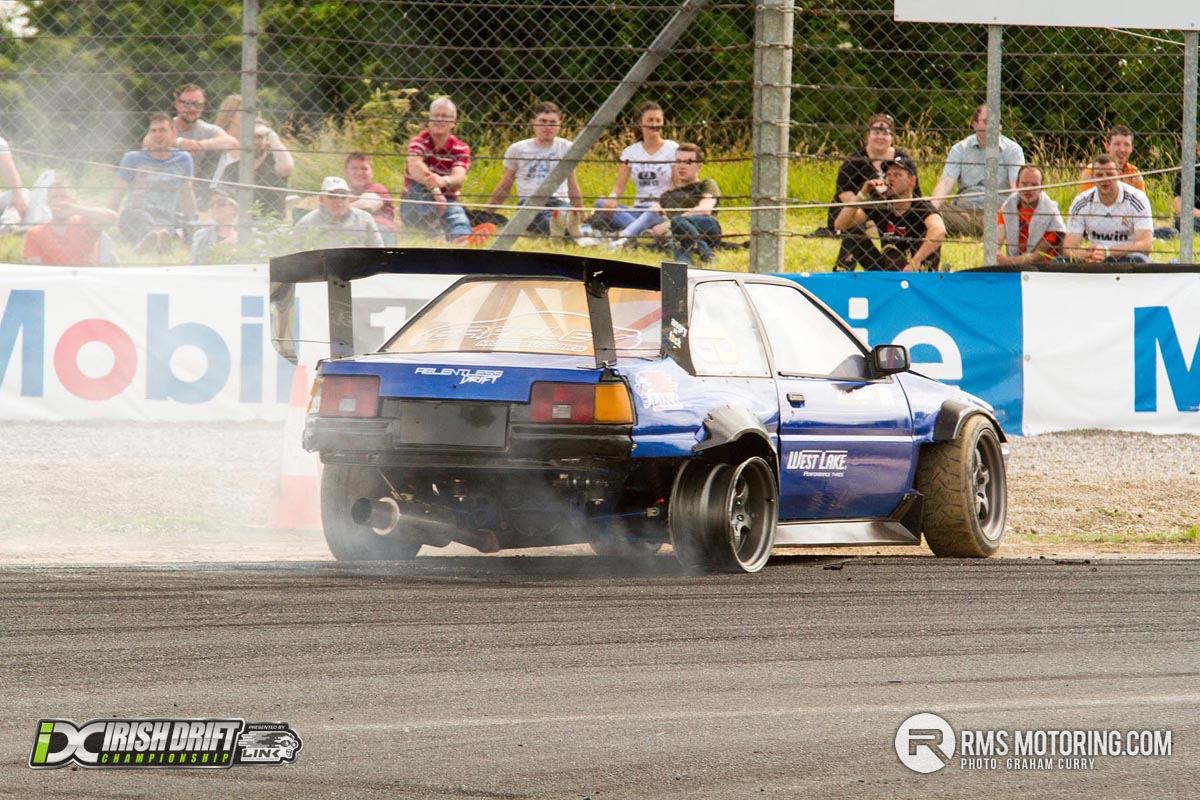 The top sixteen promised even hotter competition and commenced in style with Duane McKeever facing Ollie Evans. Having been pushed onto the grass in run one by Evans, McKeever took an easy step into the great 8.

Peden Nelson ran off the track at clip 2 giving Enver Haskasap full advantage. Haskasap seized upon the opportunity to drive his way to victory in the second run. Andrius Vasiliauskas from Lithuania in his E46 BMW had a phenomenal chase drive against Jack Shanahan however on run two the pressure got to Vasiliauskas as he spun at Mobil 1 bend handing the win to Shanahan.

Next up and Richard Bradley overtook Charlie Geary at Mobil 1 bend, however, things took a major twist on the second run as Bradley came into the hairpin too fast and had a major impact with the tyres forcing him out. Geary, who was revelling in his role as underdog, could not believe his luck. Tomas Kiely fought hard with Fredrik Øksnevad to progress whilst a smoke screen was created around Mondello by Aurimas Vaškelis and Juha Pöytälaakso as they battled hard. Vaškelis was favourite in this one but having snapped the second prop shaft of the day it was Juha to progress.

Brian Eagan dropped two wheels off track on run one and then snapped a tie-rod on run two to hand success to Gary Dunne. A momentary straighten by Barry Leonard on his second saw Mr Consistency, Shane O’Sullivan make the latter stages once again. …and then there were Eight

The first battle of the great 8 saw McKeever send Enver Haskasap back to Cyprus empty handed while Jack Shanahan showed the underpowered Charlie Geary the exit gate. Kiely held his lines perfectly sending Juha Pöytälaakso on his way to the slow boat to Finland. With a slipping clutch, Gary Dunne couldn’t do anything to stop O’Sullivan progressing and it was at this point history had been made – 14 years unbeaten on home soil for the Irish – however, who would take home the silverware?

In what could so easily have been predicted as a final battle, and having faced each other the weekend before, it was Jack Shanahan’s chance to get his own back on Duane McKeever. Shanahan took advantage after run one when McKeever tagged the wall but it was the Dungannon man who once again showed Jack the door. Kiely took full advantage after O’Sullivan failed to initiate into turn one forcing him off the track below the judges and as such all Tomas had to do was bring it home to face McKeever in the final.

We had to wait in anticipation to see who would win as Shanahan and O’Sullivan fought for the final podium spot. After a good battle in the first run, a spin from the leading O’Sullivan handed the last podium spot to Jack. With the grandstands on their feet, McKeever led Kiely into battle and after dropping a wheel at Mobil 1 bend Kiely lost ground and McKeever took the advantage into the second run where he sat door to door with Kiely to take a well-deserved victory and his second consecutive Global Warfare win. McKeever commented, “I am over the moon, I couldn’t be any happier – that is two weeks in a row – I won BDC last week and I won IDC this week”. After a rocky start to the season with his newly built car, I asked if all is good to which he emphatically replied: “Everything’s fixed now and the cars going awesome – yeah I’m very, very happy and hopefully many more podiums to come”. IDC promised drift fans Global Warfare for round three and they didn’t disappoint. The best drivers in the world brought their “A” game to Ireland, but the talented locals upheld Irish honour to remain undefeated on home soil once again.

Cooper replied at 19:57, Tue 04 Jul, 2017
Report
Cracking report @Graham there is no doubt that the standard of driving here is world class and the events are seriously high calibre as well. Hope to make the final in Mondello! 13 Clipping Points... jeez!
StephenDc2 replied at 23:31, Tue 04 Jul, 2017
Report
Great report, I thought I spotted you with the camera from where we were sitting What an event it was, the level of talent and machinery at Mondello never disappoints at the IDC!! Anyone into motorsport or drifting needs to take a run down to one of the events if they haven't already
Cess replied at 06:40, Wed 05 Jul, 2017
Report
You're right. We are lucky that we have one of the most vibrant, exciting and ultra competive drifting scenes in the world on our doorstep. The level of competition, the machinery, the organisation - it's amongst the best in the world. Some great action shots in the gallery. Well wortb checking out.