Test drives are a terrible thing. One day in April I took a run up to see a Lotus Exige V6S. And since then the man maths calculator was on overdrive.

I loved the Evora too. It meant a lot since I had met it brand new. It broke necks rather than turning heads, it was refined, easy to fuel and a lot of fun on a B-road or on track. No logical reason to change then.

Logic was not involved. In comparison, the Exige is cramped, with a much noisier cabin with its roots in the Elise complete with Vauxhall switchgear. But it's lighter, significantly more potent (345bhp vs 280bhp, and 1125kg vs 1350kg), and any possible other comparisons I could draw after my first few minutes of driving it melted away. It is absolutely ballistic. The Evora was ECOTY in 2009, as was this in 2012... makes sense doesn't it...

So the Evora went up for sale, and when I thought it was going to be a slow sell, someone in the owners club snapped it up. Small wonder, it was a great example even if I do say so myself. It felt very strange letting it go, but even more awesome to get it's replacement. So here she is. A Mk3 Lotus Exige, which unlike the previous generation cars is based on the Evora chassis with a significantly wider track, hence as you see above the width of the clam being stretched significantly. Being only 2 years old it's the newest car I've ever owned! A baby!

This makes it look particularly attractive. The Mk3 comes as standard with the same Toyota 3.5L V6 as found in the Evora, with a Harrop supercharger bolted atop, providing stacks of torque across the rev range.

It's blue, the fastest colour. Essex blue in fact, a special order motorsport order colour (#beard) that was first used by Lotus to celebrate the launch of the Esprit Turbo back in the early 80s.

Its a coupé rather than the roadster - so hard top, full aero (ie spoiler, front splitter), but can be quickly converted to roadster which I hope to do down the line for taps aff. Lots of options have been ticked for this car. Most notably it has the Lotus/Bosch developed DPM - a 4 stage traction control system. Race mode will be the most interesting to deploy - it learns the grip levels of the road and gives max power for the traction in cornering. Hard to describe... in fact, I will let Chris Harris describe it better...


There is also apparently launch control. Fun times ahead! 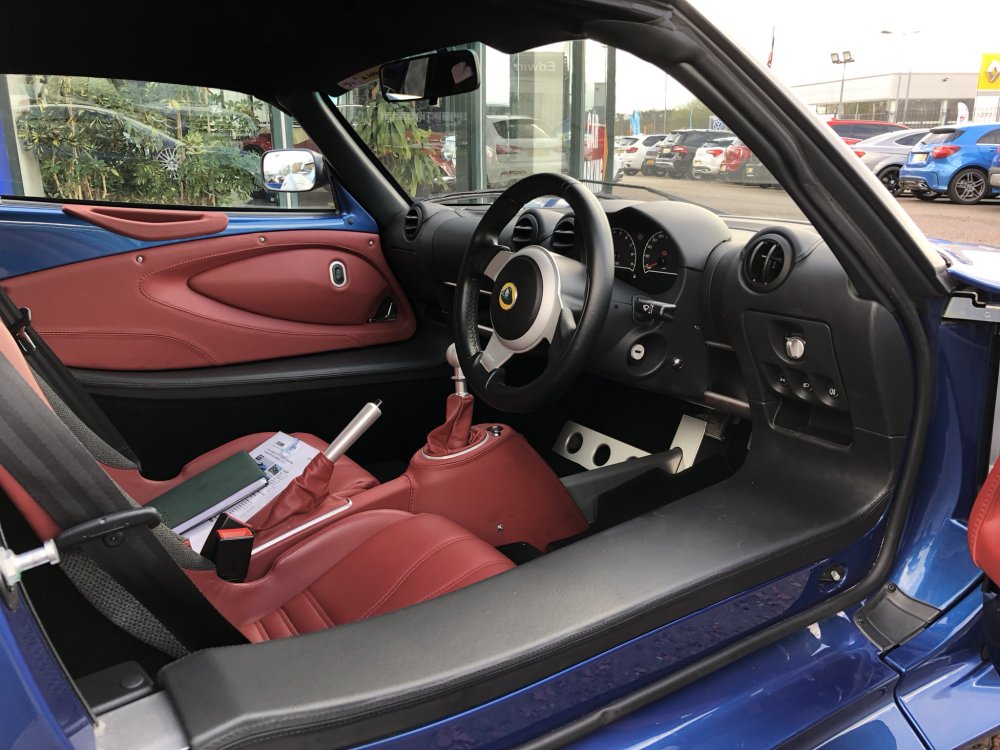 She also has the 'Premium Pack' which of course adds a modicum of weight, but makes the car slightly more bearable to live with on long journeys. Full carpets, leather trim throughout, full leather chairs in optional venom red. I must admit in the photos it looks slightly garish but IRL its actually nice.

The large sill takes a bit of monkey-work to get over but once you are in it's a perfectly pleasant place to be even if you are slightly past the 6ft mark like myself.

It has a fairly pathetic Alpine single din head unit I plan to change out, but does have 12v and USB outlets so it's not totally archaic. It has cruise control and parking sensors- both factory options, which help with its livability although it really is a weekend and special occasion car. Special and occasion are most apt. 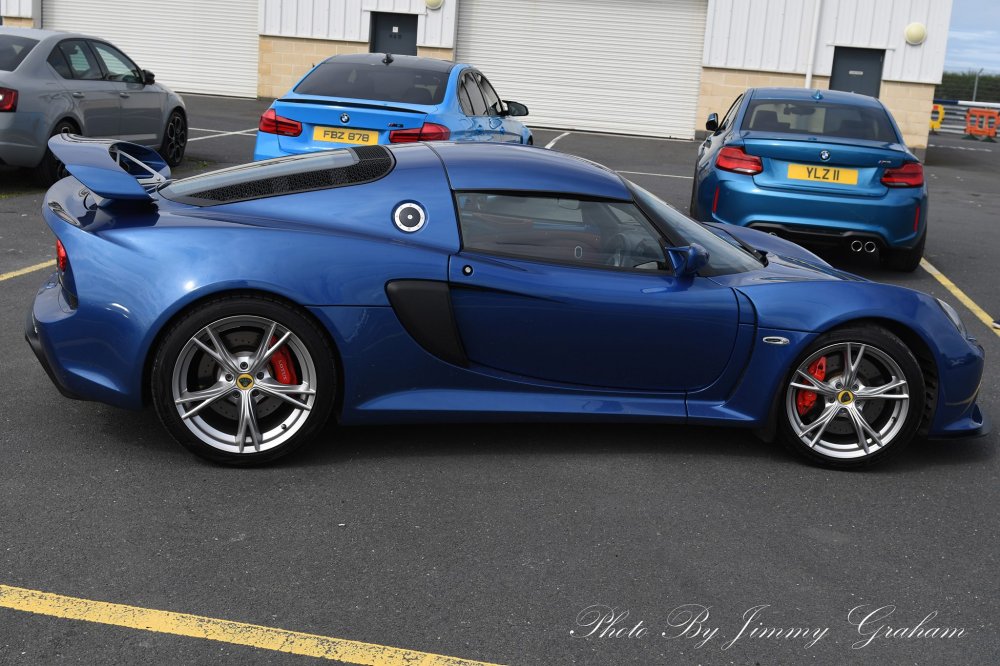 Driving the thing is sublime. Addictive power and sense of occasion, and I found myself driving about over the weekend with the window down. Valved exhaust from standard along with the 'charger means this is a lot louder out of the box than the Evora and it roars on full chat.

I can't wait to put a few more miles on it and then finally get it on track. There's of course plenty of tweaks and mods I'd like to do but driving it is foremost on my mind! 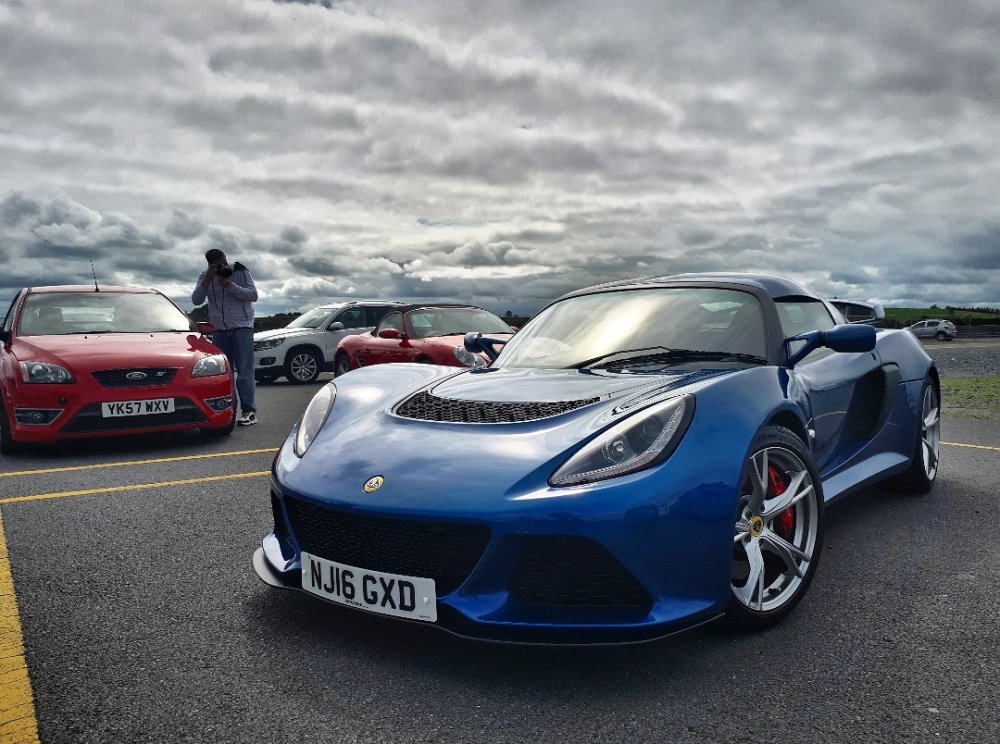 Site Manager · From Belfast
Andy is the founding member of RMS, and when he's not following motoring events around the UK and Ireland he can be found on the track (sideways, having competed in top level drifting for a decade), or of course he'll be on the forum.

Lovely car and a sure fired money holder I think. Also for those wondering, it is virtually identical performance wise to the F80 M3 (so someone told me)

Best of luck with her Andy !

Ps - it’s no Lexus though

chris_b said:
Lovely car and a sure fired money holder I think. Also for those wondering, it is virtually identical performance wise to the F80 M3 (so someone told me)

Best of luck with her Andy !
Click to expand...

I heard that as well lol.

Lovely car, would probably leave most things for dead too!

That is stunning, what a colour as well!

Lovely car but too low for an old guy like me.

Possibly my new favourite car on here. It's looks fantastic! Next RMS outing I'd love a passenger spin out.

It's awesome, but looking at it yesterday there is no physical way I could get into it without breaking myself.

Love the current lotus offerings. A further word on practicalities though: is there a technique for getting in / out? I can’t stop looking at S3 Elise’s for months now but at 6’3” and 110kg I’m thinking it may not be possible!

Absolutely fantastic! I’m sure you can’t stop smiling! Kudos for going for something different too

Odhran said:
Love the current lotus offerings. A further word on practicalities though: is there a technique for getting in / out? I can’t stop looking at S3 Elise’s for months now but at 6’3” and 110kg I’m thinking it may not be possible!
Click to expand...

I'm still working on it.

Thanks for the comments folks. Yes... just awesome.

What I was really getting at was... post a video

That’s a beaut,love the colour !

Absolutely Incredible. Do normal sized humans actually fit in one of these lol?

Absolutely unreal Andy, makes pretty much everything else short of an exotic look aesthetically very tame.

Superb, this is what I hoped was coming when I saw the evora up for sale.

Incredible car, looks stunning but does it go round a cone like the other l**us

Ah. Panic over. Thought you'd gone mentally AWOL after the Lexus post!
Munch those tracks with style and poise and now you can keep the big boys at bay on the straights as well as overtake in corners.
Live long and wear earplugs!

Beautiful! I passed you yesterday just outside Ballywalter and the car looked amazing!

That's a bit special!
You must log in or register to reply here.