Haven’t updated this in quite some time! In truth I haven’t really driven the car since the last update, between rubbish weather at winter and now COVID-19 the car had been SORN for a couple of months.

I did take it to @RubberLover place (Ivan Kerr) just before Christmas for a wheel alignment / cracking set up and really guys down there. Very informative whilst carrying out the alignment - top service! It was the SORN immediately after the wheel alignment and taxed again in March. In the meantime I had been longing after a new set of wheels. The 19 inch Speedlines are a lovely OEM wheel but I wanted something with a better offset to fill out the arches - they also had to be 18 inch. Having had OZ Ultraleggera and Alleggerita on my Clio I was close to buying a set of the latter but couldn’t warm to them on a Megane. I did also like the Evo Corse Sanremo so I ended up buying them at the beginning of January - special order so they took around 4 weeks to arrive from Italy. I went for ET47. Standard wheels are ET65 so the Sanremo fill the arches much better!

Fitted the tyres from the 18 inch Tibor wheels which where fitted to the car from factory and have since removed the stickers. I coated the wheels with Gyeon Rim having used Gtechniq C5 on the last 3 sets of wheels... I had noticed that some careless **** had lightly marked the driver rear quarter. Thankfully the car was booked to have a top up of Exo applied by @big_pete so the guys at PMG kindly removed any trace of the mark and due to COVID they delivered the car back. Top service once again! A couple of days later I decided it was time to remove the Speedlines and fit the new wheels. Whilst removed I quickly cleaned the wheel arches (and decided that I would freshen up the brake disc bells...at a later date).

Out with the old (but recently fitted PS4S which have now covered a grand total of around 40 miles!) On with the new and tyres dressed with Fireball Tyre Wax Them wheels are absolutely incredible on that

I also had ordered up some other bits and pieces over winter. One being a BMC air filter and replacement bulbs as both headlight bulbs had blown. Previous owner had fitted Osram bulbs which in my experience never last so I changed to Philips bulbs. 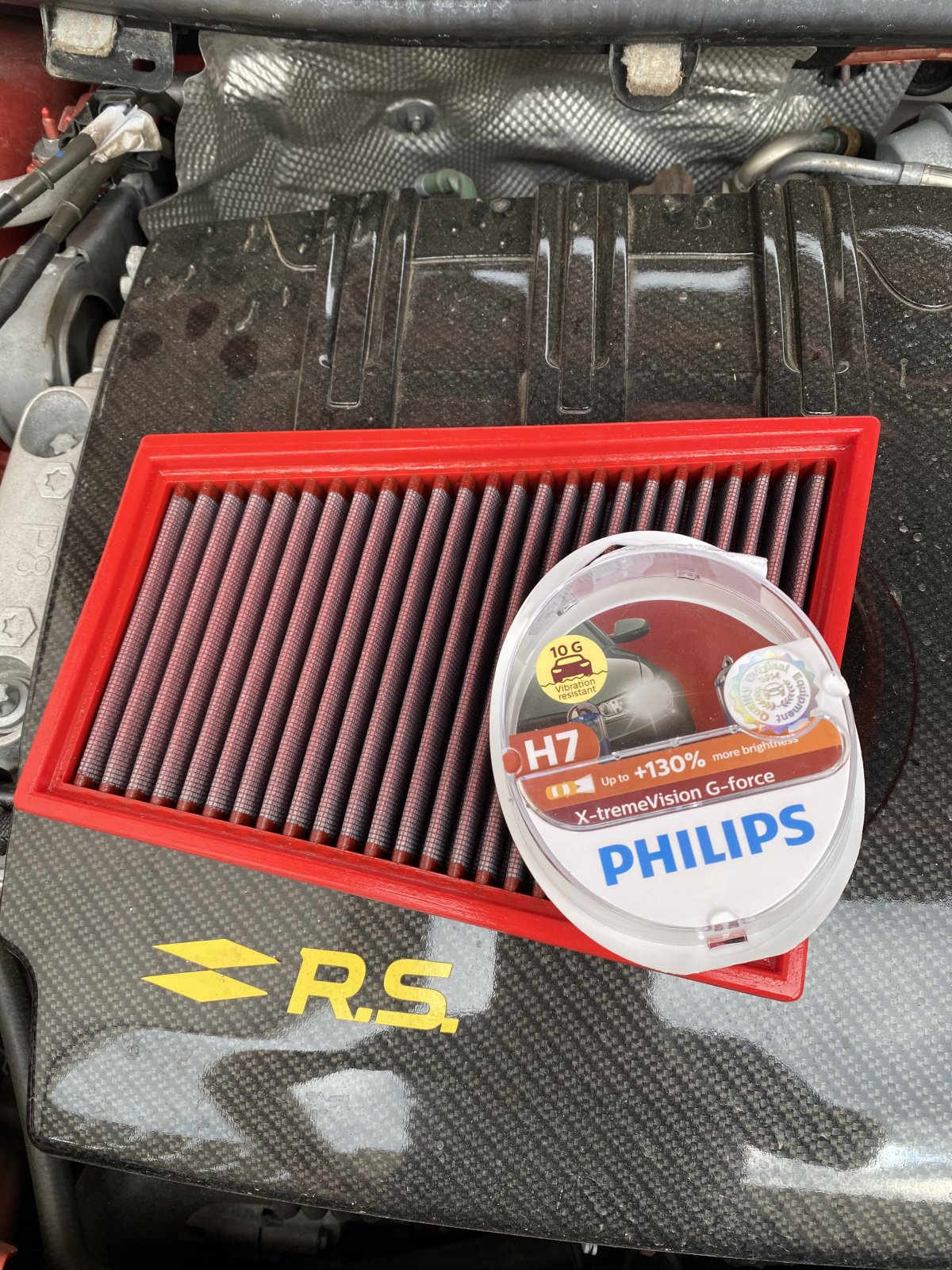 Old & new. Standard filter was only replaced during the last service a couple of thousand miles ago Underside of the bonnet is very dusty. So I spent about 15-20 minutes giving it a quick going over. Cleaned down with some BH Surfex HD, agitated with a brush and rinsed off. Sticker on the battery cover had been annoying me since day one and I bought a replacement a year ago so fitted popped it on Not bad for 15-20 minutes. I love cleaning cars but don’t like cleaning the engine bay so this will do for another while.

I had mentioned previously about painting the brake disc bells. In an ideal world I would have liked the brakes to have been removed and then painted them with a rattle can but I opted for one of the kits from E-Tech. Decent little kit. Comes with paint (obviously), brake cleaner and a brush. The bells are coated black from factory so I kept them black having been considering silver. I didn’t really go at them with the wire brush I didn’t want to be too aggressive so I used the steel wool (have a couple of grades), cleaned up with brake cleaner and got to work. I applied two coats leaving around 30-40 minutes between coats. That’s it for now.

Up next I will coat the plastics on the front end with Gyeon Trim. I also might try my hand at wrapping the interior vents etc in piano black wrap if anyone has any tips on how to do this?

big_pete said:
Them wheels are absolutely incredible on that
Click to expand...

Cheers Pete! Very pleased with them and the lower offset really helps

dh1079 said:
New wheels are perfect on it and it’s sitting mint buddy
Click to expand...

Thanks a lot mate

looks great that, love the colour of the car. Wheels look the part also. Considering buying the Gyeon trim, have you used it before?

Lee A said:
looks great that, love the colour of the car. Wheels look the part also. Considering buying the Gyeon trim, have you used it before?
Click to expand...

Cheers! I haven’t used it before. Will probably be the weekend before I get round to applying it, will update this once it’s applied

Cheers Jordy! Love what you’ve done with the Golf

Not a hugely exciting update but service time has come for the Megane.

With the car turning 4 in July it is due a major service. Despite only having 13,200 miles I’m changing everything that is due at this age/mileage. So new engine oil, oil filter, pollen filter, spark plugs and gear oil will all be renewed. Seems a bit of a shame to change oil that has only covered 1,300 miles since its service this time last year! For years I have just stuck with OEM ELF 5w40 but Renault recently changed to Castrol and I decided that I would have a look at other options too! Two names kept appearing, Fuchs Titan Race Pro S and a Millers alternative - in the end I went with Fuchs.

Will hopefully have the service carried out by the end of next week and have promised myself to cover more miles this year! Other than the above the only other thing I have done to the car is fit a KTec induction kit. I had bought an ITG previously but the front bumper needed removed and the filter sat very low and was susceptible to flood and standing water so I picked up the KTec alternative. Bit of messing around to fit but looks pretty tidy in the bay. What do you think of the fireball tyre wax? Did you get it local?

stevey_boy said:
What do you think of the fireball tyre wax? Did you get it local?
Click to expand...

Think @Woodcutter does the fireball range. I've tried the shampoo and the hydrophobic snow foam and the products seem great.

NickR85 said:
Think @Woodcutter does the fireball range. I've tried the shampoo and the hydrophobic snow foam and the products seem great.
Click to expand...

We let the Fireball brand go last year as getting stock was a disaster. We now stock Gyeon instead and it has been superb for us.

They do 3 Tyre products, first a tyre cleaner, then an Si02 based tyre shine which is amazing. They also do a Tyre Express product for regular use.

Cheers for the comments!

@Boydie Yes wheel nut covers and either replacement standard bolts or lock nuts will be ordered to replace the rusty lock nuts.

@stevey_boy The Fireball tyre dressing is good but there are better alternatives out there. I’ve applied it to a few different tyres on different cars recently and found it didn’t last all that long. I would use Wax Planet Black Brite now but would occasionally use Gyeon Tire Express (which is very good considering it can be applied to wet tyres) though again it wouldn’t last too long. Gyeon Tire is meant to be very good also but I haven’t tried it yet!
You must log in or register to reply here.
Share:
Facebook Twitter Reddit Pinterest Tumblr WhatsApp Email Link
Top