You are at:Home»News»French Connection For Carryduff Business
By Graham Baalham-Curry on November 11, 2021
Tweet

I recently caught up with the owner of a small business in Carryduff that’s supplying the world.

Motorsport is something that runs through the veins of many of us on the Emerald Isle, not least Lisburn man Raymond Moore, who operates a successful motorsport supplies business alongside his wife, Colleen, and two full-time members of staff, Jonathan and Ryan, named Race & Rally.

A journey that started for the Donegal native just after the turn of the millennium, when he became the UK and Ireland distributor for French manufacturer rally teams Citroen Racing and Peugeot Sport, the business has evolved into supplying niche motorsport parts to a lot of the English-speaking world. 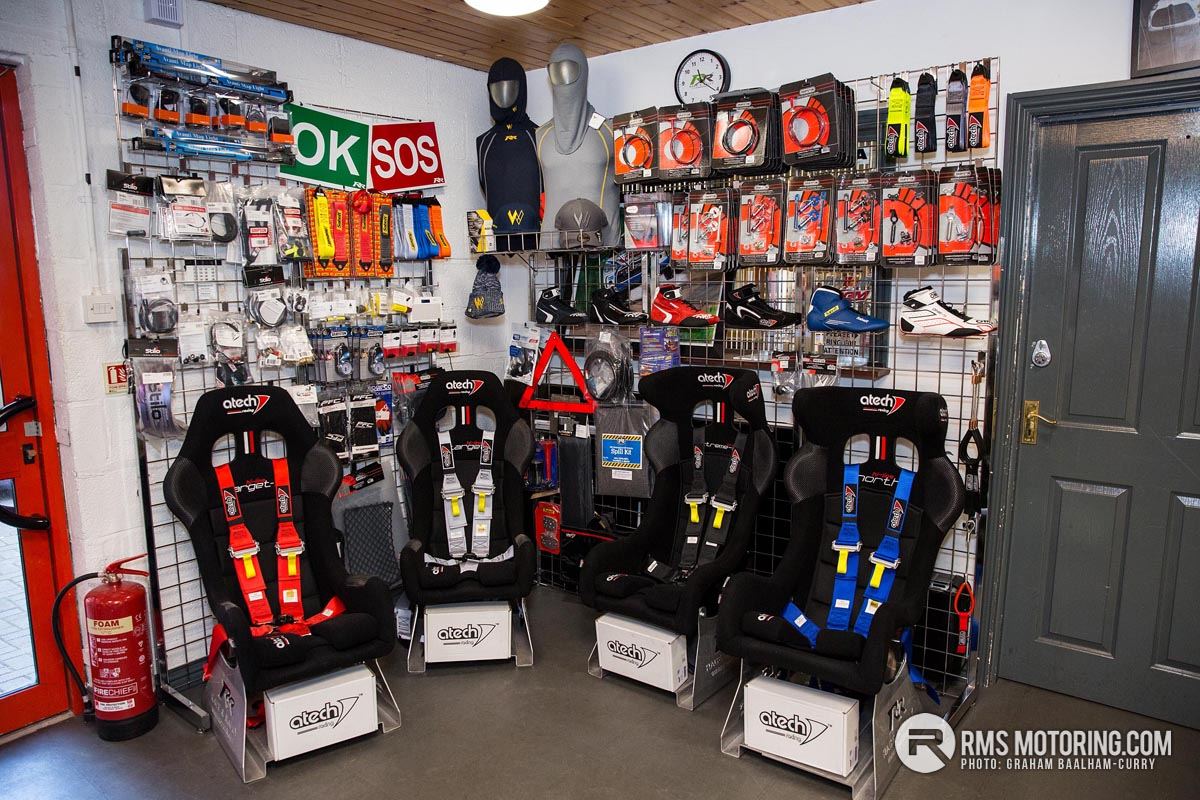 Raymond started when the Citroen Saxo was prominent on the junior world rally scene. Soon after that, things started to get busy. The Citroen C2 R2 became popular in British and Irish rallying, not just because it was somewhat affordable to rally, but also because Citroen Sport put up good prize money for those winning events and championships.

The rest, as they say, is history, as the progression of the automotive industry and Citroen Racing saw the launch of the DS3 model onto the rally scene. It was this car, in World Rally guise, that Dungannon driver Kris Meeke drove to five event wins on the World Rally Championship and a car that became hugely popular with private drivers locally in two lesser specs.

Young drivers from across the British Isles campaigned regional, national, and international championships in the front-wheel-drive R3 category, with many of them progressing into the R5 category which allowed them to experience four-wheel drive, and with it, fight for event wins against some ageing 2.0-litre World Rally Cars in national championships. 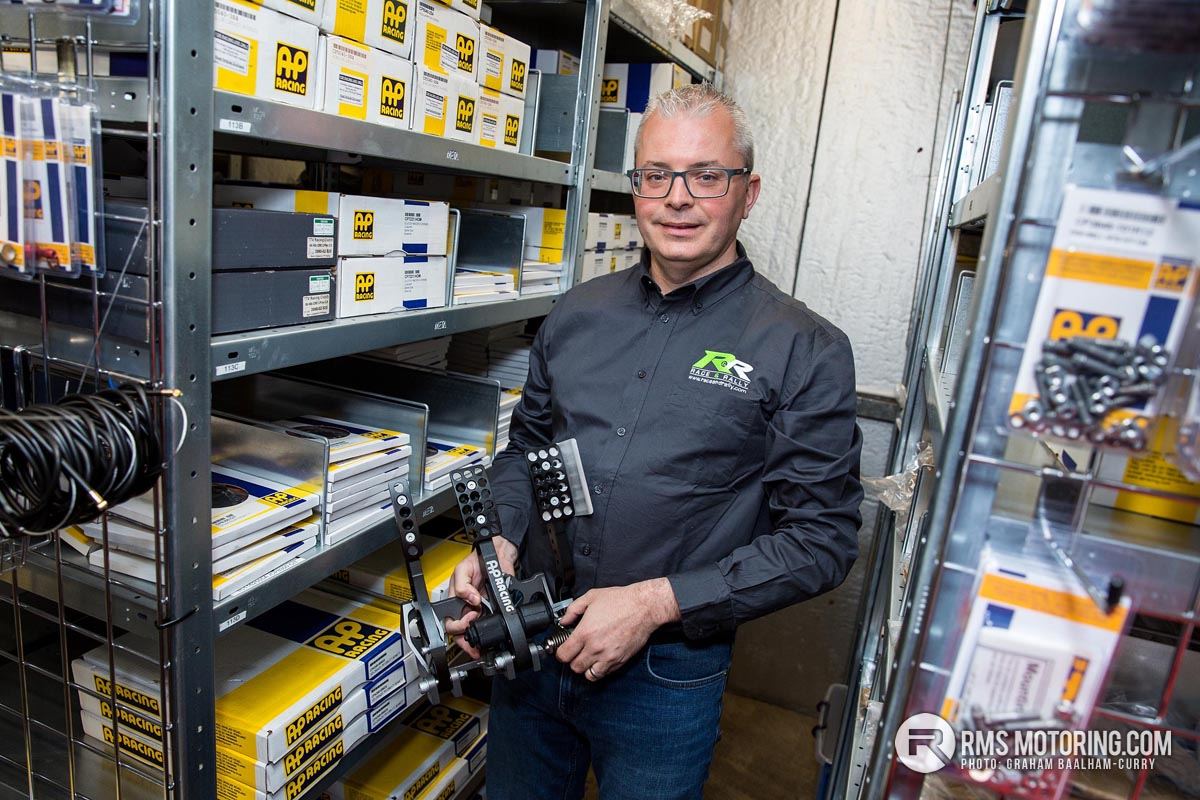 Working alongside DGM Sport, who Race & Rally share premises with, if you had ordered a DS3 R5 from Race & Rally a couple of years ago, it was most probably built in the workshop in Carryduff by DGM technicians who spent some time training in the French factory enabling them to build factory certified customer cars.

Nowadays, all factory cars are built in France, cars that include the Citroen C3 R5 as well as the Peugeot 208 in R2, R4 and R5 trims. The most recent new-car order for Race & Rally was to provide a 208 R4 to a customer in Cyprus, a car that after some testing impressed so much, that further orders to Cyprus seem imminent.

Many customers see Race & Rally as the perfect intermediary for a language barrier that stands between them and the French supply chain for factory replacement parts, so moving the business online a couple of years ago has allowed this Northern Ireland distributor to add regular customers from Cyprus, Turks and Caicos and Barbados to name but a few. The Peugeot Sport story expands more recently for Raymond due to the fact that some racing drivers in Britain are starting to use Peugeot 308 TCRs. Meaning Race & Rally now have the opportunity to provide the parts required to keep these guys on the grid, affording them extra knowledge outside rallying and of running cars within the racing fraternity.

Over the years, Raymond and his team have expanded the business to bring key brands to the market. Brands such as Atech Racing, that provides seats and harnesses.

“Atech used to make all the seats for OMP and Sparco,” Raymond said, “but with insight and demand, they designed, developed and patented a unique seat of their own.” “The Atech seat offers a curvature, allowing for a more laid-back and relaxed driving position which has become very popular with rally drivers. So much so that the vast majority of World Rally Championship recce cars run this seat. For those who run them in their competition cars, it is well reported that when landing after a crest, the impact isn’t anywhere near as harsh on your body as the curvature absorbs the pressures involved, instead of your spine.”

It’s all well and good being comfortable in your cars seats, as well as being able to go up and down the gears confidently, but when it comes to stopping there is no better than AP Racing brakes. Race & Rally is now in its second year of being an AP Racing distributor. 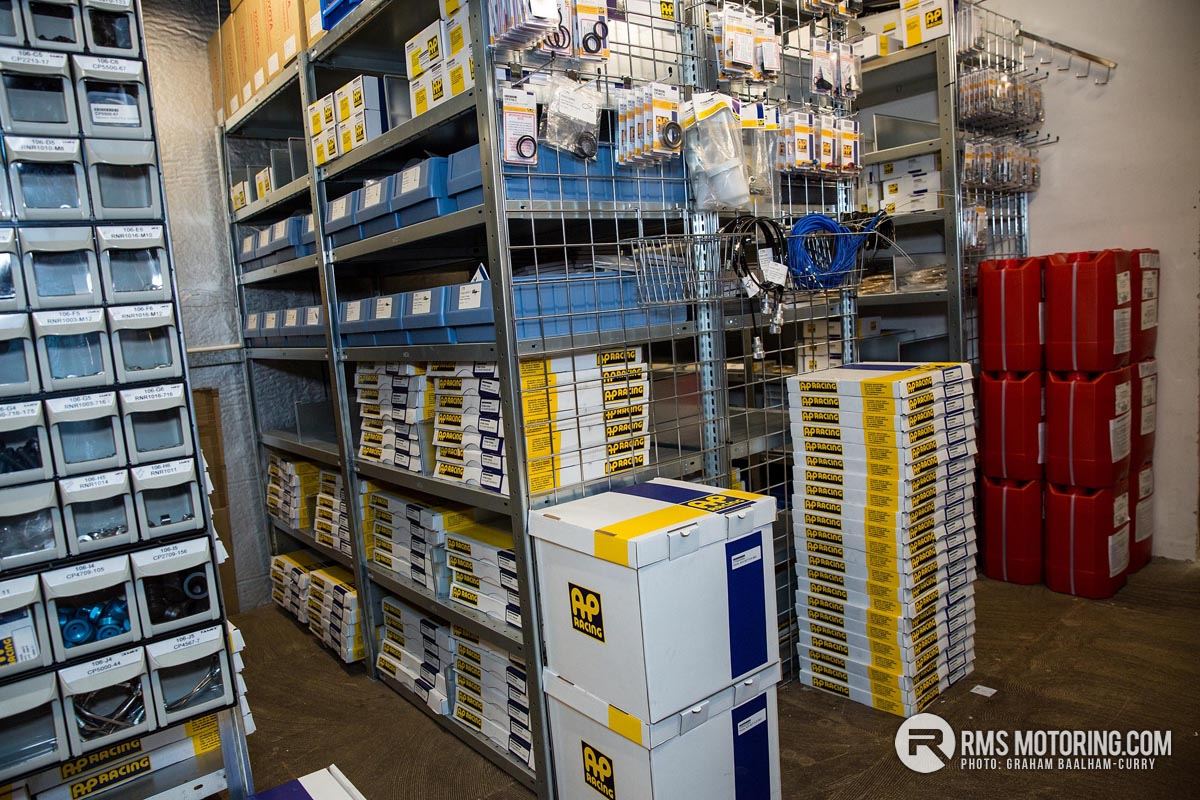 Raymond commented, “AP Racing is proving to be very good for us. It fits well into our product range as it is a very high quality product.

“Everything from brake calipers to brake discs is covered and should you need a kit designed and specified for your vehicle, especially fast-road and track vehicles, that is something we can offer. There are also pedal boxes and clutch kits, including carbon clutch kits which is something we have never offered before and everything else down to cylinders, fittings, fixtures and the fluids required for your application.”

Technology stemming from NASA is used in Walero fireproof underwear which is another product highly rated by Raymond and his team. 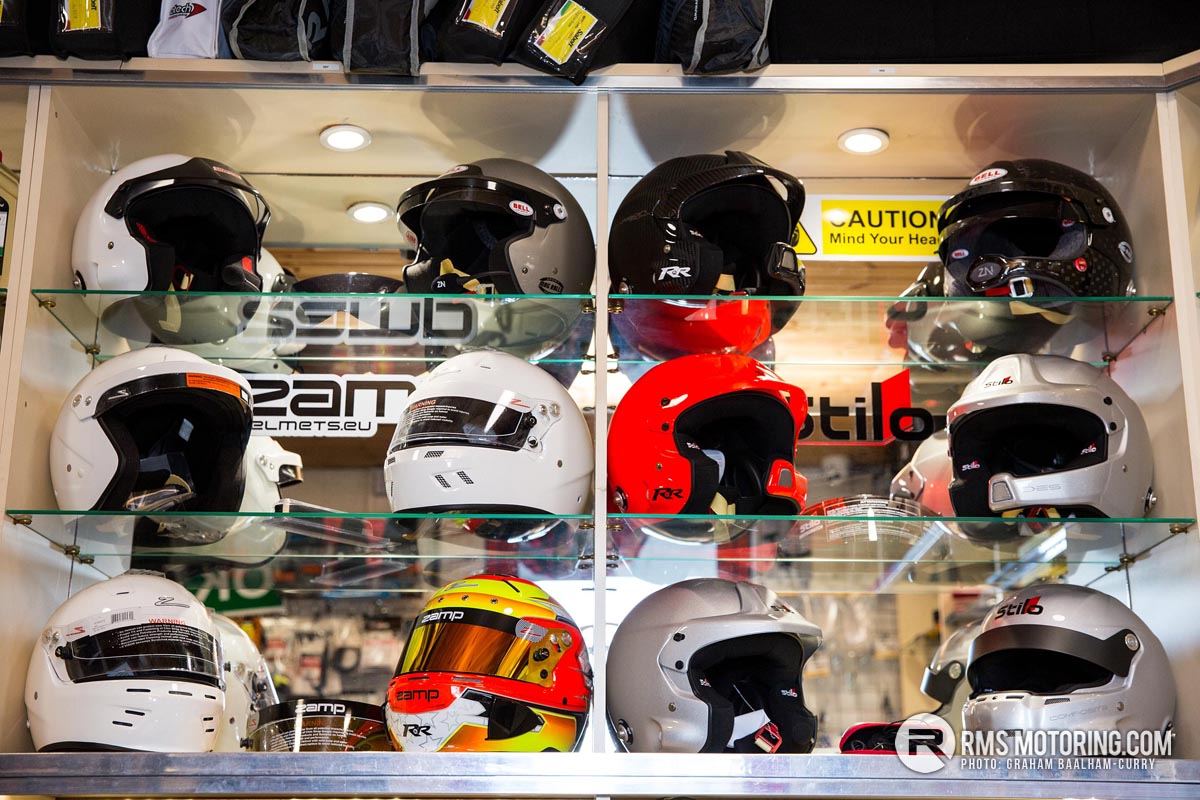 “This clothing helps regulate your body temperature,” Raymond explains. “If you leave your air conditioned Barbados hotel room in the morning whilst wearing your Walero gear, it helps to keep you cooler and to regulate that lower temperature for the rest of the day, despite sitting inside a very warm rally car.

“It will do the opposite in colder climates, so if you are running in Sweden on the snow and you leave your warm hotel room, it will help to keep you warm for the rest of the day. The feedback from drivers is very encouraging on this range.”

When it comes to protecting your head, Stilo helmets have always been at the pinnacle of safety equipment within four-wheeled motorsport, and their intercom systems are second to none when it comes to rallying. 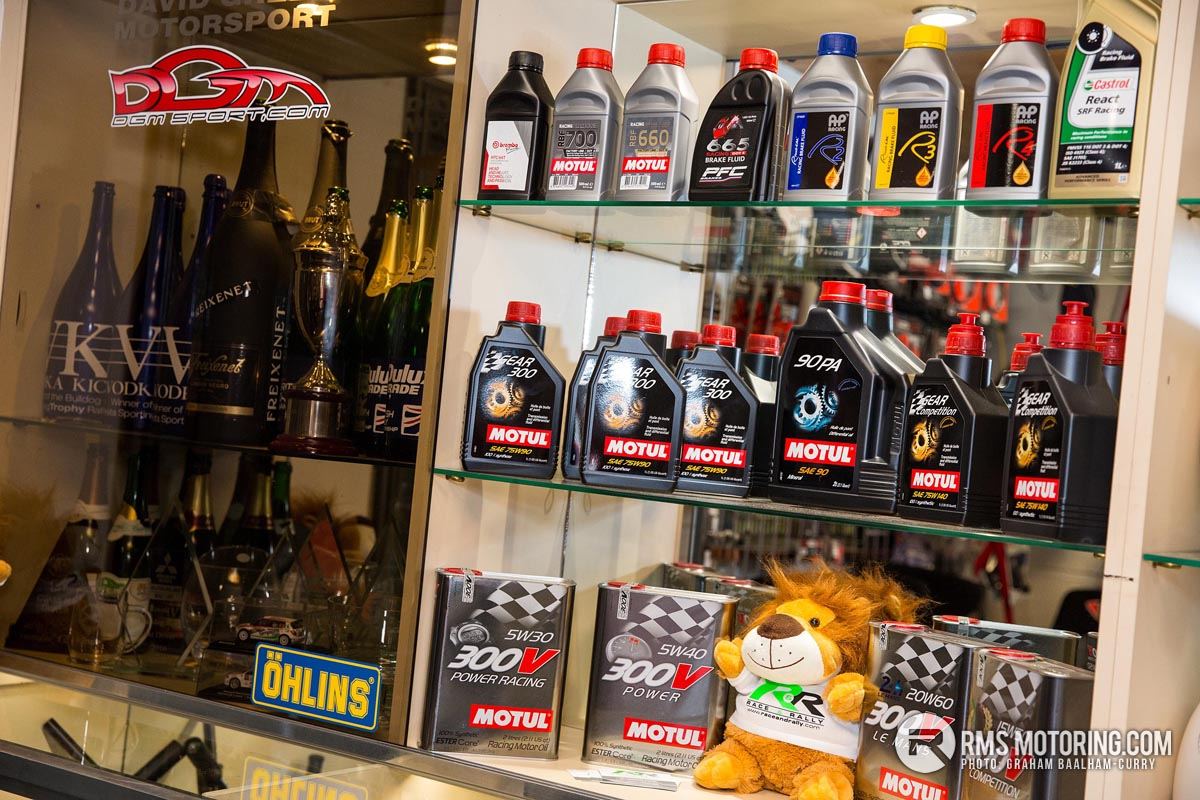 Sticking with their tried and tested method of providing quality, needless to say that Race & Rally has you covered with Stilo equipment as well as Bell helmets. Bell has made a return to rallying within the last year and from feedback on the stages, the helmets are very comfortable to wear with slightly softer materials used.

Motul lubricants is another high-end product that Race & Rally provide. “We are finding that across the classic performance car market as well as the motorsport end of things, Motul is proving to stand the test of track and stage,” Raymond stated.

“I first came across Motul via 3MO gearboxes who recommended it, and since then Marcus within DGM Sport, who rebuilds gearboxes running Motul, has noted just how good the oil has looked after the internals whenever he has stripped gearboxes for inspection.” Raymond continues, “Bobby Sharkey in Donegal is another gearbox expert and his feedback is fantastic as he maintains that he can see less wear in a gearbox which has been using this particular oil.”

Goodridge hoses, fixtures and fittings are something else Race & Rally can tailor to your needs with the ability to custom fabricate a vast array of specs and sizes to suit whatever it is you are building, breaking, or restoring.

Lighting the road ahead is another thing covered by the Carryduff business, in particular Lazer high performance lighting that can be fitted to road vehicles for massively increased visibility, be it on a recce car, or on a working van or jeep. The Lazer range isn’t cheap by any means, but their performance cannot be beaten and they are seemingly bulletproof.

“Everyone who has bought them raves about them, and even lads that have been through a hedge with them fitted say that despite the front end of the car being smashed hard, all they do is replace the mounting brackets and the lights themselves survive to see another event.”

It is clear to see that Race & Rally have a wealth of technical knowledge and in conversation, something interesting came to light. I learned that a customer in England has approached the team to get a gearbox tailored for a custom Electric Vehicle that is destined for the challenging Pikes Peak hillclimb in America! 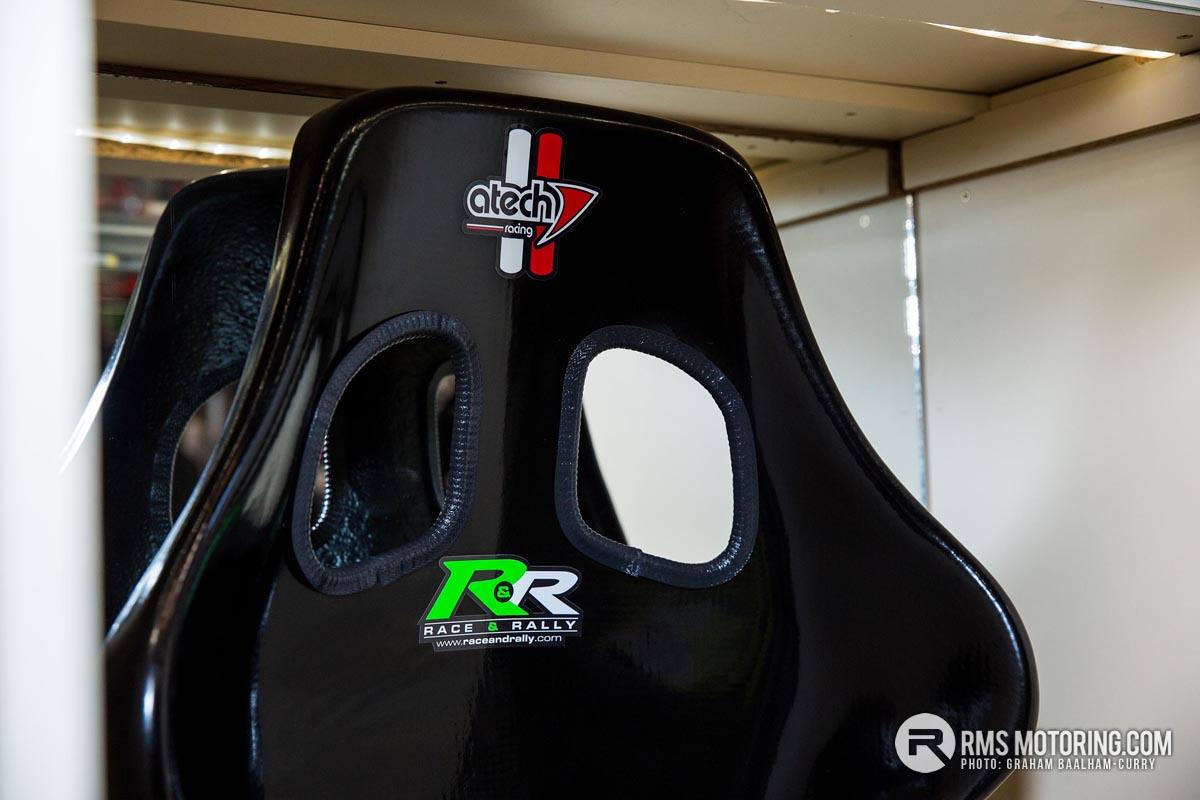 On that electrifying note, it will be interesting to see what becomes of the future of the sport, especially as PSA group who own Citroen Racing and Peugeot Sport, has bought over several other makers, including Opel and its vast motorsport division, all of which sits under the new Stellantis group.

I am certain this won’t be the last time I get to chat with Race & Rally in the coming years and who knows, maybe I will be able to bring you coverage of some electric rally cars in the near future. II do hope so.